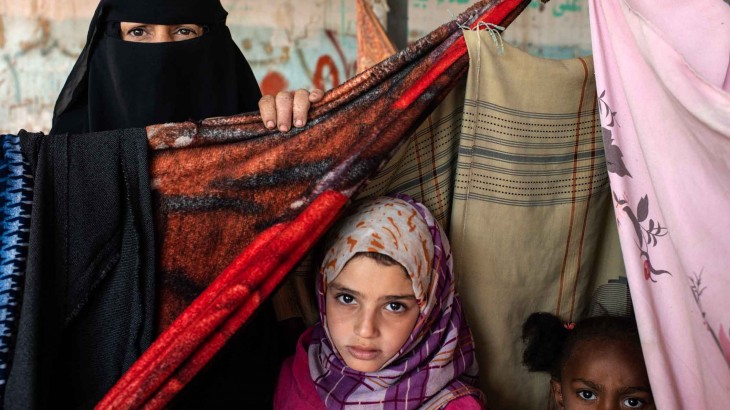 For the last two years, Freya Raddi has overseen the ICRC's assistance programmes in Yemen. As she finishes her mission, the aid worker says she wants to return to Yemen one day, but not as a humanitarian.

Yemen gets under your skin. It's the people more than anything. Their smiles, their tears, their strength and most of all, their generosity.

I remember one lady who invited me to her house. I say house, it was actually a solitary room with four or five mattresses on the floor. She showed me all the medicine she had to take and we had a chat.

She made two cups of tea. I started to drink mine and realised she wasn't drinking hers.

"The second cup is for you. You have to drink both as I can't give you anything else," came the reply. She had next to nothing, yet still gave me everything she could.

Yemenis have endured so much in the last five years. In a country where around half of the health facilities are functioning, coronavirus would impose great challenges for the country.

There are different levels of vulnerability everywhere in the world. But in Yemen there's an active conflict. People are displaced and wounded. They have limited access to food and basic services.

All measures to prevent the virus from spreading in the country are necessary. The health picture is bleak enough as it is without this added danger.

When I started my mission with the ICRC two years ago, I quickly became accustomed to waking up to the sound of explosions. In the afternoon, yet more blasts. In the evenings too.

The insecurity makes humanitarian access very difficult. Yet we always try to respond to emergencies in areas close to the frontlines with a response that benefits people in the short and long term.

However, it is challenging and time-consuming to negotiate humanitarian access with the different parties to the conflict. Sometimes I would receive phone calls in the middle of the night from contacts, checking that trucks passing through a checkpoint were ICRC trucks. Or phone calls warning of possible security issues.

We are not always successful. In Al Jawf Governorate, clashes have intensified of late, hampering aid efforts – a Yemen Red Crescent Society ambulance couldn't carry out a medical evacuation due to lack of safe access. And we were unable to supply Al Jawf Public General hospital with surgical and medical supplies, for the same reason.

A couple of weeks ago we did manage to get to the town of Marib, some 100 miles east of the capital Sana'a. The town has seen an influx of people in recent weeks due to an escalation in the fighting in the surrounding area.

I remember Marib from when I was in Yemen during the nineties studying Middle Eastern Studies. Back then it was a small village. Today it is a booming city with oil and businesses. It also has more than 90 camps for people uprooted by conflict. Together with the Yemen Red Crescent, we distributed food and aid for around 70,000 people.

In one of the camps I met a child who told me to come see their house. The house was a tent. The tent was home to five families, each with their own children.

I sat and spoke with the women. Women may not be that visible in Yemeni society, but theirs is an important perspective and they should not be overlooked. They have the burden of the family and the situation on their shoulders.

They told me their stories. They had all arrived within the last 48 hours, all of them had been uprooted by the conflict two or three times.

Every time you are displaced you lose possessions and your vulnerability increases. One family I spoke with was originally from Hodeidah, some 250 miles away. They'd travelled from Hodeidah to Hajjah, Hajjah to Al Jawf, Al Jawf to Marib.

They barely had anything with them from their past life. They had no means to rebuild their existence. The aid we gave them helps them to survive. Nothing more. Yet somehow, they were still able to smile, still able to find some normality in their situation.

Marib gave me one final heart-breaking taste of Yemen. In my 17 years in the humanitarian sector I've worked in various conflict zones. They all have one thing in common: it's always the civilians who pay the highest price.