Yemen: Thousands of people in need of food and shelter as fighting intensifies 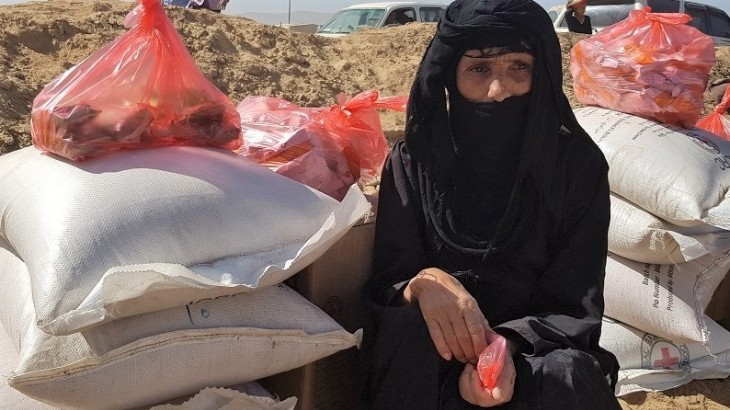 A woman in Maarib waiting for support to carry distributed assistance back to her shelter. Iscander Al-Mamari/ICRC

Sanaa/Geneva (ICRC) - Intense fighting on the frontline between Sanaa and Al Jawf Governorate in Northern Yemen has displaced tens of thousands of people to Marib Governorate, leaving families without food, shelter, and access to medical care.

Marib Governorate already has a large population of displaced people, and their needs, whether they are newly-displaced or long-term residents of camps, are staggering.

The International Committee of the Red Cross and the Yemen Red Crescent Society have helped around 70,000 people, or 10,000 families, by providing food, tents, blankets, jerrycans, basins and hygiene kits. Additionally, the ICRC provided surgical material and medicine to Marib Commission Hospital and body bags to The Yemen Red Crescent Society to facilitate the dignified treatment of the dead in support of health facilities.

“I’ve met people from all over the country who fled to Marib. Some have been here for days, others for weeks, months or years. The lucky ones have joined family and friends while others have been forced to leave everything behind. Time and again Yemenis are being forced to flee, leaving behind loved ones, losing their homes, keeping only their hope,” said Mariateresa Cacciapouti, head of the ICRC’s sub-delegation working in Marib.

In Al Jawf Governorate, increased clashes have hampered efforts to help patients and those in need. A Yemen Red Crescent Society ambulance was unable to carry out a medical evacuation due to lack of safe access and the ICRC was unable to supply Al-Jawf Public General hospital with surgical and medical supplies, for example.

“In a country where barely half of the health facilities are functioning this is very worrying. We remind all parties to the conflict that access for health personnel is essential and that facilities must be kept open and never targeted during military operations. Medical staff, ambulances and health facilities must be always protected,” said Fabrizio Carboni, ICRC Regional Director of Near and the Middle East.

The ICRC is closely monitoring the situation and is deeply concerned about the impact of the intense fighting on people in an already extremely fragile state.

We urge the parties to the conflict to take every possible measure and precaution to protect and respect civilians. Special attention must be given to those who are already in a vulnerable situation, living in displacement camps and at risk of being affected by the shifting of frontlines and direct fighting.

For more information, please get in touch: