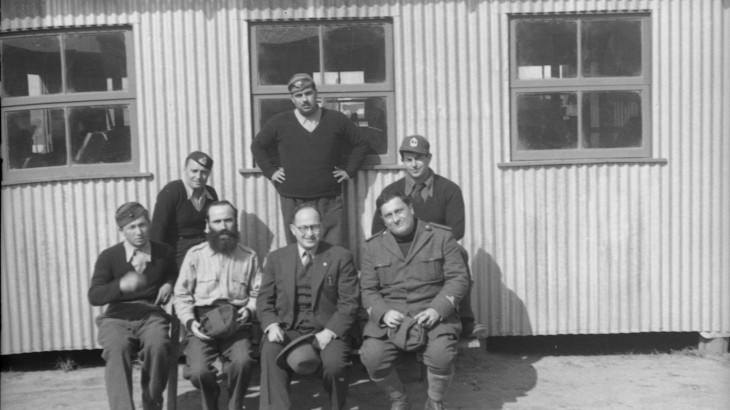 It’s a little known fact that during the Second World War, Australia operated internment camps in all of its states. The camps, located in areas as remote as Rottnest Island off the coast of Western Australia and Brighton in Tasmania, were established as part of a policy to detain residents posing a threat to national security, appease public sentiment against “enemy aliens,” and to house thousands of overseas internees, including prisoners of war (POWs), who had been sent to Australia.

According to the National Archives of Australia, at its peak in 1942, more than 12,000 people were interned in Australia. Overall, approximately 7,000 residents were interned here, while a further 8,000 internees were sent to Australia after being detained as far away as Britain and the Middle East. The legal basis for Australia’s wartime internment policy was the National Security Act 1939, which allowed the government to issue a series of regulations empowering authorities to control nationals of countries at war with Australia. While the indefinite internment of enemy aliens was initially intended to be an exceptional practice, further into the war it became more generally applied. In fact, after the intervention of the Japanese Empire into the war in 1941, Japanese nationals in Australia were interned en masse.

During the Second World War the ICRC visited internment camps in most of the warring countries to monitor what was happening to the captives and to improve their conditions of detention. In 1940, following increasing transfers of POWs and civilian internees from Great Britain to Australian camps, the ICRC decided an Australian-based delegation was necessary. While the Australian Red Cross took the lead in the local humanitarian response to the war – including through its Bureaux for Wounded, Missing and Prisoners of War in each state – it was the ICRC’s responsibility to visit the Australian camps due to the organization’s mandate in the Geneva Conventions.

After many months of negotiations with the Australian Government, the ICRC’s proposal for a local delegation was accepted in early 1941. Australia hosted three ICRC delegates during the war, with the longest-serving representative being Dr Georges Guillaume Morel, a multilingual doctor of economics. In line with the ICRC’s impartial mandate, the delegation’s key concern was the fate and protection of all interned POWs and civilians in Australia, regardless of race, political affiliation, or religion. While visiting the camps Dr Morel encountered diverse populations including enemy naval personnel and crews of merchant ships captured in Australian waters, Jewish refugees from Nazi persecution who had been living in Britain but were transferred to Australia, and Australian residents of German, Japanese and Italian origins, among many others.

At the outbreak of the Second World War, there was no international convention covering the treatment of interned civilians, despite nearly two decades of efforts by the ICRC in this regard. A draft convention containing 40 articles had been approved by the International Conference of the Red Cross in Tokyo in 1934, but finalization of this “Tokyo draft” was postponed on account of the war. In the absence of a formal agreement, late in 1939 the ICRC negotiated with belligerent nations for the 1929 Geneva Convention on Prisoners of War to be applied to interned civilians. Conditions in the Australian camps were maintained in accordance with the relevant articles of the 1929 Convention, along with a combination of National Security Regulations, Statutory Rules and Orders and Camp Regulations and Rules. However, many practices and policies were also introduced through negotiations outside these frameworks relying on reciprocal arrangements with enemy nations. While this led to some positive outcomes for detainees, reciprocity could also be invoked negatively. Threats of such reciprocal treatment were illustrated in a cable from Australian Red Cross to the ICRC in September 1942 which read: “deeply concerned press reports that German authorities contemplating restrictions on incoming letters addressed our POW as reprisal for non-receipt letters from German POW in Australia.” The cable refuted the reports that German POWs in Australia had been prevented from receiving packages and requested that the ICRC make immediate representations to German authorities to rectify the situation.

Dr Morel carried on his role until October 1945 when he fell ill and died after an emergency medical operation. His wife Eugenie temporarily filled his position until the arrival of new delegate Pierre Descoueudres in May 1946. Many of the camp’s internees were released before the end of the war and others were allowed to leave detention after the hostilities ceased. In a Sydney Morning Herald news report in March 1944, a little over a year before his untimely death, Dr Morel shared his perspectives on the activities of the Red Cross in wartime, saying they were “a tribute to our civilization and a token of our spiritual maturity.” While the Red Cross indeed brought the light of humanity to many during the war, there were also countless others it was unable to assist. The devastating events of WWII, in particular the genocide perpetrated by the Nazis, highlighted the necessity of an international agreement protecting civilians in wartime. Fifteen years after the initial Tokyo Draft, the international community ultimately agreed upon the 1949 Geneva Convention (IV) relative to the Protection of Civilian Persons in Time of War, a treaty signed by Australia in January 1950.

Fast forward more than half a century and the ICRC continues to work with the Australian and other Governments on how to better protect detainees in situations of armed conflict. As part of the Strengthening International Humanitarian Law project, the ICRC is leading a major consultation process with States, including Australia, on how to strengthen legal protection for persons deprived of their liberty, particularly in relation to non-international armed conflict, which in comparison to international armed conflict is very limited. The Strengthening IHL project aims bolster the law in four key areas: conditions of detention, protection for especially vulnerable groups of detainees, grounds and procedures for internment, and transfers of detainees from one authority to another. The consultation process will inform a report setting out recommendations for a way forward, for consideration by the International Conference of the Red Cross and Red Crescent in 2015.

Christine Winter, Limits of impartiality: The delegates of the International Committee of the Red Cross in Australia during the Second World War, History Australia, Vol. 10, No. 2, 2013, pp. 56-74