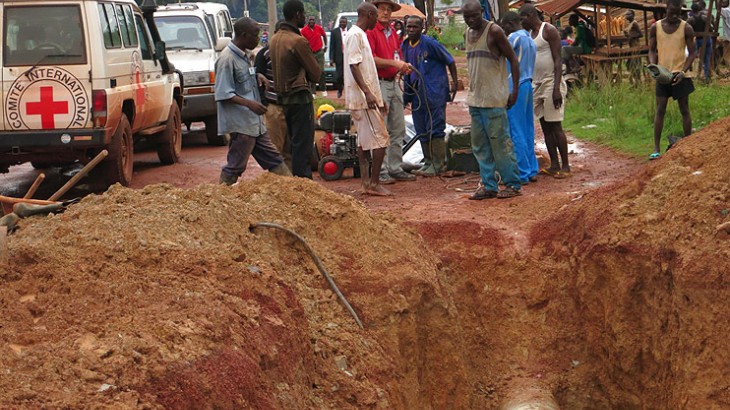 Tensions mounted in Bangui again last weekend when demonstrations by armed men blocked roads, bringing traffic in the capital to a standstill.

The events are part of a rising wave of violence and looting which has gone on unabated and unchecked since October. Many people have fled for a second time to camps for displaced people, even though the lack of aid there has made living conditions very tough.

“There’d been no aid deliveries for several days, and food and water were running short. The situation was becoming desperate,” said Mathias Yadjemal, who runs the camp at Castors.

Getting aid to people that are relying on it, especially the sick, the wounded and the displaced, has been made even harder because of repeated threats to humanitarian workers and restrictions stopping them from moving about the city freely.

“We are very worried by this latest deterioration in the humanitarian situation and its impact on civilians. Once again, we call on all parties to facilitate the work of humanitarian organizations,” said Jean-François Sangsue, head of the ICRC delegation in Bangui.

In many places, humanitarian workers could not get through to deliver food aid to displaced people for almost a month. For many among them, that meant going without food for several days as food rations ran out. Out of solidarity, the people who had been in the camps the longest shared their rations with the latest arrivals, but there was not enough for everyone. However, since 27 October, thousands of displaced people in seven camps to the south of Bangui have been receiving weekly food rations again from the ICRC.

Many sick and wounded people could not leave their homes to go to a health centre because it was simply too dangerous. Medical workers could not reach these patients either after receiving threats. Despite this, the ICRC has managed to maintain a surgical team at Bangui community hospital since the beginning of the crisis.

The water supply is still cut off in some neighbourhoods, leaving many local residents and displaced people without clean drinking water. The situation was made worse during the latest outbreak of fighting as it slowed down work by the national water board (SODECA) to repair leaks.

The ICRC stepped in to provide water to over 20,000 displaced people every day in M’poko, and helped SODECA carry out maintenance work in Bangui. The ICRC also played an active part in repairing the main pipeline that carries drinking water to over 100,000 people in the north of Bangui.

From 25 September to 10 November 2014, the ICRC, together with volunteers from the Central African Red Cross:

ICRC teams also visited over 600 detainees held in detention centres in Bangui, and helped 10 former detainees to go back to their families.