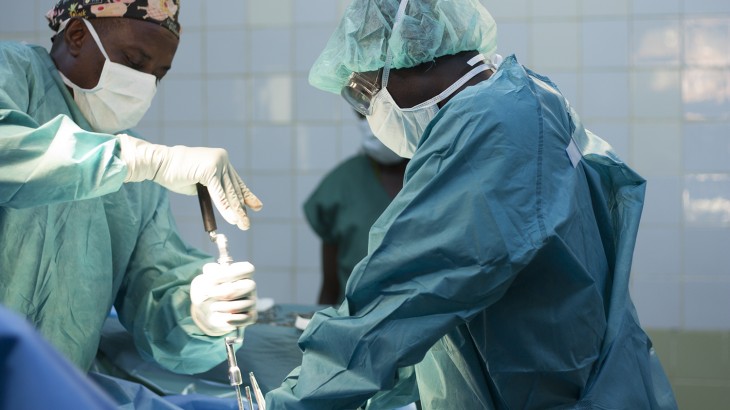 Bangui/Geneva (ICRC) – The trauma unit at a major hospital in the Central African Republic is filled to capacity after an outbreak of fighting in the capital, where ambulances transporting the wounded have often been delayed because of street battles and barricades.

The International Committee of the Red Cross (ICRC) and the Central African Red Cross (CRCA) are providing emergency services following the eruption of violence in Bangui’s PK5 district on 8 April.

“Our 34-bed trauma unit at Bangui’s Community Hospital is completely full,” said Marcelle Baltzinger, ICRC’s hospital project manager. “We have set up a close surveillance room and another casualty ward. They are full as well. We have two tents ready to be put up in case of need. They can accommodate at least another 20 patients.”

Bangui’s Community Hospital has received 52 people injured in the fighting so far. Ten surgical operations were carried out on Tuesday, including eight by an ICRC surgeon. At the same time, CRCA volunteers have been working in the hospital around-the-clock to carry patients on stretchers, run triage, and give support to ensure that people receive quick care.

Ambulances manned by volunteers who have been transporting the wounded from a CRCA-run clinic in PK5 were often stalled due to the street violence and barricades, delaying the arrival of patients in critical condition to Bangui’s Community Hospital.

“Every person who is wounded or in need of medical care during violence is entitled to safe and timely access to facilities where they can be treated,” said Diana Stoecklin, the acting head of the ICRC’s delegation in CAR. “In PK5, where only basic medical services are available, our ability to save lives depends on our ability to quickly move patients to more advanced facilities.”

Although the situation was calm overnight Wednesday to Thursday, the situation remains highly unpredictable. “We remind all parties involved in the fighting in the strongest terms not to target, damage or harm medical facilities, personnel, patients and transport used for medical purposes,” said Ms Stoecklin. “These are basic principles of humanity.”

As an independent, neutral and impartial humanitarian organization, the ICRC provides medical assistance based solely on need, regardless of the political, religious, or ethnic affiliation of the wounded. For more information, visit http://healthcareindanger.org/