Beijing (ICRC) – The first-ever workshop on international humanitarian law (IHL) and the protection of journalists was organized in Beijing on 19 April 2018, with over 20 participants from major Chinese media, both traditional and online. 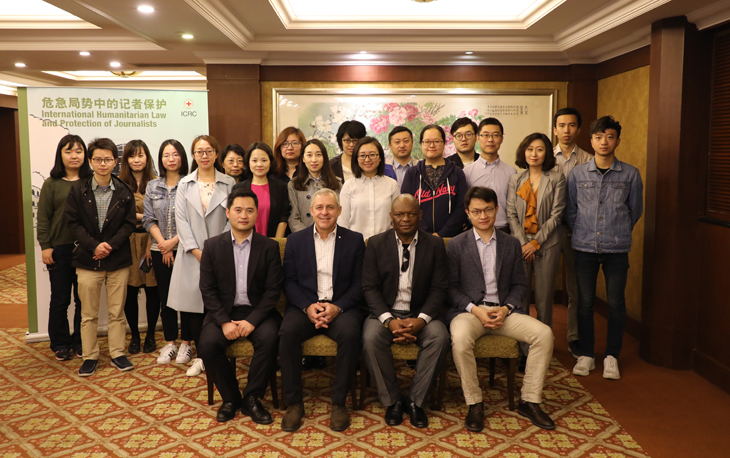 Participants take a group photo during a workshop on IHL and the protection of journalists organized by the ICRC East Asia delegation in Beijing, China on 19 April 2018. CC BY-NC-ND / ICRC/ Xiang Yongtao

Organized by the International Committee of the Red Cross (ICRC) with the support of the Red Cross Society of China, the workshop was designed to help participants understand the basics of IHL and how it protects journalists in situations of armed conflict. It also aimed at providing them with basic knowledge of the first-aid skills needed in times of emergency and even in their daily lives

"During the past few years, the Chinese media has shown great interest in reporting on armed conflict and some of them have been sent to report from countries at war. As professional reporters, while working hard to seek the truth, it's also important that they don't forget to protect themselves," said Valery Mbaoh Nana, the head of communication department at the ICRC regional delegation in Beijing.

"This workshop will help participants understand how IHL protects them in their capacity as journalists in situations of armed conflict," he added. 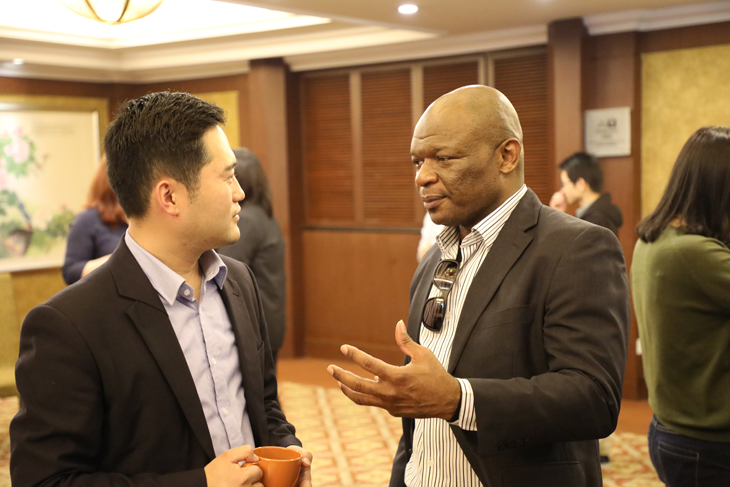 Valery Mbaoh Nana, the head of communication department at the ICRC regional delegation in Beijing shares his experience in war zones with a reporter from China Global Television Network during the media workshop in Beijing. CC BY-NC-ND / ICRC/ Xiang Yongtao

To get a sense of ground reality, three senior journalists from Xinhua News Agency (Xinhua), China Central Television (CCTV) and China Global Television Network (CGTN) who have reported from conflict zones were invited to share their experiences.

They spoke about reporting in war areas and collaborating with the ICRC in the field. A professional trainer from the Training Centre of the Red Cross Society of China also imparted a short training on first aid. 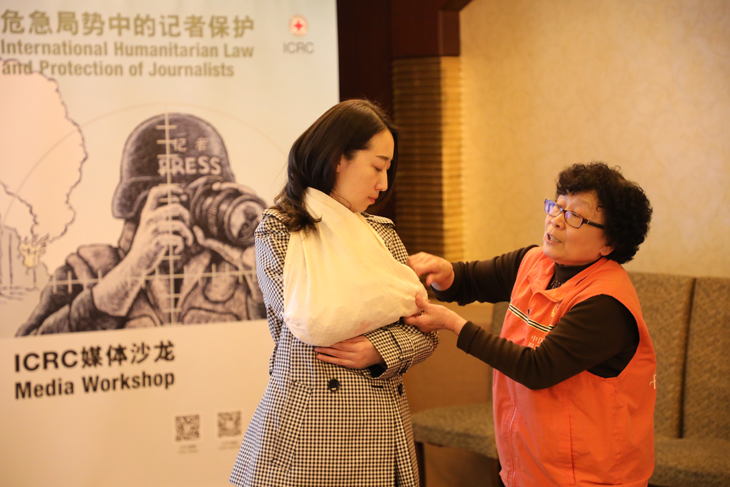 A professional trainer from the Training Centre of the Red Cross Society of China shows how to deal with wounds during a media workshop in Beijing. CC BY-NC-ND / ICRC/ Xiang Yongtao

Established in 1863, the ICRC is an independent and neutral organization operating in more than 80 countries around the world, mandated to help people affected by conflict and armed violence and promote the laws that protect victims of war. The ICRC's Beijing delegation opened in 2005 and it works to promote IHL, foster support for ICRC activities in the region and worldwide and support National Societies and provide orthopaedic and livelihood programmes in partnership with National Societies.