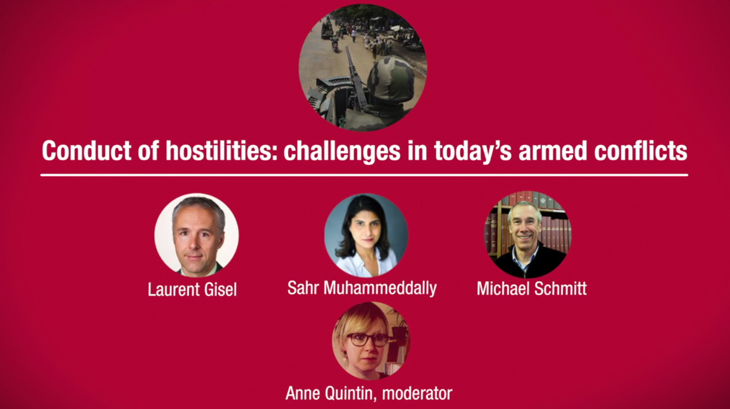 Introduction to "Conduct of hostilities: challenges in today's armed conflicts"

International humanitarian law governing the conduct of hostilities regulates and limits the methods and means of warfare used by parties to an armed conflict. It aims to protect civilians and civilian objects by striking an appropriate balance between legitimate military action and the humanitarian objective of reducing human suffering, particularly among civilians. This law only applies to "hostilities", meaning the collective resort by the parties to an armed conflict to means and/or methods of injuring the enemy. Indeed, there are situations where the use of force in armed conflicts is not subject to these rules but to the rules governing law-enforcement operations. Respect for the rules governing hostilities has to be assessed based on the information available to the commander at the time and not ex post facto. The relevant standard test to examine whether international law on the conduct of hostilities is respected is that of the "reasonable commander": an individual making reasonable use of all relevant information reasonably available at the time. The main principles governing the conduct of hostilities are the principles of distinction, proportionality and precautions in attack.

The principle of distinction requires that the parties to the conflict must at all times distinguish between the civilian population and combatants and between civilian objects and military objectives, and only direct their attacks at combatants and military objectives. Civilians are persons not belonging to armed forces. More specifically, for non-international armed conflicts, civilians are persons not belonging to State armed forces or to any organized armed group. Civilian objects are defined as any objects that cannot be considered as military objectives.

Under IHL, civilians are entitled to protection against attack "unless and for such time as they take a direct part in hostilities" (see, Interpretative Guidance on the Notion of Direct Participation of Hostilities under International Humanitarian Law).

The principle of proportionality prohibits attacks which may be expected to cause incidental loss of civilian life, injury to civilians, damage to civilian objects, or a combination thereof, which would be excessive in relation to the concrete and direct military advantage anticipated. When engaging in warfare, there can be a factor of uncertainty, which is addressed in treaty law: for example, Article 50(1) and 51(5)(b) of Additional Protocol I, which establish a presumption of civilian status in case of doubt as to whether a person is a civilian or whether an object normally dedicated to civilian purposes is used to make an effective contribution to military action. How to factor uncertainty into decisions related to the conduct of hostilities is an important challenge when applying the law in the middle of the fighting.

The principle of precautions in attack is enshrined in Articles 57 and 58 of Additional Protocol I. The "constant care" obligation contained in article 57 has to extend to all military operations, including military operations other than attacks (on the notion of "military operations" however, see the ICRC's Commentary on AP I, paragraph 2191 in fine). More specifically, when planning or deciding upon an attack, a commander has to take all feasible precautions: to verify that the target is a military objective; to choose the means and methods of warfare with a view to avoiding or at least minimizing incidental civilian harms; and to refrain from attacks where such harm to civilians and civilian objects would be excessive compared to the military advantage, etc. Finally, during the execution of the attack, the principle of precautions ultimately requires cancelling or suspending an attack when it becomes apparent that it would not comply with the principles of distinction or proportionality. Hence these principles and rules must be respected by commanders and soldiers at every phase of the attack. IHL also requires that the party that may be affected by enemy attack take precautionary measures. Thus, the parties to a conflict must take all feasible precautions to protect the civilian population and civilian objects under their control against the dangers resulting from military operations.

It is important to remain practical when teaching the rules of IHL governing the conduct of hostilities. Lecturers should master the law and understand how armed conflicts are fought and decisions made on the ground. Teaching through real-life examples, such as case studies, is key to fostering a better understanding of how the rules governing the conduct of hostilities are applied in practice. Nevertheless, lecturers should manage their students' expectations, recognizing that they will not receive the level of in-depth training a military commander will.

2. Videos: The entire session can then be watched at once, or by chapter, depending on the need and specific interest of each user.

3. Teaching tools: ICRC teaching tools on IHL, as well as specific, ready-to-use teaching materials on humanitarian principles, are available online free of charge. Lecturers are encouraged to use them to discuss contemporary humanitarian issues in their course or training module.

4. Further reading and resources: Lecturers and humanitarian professionals are encouraged to explore the topic further via additional resources (e.g. articles and blog posts) on IHL, humanitarian principles and related matters. Researchers may wish to use these materials as sources for their research projects in this area.

Laurent Gisel, ICRC
Laurent Gisel has been working for the ICRC since 1999. From 1999 to 2005, he carried out assignments in Israel and the occupied territories, Eritrea, Afghanistan and Nepal. From 2005, he served as diplomatic adviser to the ICRC president. Since 2008, he works in the ICRC's Legal Division. As legal adviser to Operations from 2008 to 2012, he covered Iraq and Afghanistan. He is currently senior legal adviser in the Thematic Legal Advisers' Unit. Prior to joining the ICRC, Laurent worked at the Public and Administrative Law Court of the Canton of Vaud. He holds a degree in law from the University of Geneva and a master's degree in international law from the Graduate Institute of International and Development Studies.

Sahr Muhammedally, Center for Civilians in Conflict
Sahr Muhammedally is a director at the Center for Civilians in Conflict. She manages research and policy advocacy for civilian protection and harm mitigation, and advises governments and weapon bearers on civilian protection during all phases of operations. She has worked for over 15 years in the fields of armed conflict, human rights and counterterrorism, and has conducted research in Afghanistan, China, Indonesia, Iraq, Malaysia, Pakistan, Syria and Yemen. Prior to joining the Center for Civilians in Conflict, she was a consultant with Human Rights Watch working on South and South-East Asia, and was a senior associate at Human Rights First. She practised law in New York with Gibbons PC and has been a consultant with the American Civil Liberties Union, Human Rights in China and the International Rescue Committee. She is a graduate of Mount Holyoke College (BA in Politics) and Brooklyn Law School (JD cum laude).

Teaching tools on conduct of hostilities