Creating and Teaching an IHL Course

This Advanced IHL Learning Series provides lecturers and trainers with recommendations on how best to teach international humanitarian law (IHL). Through peer-to-peer discussions among university professors, it addresses various aspects of IHL teaching: methodology and tools, teaching IHL in conjunction with human rights and/or international relations, teaching IHL in armed conflicts and teaching adults. Videos are complemented with teaching tools designed by the ICRC, as well as suggested readings. 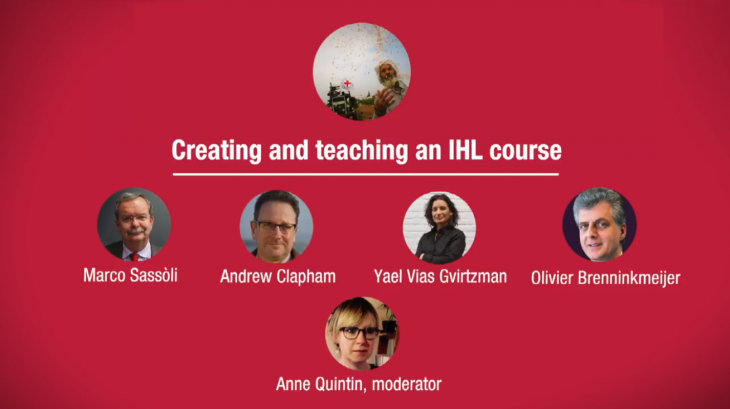 Introduction to creating and teaching an IHL course

Before knowing how to teach an IHL course, teachers must be convinced of the need to teach IHL. Likewise, students must understand why they should study it.

IHL is a good subject for training legal thinking. It also promotes justice in armed conflicts and provides a superb example of how public international law works. Teaching IHL also means equipping future professionals working in the field of armed conflict with the knowledge they will need to take the right decisions. When teaching IHL, it is essential to link theory and practice. However, which one should come first very much depends on the students’ cultural background. Memorizing rules and distinctions becomes easier when practical examples are given. Also, practice in international law involves not only its application, but also its creation.

Interactive methods, such as questions and answers on case studies, present many advantages. Students tend to dislike these methods, as they are looking for certainty and security while learning, neither of which is provided by an interactive approach. However, such an approach helps to develop critical thinking and encourages students to accept different opinions. In the end, what counts is not how much was said, but how much the students understood.

Difficulties can arise when integrating IHL into another course, such as one on human rights or international relations. Firstly, it would be wrong to present IHL and human rights as having the same historical background; they have different roots. However, they are still linked and there can be a need to explain why something can be lawful under IHL but unlawful under human rights law. Secondly, in an international relations course, it is important to realize that students do not have the same understanding of certain concepts (for example, proportionality). Adjusting one’s approach is thus essential to bridge the gap in these students’ understanding, instead of simply telling them whether they are right or wrong.

When IHL is being taught in the context of an armed conflict, this has repercussions on the teaching. It is important to make students think and to challenge their ideas and preconceptions. The aim is also to allow them to go beyond what they see and hear in the media. Students can say what they think and can argue about any issue as long as they say it respectfully and base it in law. Especially in a conflict zone, it is important to build a “safe space” in the classroom, where students affected by an armed conflict can express their ideas and opinions.

As far as possible, making the classroom a safe space means making the class fun and instructional at the same time. Even if IHL is taught as part of another class, such as public international law or human rights, its core principles and rules should be duly mentioned, and vice versa.

2. Videos: The entire session can then be watched at once, or by chapter, depending on the need and specific interest of each user.

3. Teaching tools: ICRC IHL teaching tools, as well as specific, ready-to-use teaching materials on IHL and humanitarian principles, are available online free of charge. Lecturers are encouraged to use them to discuss contemporary humanitarian issues in their course or training module.

4. Further reading and resources: Lecturers and humanitarian professionals are encouraged to further explore the topic via additional resources (e.g. articles and blog posts) on IHL, humanitarian principles and related matters. Researchers may wish to use these materials as sources for their research projects in this area.

Olivier Brenninkmejier, ICRC
Olivier Brenninkmejier worked for more than 30 years as a manager in both business and academia (in the last 10 years, he worked as chief administrative officer and associate dean of a business school). He joined the ICRC in January 2017 to help provide leadership training and development and to train facilitators.

Yael Vias Gvirsman, Radzyner Law School, Interdisciplinary Center, Herzliya
Yael Vias Gvirsman is the director of the first and only International Criminal and Humanitarian Law Clinic in Israel, based at the Radzyner Law School, Interdisciplinary Center, Herzliya. She teaches international human rights law, IHL and international constitutional law and works in those fields with international criminal courts and tribunals. She is completing her PhD on the International Criminal Court’s intervention in the armed conflict between Israel and Palestine at the Hebrew University of Jerusalem. Yael holds a master’s degree in law, specializing in international law and European Union business law, and a master’s degree in international relations. She has been a member of the Israeli Bar Association since 2006.

Marco Sassòli, University of Geneva/Geneva Academy of International Humanitarian Law and Human Rights
Marco Sassòli is a professor of international law at the University of Geneva. From 2001 to 2003, he was a professor of international law at the University of Quebec in Montreal, where he remains an associate professor. He is a commissioner and an alternate member of the Executive Committee of the International Commission of Jurists. Professor Sassòli graduated from the University of Basel as a doctor of laws and was admitted to the Swiss Bar. From 1985 to 1997, he worked for the ICRC, both at headquarters, inter alia as deputy head of the Legal Division, and in the field, inter alia as head of the ICRC delegations in Jordan and Syria and as protection coordinator for the former Yugoslavia. He also served as a registrar at the Swiss Supreme Court, and, from 2004 to 2013, as chairman of the board of Geneva Call, an NGO which seeks to persuade non-State armed actors to respect humanitarian rules.

Specific tools for creating and teaching an IHL course