Digital technologies: Exploring threats for people and humanitarians in warzones 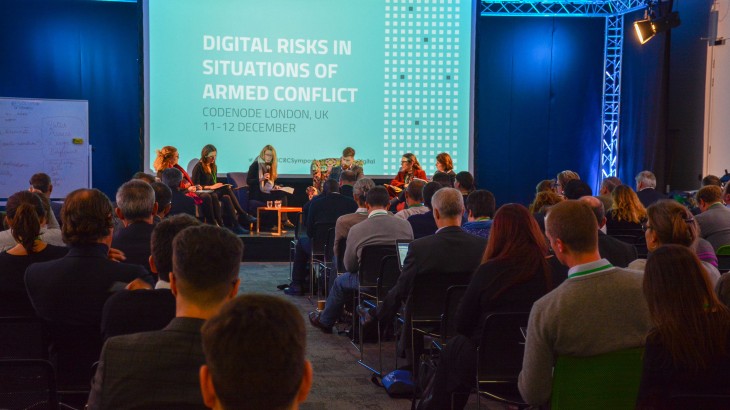 The risks posed by digital technologies in conflict zones were laid bare at an event in London last week.

While digital technologies have brought many benefits to the humanitarian sector, more attention and action are required when it comes to the associated threats and their consequences.

In a bid to explore the issues in more depth, the ICRC, working with experts from within the humanitarian sector and beyond, organised a two-day symposium focusing on the risks, how they manifest themselves in situations of armed conflict, and what can be done to address them in humanitarian practice.

Charlotte Lindsey-Curtet, the ICRC director of digital transformation and data, said: "We're in a climate where more technology is being used and more data is being aggregated and analysed.

"This poses a risk, particularly in highly-complex environments, for the security, safety and general privacy of individuals who are already vulnerable.

"It's important that we understand those risks and that we look at ways to mitigate the risks."

What are the risks?

The symposium saw experts from across the world discuss the myriad of potential threats posed by digital technologies for populations in conflict zones, the implications for humanitarian protection, and identify steps towards a coordinated response.

The three main scenarios discussed on the first day were:

To illustrate the first point, Ronald Deibert, professor of political science at the University of Toronto, highlighted the threat posed by targeted phishing attacks.

"It's quite common for bad actors to send phishing emails or text messages disguised in a way to trick people into clicking on a link, that will then activate some kind of malicious software, or spyware, that will take over the device," he said.

"Once somebody is in your device they can see everything you are doing – they can read all your emails and all your messages, turn on the camera, microphone, track your movements.

"Very powerful technology is available to espionage operators. And humanitarian organisations are a focus of those types of information operations now because of the data they collect."

Why is it important for the #humanitarian sector to talk about the digital threats facing people in conflict zones? @RonDeibert explains... #ICRCSymposium #WarGoesDigital pic.twitter.com/xU8MXfedVb

The dangers of 'fake news'

There has been increasing scrutiny of so-called 'fake news' in everyday life. The manipulation of information, whether intentional or otherwise, can also have a severe impact on people and humanitarians in conflict zones.

"The biggest implication that we're dealing with directly is the exacerbation of conflict," said Christopher Tuckwood, executive director at the Sentinel Project, a Canadian NGO that seeks to help communities threatened by mass atrocities.

"We started working several years ago in Kenya, in a region affected by inter-ethnic massacres. We found that rumours and misinformation were really significant in driving the fear, hatred and distrust between different tribes that enabled violence."

Tuckwood said this factor was also present in other parts of the world, including South Sudan and Myanmar.

He added: "Outside of dealing with the conflict dynamics, misinformation, disinformation and rumours can really cloud the situational awareness of humanitarians.

"So if people... are going to make decisions about how to accomplish something, or how to relate to people, you need to have a clear understanding of what's happening on the ground. And if the space is really clouded by misinformation it's hard to have a clear picture."

The need for evidence

Day two saw participants build on the discussions of the first day with a view to developing concrete actions that can be taken forward to mitigate against digital threats.

However, while the humanitarian sector has developed an increased awareness of digital risks in recent years, there is still a need for greater evidence to further the discussion, according to Nathaniel Raymond, a lecturer at the Yale Jackson Institute of Global affairs.

He said: "We need to move to an evidence base about these threats, where it's not rumours of things that go bump in the night, but actual scientific evidence, collected through what I call critical incident management.

"And right now when things go wrong in the field we have an incentive to not report that. We need to begin to learn from where things have gone wrong, to be able to be transparent about that, because if we don't know the harm, we can't do no harm."

Digital threats in conflict are a central part of 21st century humanitarian practice and will define what humanitarianism means, according to @nattyray11 #ICRCSymposium #WarGoesDigital pic.twitter.com/BA57So8SZf

In terms of building upon the symposium, Lindsey-Curtet emphasised the importance of continued engagement with stakeholders, both within the sector and beyond.

"We have to make sure we're maximising the potential of engagement to really minimise the risks that we're taking on behalf of those we're there to serve," she said.

"That means continuing the dialogue to look at ways we can build partnerships, move forward together, and try to get some speed behind this so we can really enhance the learnings that come from this type of event."