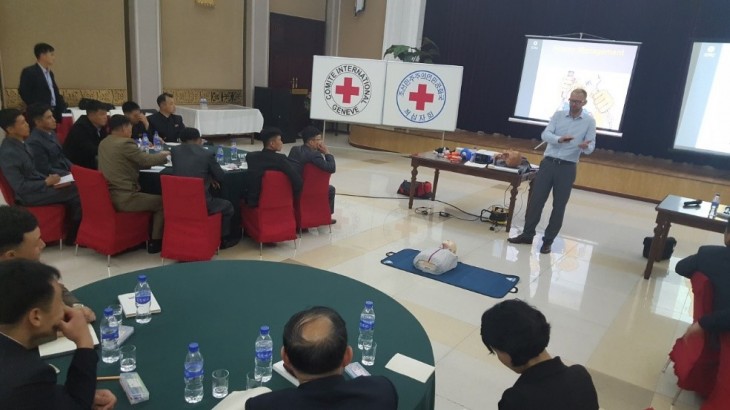 Staff from the Ministry of People Security (MoPS) of the Democratic People's Republic of Korea received training on blast trauma management from the International Committee of the Red Cross (ICRC).

40 people from the MoPS's bomb squad Explosive Ordnance Disposal (EOD) teams attended two Blast Trauma Courses (BTC) organized by the ICRC from 23 to 27 April in Pyongyang. Out of the participants, 15 were doctors and surgeons mostly from military hospitals.

This is the eighth BTC organized by ICRC in DPRK during which thirteen theoretical and four skill sessions were presented. A case simulation was carried out for the first time during the workshop, using a fictionalized scenario based on possible realistic case from Explosive Ordnance Disposal (EOD) incident.

"The major objectives are to raise awareness, understanding and implementation of relevant guidance on trauma effect by blast," said Bart Vermeiren, head of the ICRC mission in Pyongyang. "The course is also aimed at greater understanding of the effects of a blast on the human body, by strengthening the capacity of MoPS members to effectively deal with blast trauma effects and care."

"While removing old remnants of war and prevention of further civilian casualties remain primordially important, improved skills of the surgeons in dealing with blast trauma care might make the ultimate difference between life and death," Mr Vermeiren added.

During the course, participants were divided into groups for discussions on issues raised in the sessions. This practical scenario was highly appreciated by participants.

According to the authorities, remnants from the 1950-1953 war on the Korean peninsula have caused more than 16,000 victims from over 5,000 recorded accidents.