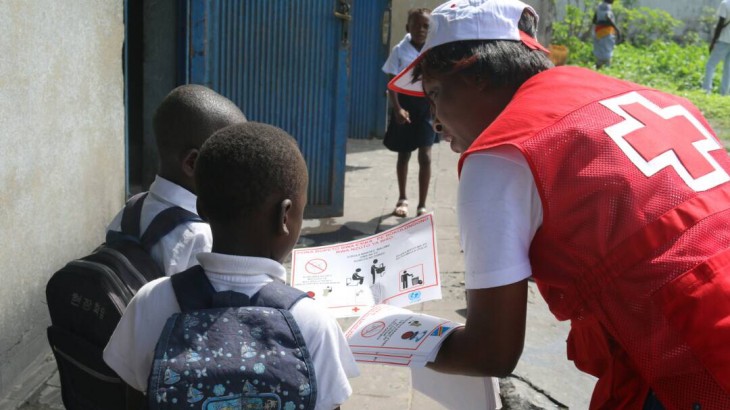 A Congolese Red-Cross volunteer explains to these children how to protect themselves against Ebola. CC BY-NC-ND / ICRC

Kinshasa/Geneva (ICRC/IFRC) – A team of Red Cross experts has arrived in the town of Beni, close to the epicentre of the Ebola outbreak in North Kivu in eastern Democratic Republic of the Congo (DR Congo).

The 19 person multidisciplinary team is made up of volunteers and staff from the Red Cross of the Democratic Republic of the Congo and staff from the International Committee of the Red Cross (ICRC) and the International Federation of Red Cross and Red Crescent Societies (IFRC). It includes a nine person safe and dignified burials unit, water and sanitation experts, and a community engagement specialist. Some of the members were deployed directly to Beni from the most recent Ebola response in Equateur Province.

Dr Fatoumata Nafo-Traore, the IFRC's regional director for Africa said: "The Ebola virus is most infectious in the moments after death. The safe handling of people suspected to have died from Ebola is crucial to halting its spread. However, for this approach to work, it needs to be attuned to local cultural beliefs and norms. This involves engaging with communities in a way that builds trust. This crucial process will be a focus of the Red Cross teams."

Local Red Cross volunteers are critical to curbing the spread of Ebola and will be supported by the specialist Red Cross team to carry out their work safely. This includes training and supervision for safe and dignified burials in Beni and Mangina as well as community outreach about Ebola in both health zones. The team will also improve water and sanitation systems in Beni prisons and help local hospitals and health facilities with infection prevention control measures as needed.

"We are deeply concerned that people in northern North Kivu have already been affected by years of armed conflict and an Ebola outbreak could be devastating to already vulnerable communities," said Nicolas Lambert, the ICRC's Deputy Head of Delegation in DR Congo and its Ebola response team leader.

North Kivu has been affected by armed conflict for two decades. In the past two years, humanitarian organisations have not be able to safely access some parts of the province. The ICRC has worked in Beni since 2008 and has supported internally displaced people in Mangina since 2015. Mangina hosts thousands of people who fled clashes in North Kivu and Ituri provinces, many of whom live with and rely on residents.

This outbreak is the second to strike DR Congo in recent months and comes just one week after the Ministry of Health declared the end of a separate Ebola outbreak in Equateur Province.