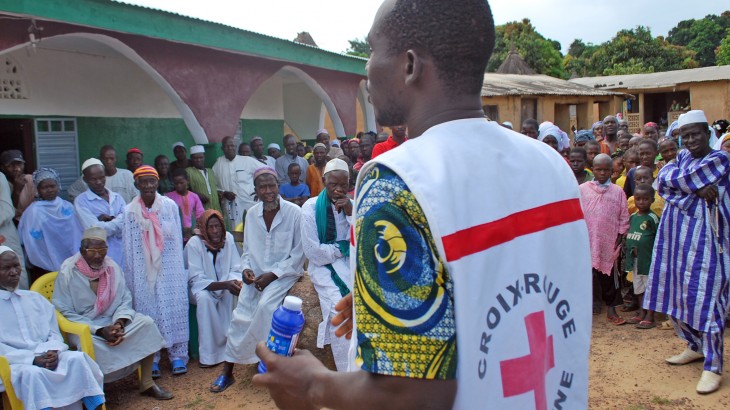 The Ebola epidemic in West Africa, which has affected thousands of people and left deep scars on whole communities and countries, was confirmed one year ago. The International Red Cross and Red Crescent Movement says complacency and silence are now the greatest enemies in defeating the disease, and today it is launching an international awareness-raising campaign centred on using "the right words" to help end the disease.

The goals of the campaign – Words Against Ebola – are to promote knowledge and awareness, alleviate fear, overcome complacency, and create a community of global support to bring Ebola cases down to zero.

Medical hardware alone is no longer enough. Practices need to change, and words are the best tool for this. It will take time, however, and unwavering commitment.

Senior officials of the Geneva-based International Committee of the Red Cross (ICRC) and the International Federation of Red Cross and Red Crescent Societies are together calling for continued momentum in the fight against Ebola, to ensure that the people of West Africa are not let down.

"We are at a crossroads," says ICRC Director-General Yves Daccord. "One path before us is that of sustained international solidarity and still more heroism by local volunteers and health workers. That way lie zero cases, stronger health systems, and recovery from the wounds Ebola has inflicted on communities."

"But if we go down the path of complacency, or fatigue, we may find ourselves dealing with a silent disaster, making access to communities far more difficult and threatening not just recovery, but even the progress we have already made," he warns.

Together we can stop Ebola

The Words Against Ebola campaign is being launched at parallel media events in Europe and West Africa.

"Let us use the power of words to rectify misconceptions, promote dialogue, heal, reconcile and engage to overcome resistance, facilitate behavioural change, and ultimately get us to zero new cases," says Elhadj As Sy, IFRC Secretary General.

One of the most important factors in driving down cases over the past year has been a reduction in unsafe burial practices, whereby the still-contagious bodies of the deceased are handled by bereaved relatives. In some places, however, unsafe practices continue.

The three countries most affected by Ebola – Guinea, Liberia and Sierra Leone – are still reporting a refusal by communities to cooperate with public-health measures, and even assaults on responders.

Mr Sy says, "Our words and our actions will make a difference. They will pave the last mile back to trust and resilience. Words to break the stigma against health-care workers and survivors, words to educate communities on prevention, words of solidarity from all over the world to say to affected people and communities: We won't let you down, and together we can end Ebola."