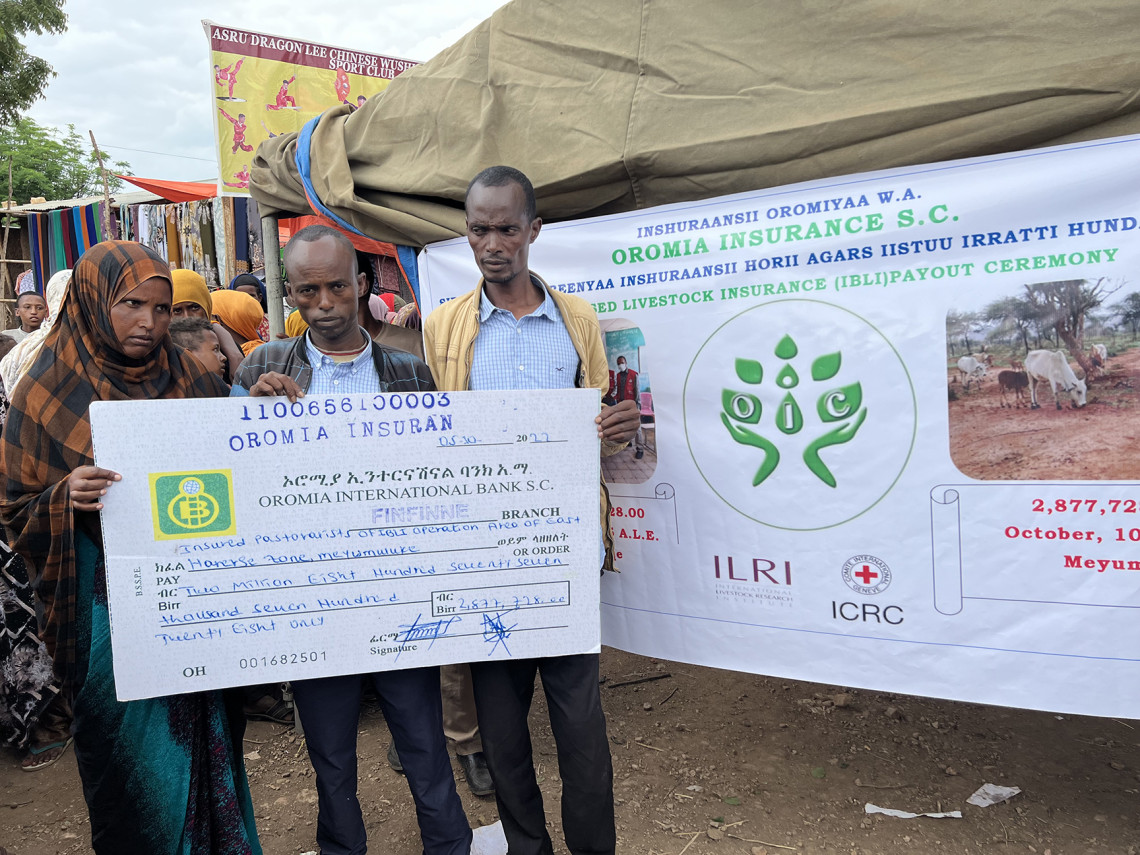 The International Committee of the Red Cross has introduced a livestock insurance program in support of long-term resiliency efforts that help communities recover from the devastating impact of drought and be better prepared to cope with it in future.
Article 31 October 2022 Ethiopia

On a hot day in a small pastoral town in Ethiopia's Oromia region, Bedel Abdullahi walks around his hut. He inspects the surrounding area, which until recently looked like nothing but desert and is now greening up with fresh herbaceous vegetation following sparse rains. For the 65-year-old cattle herder, pasture represents life for the livestock – and his family. Three years ago, his cows, camels, goats and sheep survived on it, but they were nearly wiped out by drought within months.

These livestock are a source of income and food through sales, meat and milk. The current drought in eastern Oromia and the Somali region means a loss of livelihood and poverty for Abdullahi's household.

"I lost almost everything. I only have 12 cows and nine camels left," says Abdullahi, who remains stunned at how 48 of his cows and seven camels died in months. 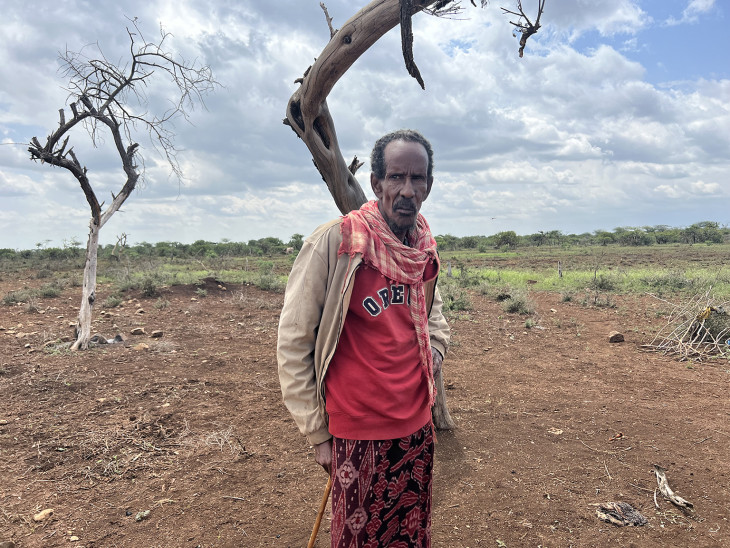 Abdullahi at his home in Roggee, Oromia region in Ethiopia

Sadly, the drought persisted, and he was forced to sell some of his remaining goats and sheep that survived it to buy food and provide the basic needs of his two wives, 25 children and 29 grandchildren. His family has largely depended on humanitarian assistance from government and the International Committee of the Red Cross (ICRC).

I do everything I can to provide for my family. But the prolonged dryness has taken all from me,

Abdullahi's family received animal feed from the ICRC twice to sustain the remaining livestock. This has helped them through these tough times.

"Some of the sheep and goats could survive the drought. That is my main source of income now. I sell some to buy food for family," explains Abdullahi.

Communities east of the Oromia region and in Somali region are facing desperate choices to survive as conflicts and ethnic violence, Al-Shabaab incursions, drought and economic hardship leave them extremely vulnerable.

Abdullahi fled his home in Somali region five years ago when gunmen attacked his village, and his family was a target of an ethnic clash. He found safety for his large family in Roggee, Oromia, and settled not long before climate change dried up everything and killed his livestock.

The ICRC is piloting a livestock insurance program in Meyumuluke since 2020, to help communities affected by the devastating drought build resilience and withstand its shocks. The initiative, known as Index-based Livestock Insurance (IBLI), is designed to protect pastoralists against drought-related livestock losses in semi-arid pastoral lowlands in the Oromia and Somali regions.

"The goal is to keep their animals alive during the drought season. Drought is the main cause of livestock deaths in these communities and pastoralists are unable to manage and cope with it," says Charu Chandra, Deputy Economic Security Coordinator for resilience programs at the ICRC Delegation in Ethiopia. "Our insurance program offers a resilience opportunity for them to protect their animals against drought."

Apart from the prolonged drought, insecurity has also limited traditional practices of extensive grazing and seasonal migration routes often used by herders to search for pasture. The insurance policy measures available pasture or forage recorded per area via regular satellite images, and tracks any anomalies based on historic data on availability of pasture in the area. Persons registered on the insurance policy then receive payouts when forecasts show severe seasonal forage scarcity – and the money is used to buy feed, water, veterinary medicines and other inputs or services needed to sustain their insured animals over a season in a year of severe drought.

The ICRC has partnered with the International Livestock Research Institute (ILRI) and Oromia Insurance Company (OIC) to implement the pilot phase of this program – with ILRI responsible for technical backstopping while OIC promotes and sells the insurance product.

"The ICRC provides financial and logistic support to the partners in addition to the subsidy given to the livestock keepers to purchase the insurance product," says Charu.

On 13 October 2022, some 771 pastoralists received 2.87 million Ethiopian Birr ($54,000) through the ICRC livestock insurance program in Meyumuluke. The amount covers insurance for 2,971 animals insured under the policy six months ago. The payouts are calculated automatically, and individuals do not have to file claims when the rains fail. 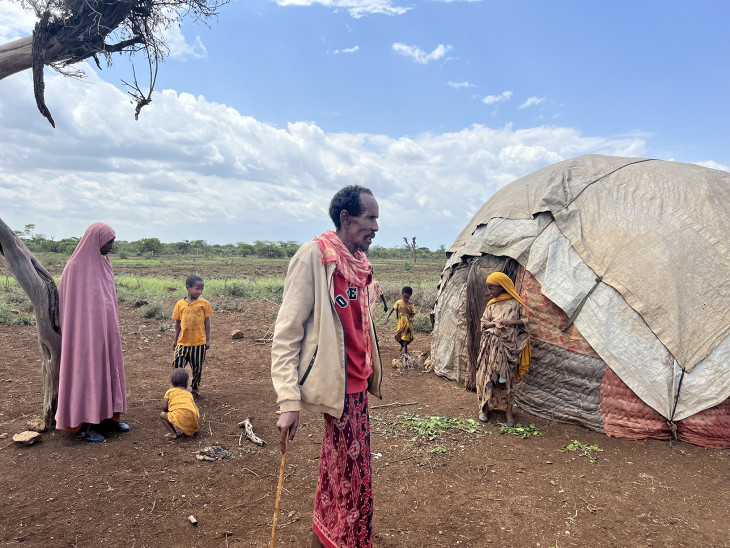 Abdullahi at his home with his family in Roggee, Oromia region in Ethiopia

"I would like to insure all my cows and camels that are still alive, but I do not have enough cash."

Since 2018, the ICRC has been implementing livestock outreach programs in pastoral communities affected by conflict and drought in the Oromia and Somali regions. These programs drive sustainable livestock farming by helping to protect and restore animal health. 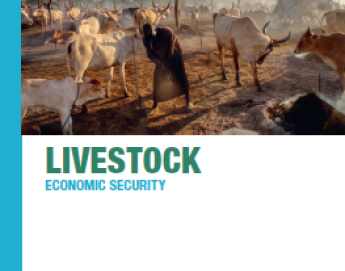