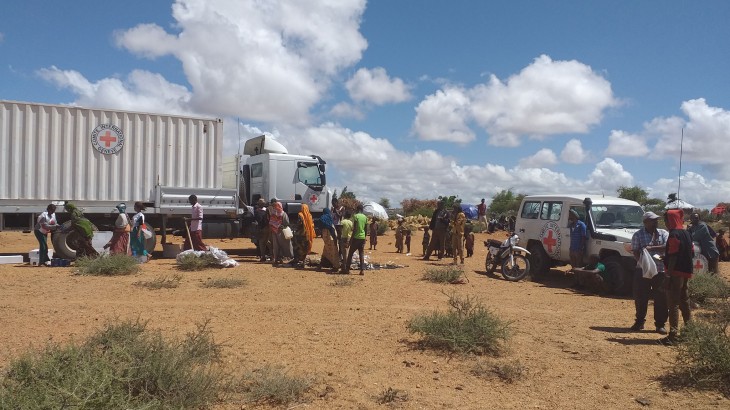 "We fled with nothing but with our lives. Everything we had was destroyed before our eyes," says Abdulkadir Mohammed, 48, who is among hundred thousands of people displaced as a result of ethnic conflict that occurred in 2017 along Oromia-Somali border areas in Eastern Ethiopia.

Abdulkadir, head of an eight-member family, explained, "Our life seemed gloomy following the conflict but thanks to the assistance provided by the Red Cross, we now have hope."

Between 13 and 17 May 2019, more than 28,000 people (both Oromos and Somalis) in Babile and Chinaksen districts of East Hararghe Zone, Oromia Region, and in Tuliguled district of Fafan Zone, Somali Region received vegetable seeds and farming tools jointly distributed by the ICRC and Ethiopian Red Cross Society (ERCS).

"The distribution is aimed at restoring the livelihoods of the affected communities," remarked Tsegahun Tesfaye, an agronomist working with the ICRC. Each household received three types of vegetable seeds (onion, tomato, cabbage) as well as two farming tools.

Moreover, in each district, farmers training centers were equipped with necessary materials, while agriculture extension workers will be trained to support farmers throughout the farming season, according to Tsegahun. The ICRC has also started the rehabilitation of irrigation infrastructures, damaged by the conflict where the displaced people live.

Fatuma Muktar, a 38 year old woman, is another recipient of the assistance. "We are happy with the assistance. I hope the seeds I got will help me harvest 30 and 20 baskets of onion and tomato respectively," she indicated.

Ethnic Oromos and Somalis, mainly agro-pastoralist communities living in areas along the border between the two regions, have often been involved in violence linked to land suitable for grazing and cultivation as well as access to water. The ethnic violence that occurred along Oromo-Somali region left 700,000 people displaced, according to official figure.

The ICRC, in partnership with the ERCS, provides assistance mainly to people affected by conflict; also it engages in dialogue with relevant authorities to sensitize them as to the needs of displaced people and about efforts to protect health centers and allow circulation of ambulances transporting the sick and wounded.