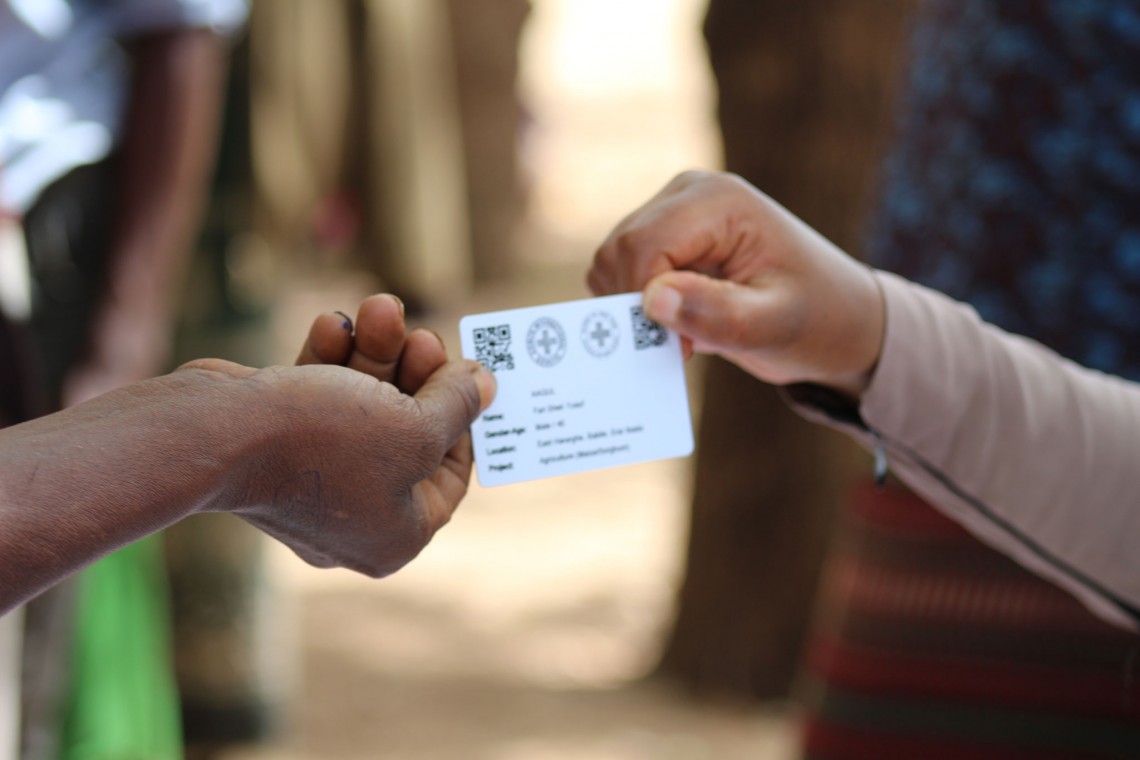 It only takes a few minutes for a small school in Babile, Oromia region in Ethiopia to turn into a hive of activity. A truck carrying 12 tonnes of maize and sorghum seeds makes it way up to a rocky road after a 550 kilometre trip from the capital, Addis Ababa. The rainy season is about to begin, and the neighbouring farmlands are ready for planting.
Article 07 April 2020 Ethiopia

Umar Ibrahim, a 65-year-old grandfather, is among the 420 families of the area that are queuing to receive the new identification cards. Thanks to an individual QR code, the cards will identify them as recipients of cash and seeds as part of a programme aimed at improving livelihoods of people affected by interethnic violence. It is the first time this card is being used by the ICRC in Ethiopia to identify recipients and record their real-time rations. This is an efficiency boost from the previous paper coupons which did not contain personal data.

The compound quickly becomes a collage of colours as many brightly dressed women converge. Groups of excited kids ran around while playing with makeshift balls as their parents attempt to bring them to order.

Meanwhile, Charu Chandra, an agronomist with the ICRC claps his hands loudly and calls people to attention. His ICRC colleague, Ameyu, and counterparts from the Ethiopian Red Cross, join him to explain to the residents how the new card works. 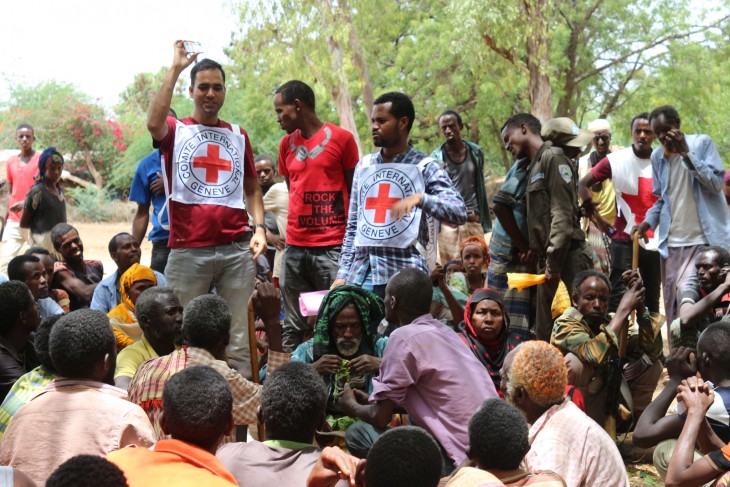 Charu Chandra explains the use of the community identification card. Photo: ICRC

"You will use it to identify yourself to receive the seeds," Charu tells the crowd. "In the future, you will also use it to receive money at the bank, so please don't lose it."

After about ten minutes of explaining, Charu leads them in a queue to a small desk where the cards are ready to be handed out in alphabetical order.

Around 70 residents receive their cards before Umar. The queue moves almost as fast as it formed, and it is soon Umar's turn to receive his. He examines it as he walks to another queue next to the 80-foot truck where Red Cross volunteers are tirelessly handing over the seeds in two separate sacks arranged on the ground. When it's Umar's turn, three teenagers quickly step in and assist him to carry the sacks away. His hunched-over walk is easy to spot as he is among the eldest in the compound. 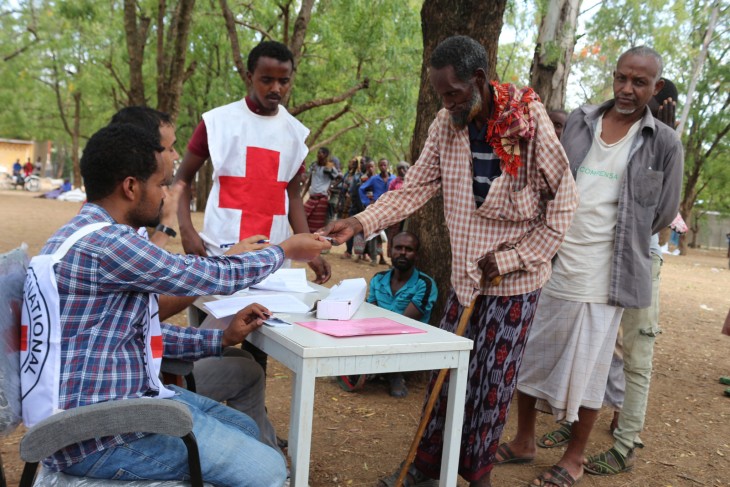 Umar Ibrahim receives his identification card before proceeding to collect his ration of seeds during the distribution. Photo: ICRC

A day later in Tuliguled, in the Somali Region, an earthly scent engulfs the air as drops of rain begin to fall on the dry soil.

"The rainy season is beginning," says Abdi Suge, an area resident with a big family of two wives and eight children.

Like in Babile, residents of Tuliguled gather to receive their cards and seeds. Abdi has 36 hectares of land. He will use the yield observing a 'thirds rule' – a third for domestic consumption, a third to sell, and a third to store. He, like so many in this area, is still reeling from clashes and drought that hit the area around the same time in 2018.

"The weather these days is unpredictable. It is important to save some yield for the uncertain future," Abdi says. "I will plant immediately."

The ICRC in Ethiopia has partnered with Red Rose, a web-based platform, to provide digitalized management of some of our humanitarian interventions. The card has personal identification information, as well as what humanitarian assistance one is entitled to. It will also be used for cash-based interventions through a partnership with a local bank, all the while adhering to high standards of data protection. During the rollout, the ICRC distributed seeds that will benefit 43,000 individuals in Oromia and Somali regions in the current planting season.