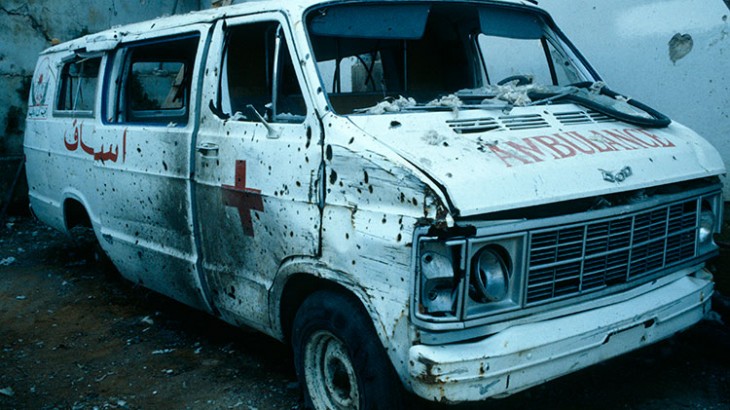 On the occasion of International Human Rights Day – we, the undersigned organizations, speak out in support of the Health Care in Danger initiative. We forcefully renew our call for wounded and sick people's right to health care during armed conflict to be respected and protected, and for attacks on health personnel and facilities to stop.

Specifically, we call for action by the States party to the Geneva Conventions, whose rules seek to limit the way wars are fought and to protect people wounded in conflict. One year ago today those States gathered in Geneva for the 32nd International Conference of the Red Cross and Red Crescent. By adopting Resolution 4, "Health Care in Danger: Continuing to protect the delivery of health care together", they reiterated their strong commitment to protecting the wounded and sick, health-care personnel and facilities, and medical transports.

We also appeal to the member States of the United Nations Security Council, who have echoed the commitment expressed in Resolution 4, and who, in May 2016, adopted Resolution 2286 on the protection of health care in armed conflict.

Despite these commitments, attacks on health-care services continue relentlessly.

In Syria: so far in 2016, the World Health Organization has recorded over 120 attacks on health facilities. This is in addition to the 135 attacks recorded in 2015 and 93 in 2014. In spite of the current escalation of fighting and people's desperate circumstances, only one of eastern Aleppo's nine hospitals remains fully functional, and four are completely out of service. Medical staff are exhausted and stocks severely depleted. Western Aleppo has not been spared the indiscriminate violence either, and hospitals there are struggling to cope with the ongoing influx of patients.

In Yemen: since the current conflict began in 2015, over 160 attacks on hospitals, clinics and medical personnel have been reported to the International Committee of the Red Cross (ICRC). Less than half of the country's health-care facilities are still operational. On average, 20 people – men, women and children – die every day, many from treatable wounds and curable illnesses, because the right drugs are not available and the hospitals are not functioning.

In Iraq: this past year, hospitals and other health facilities have been damaged, destroyed and looted, preventing civilians from getting medical services in the provinces severely affected by the conflict. In some areas, more than 45% of health professionals have fled since 2014. Medical vehicles have been obstructed on their way to health facilities, and in some cases misused by attackers. Symbols of medical protection and assistance have been desecrated.

Afghanistan, Libya, South Sudan – the list goes on. Attacks against patients and health-care workers treating the wounded and sick during armed conflict are one of the most appalling acts challenging our common humanity. As a result of this violence, countless people are killed or maimed; pregnant women in labour cannot get to hospital in time because ambulances are targeted on their way to collect them; elderly people suffering from chronic diseases cannot receive treatment; children cannot be vaccinated. Premature babies have to be removed from incubators after air strikes on the hospital, doctors are forced to watch their patients die because they have run out of medicines to treat them. Patients and their families, health-care workers and entire communities are paying a terrible price. This must end. Wars have rules.

States must act on their commitments now and stop this violence.

We urge those involved in ongoing conflicts to safeguard hospitals and other civilian infrastructure and protect them from the hostilities. Governments with influence over the warring parties should pressure them to fulfil their obligations under international humanitarian law.

Parties to conflict must respect the sanctity of medical facilities and the ethical obligation of health personnel to treat all patients, irrespective of who they are. They must allow medical supplies to reach their destination and people in need of care to reach medical facilities.

They should carry out full, prompt, impartial and independent investigations into any incidents preventing the safe delivery of health care.

They should urge their military forces to incorporate precautionary measures to protect wounded and sick people and health-care personnel, facilities and vehicles when planning and carrying out military operations.

They should promote awareness of, and compliance with, international humanitarian law and international human rights law. In collaboration with the relevant institutions, they should disseminate the Ethical Principles of Health Care in Times of Armed Conflict and Other Emergencies among the general public and the armed forces.

There are limits to how wars are fought. Everyone, whether wounded or sick, has the right to health care. Even in conflict.