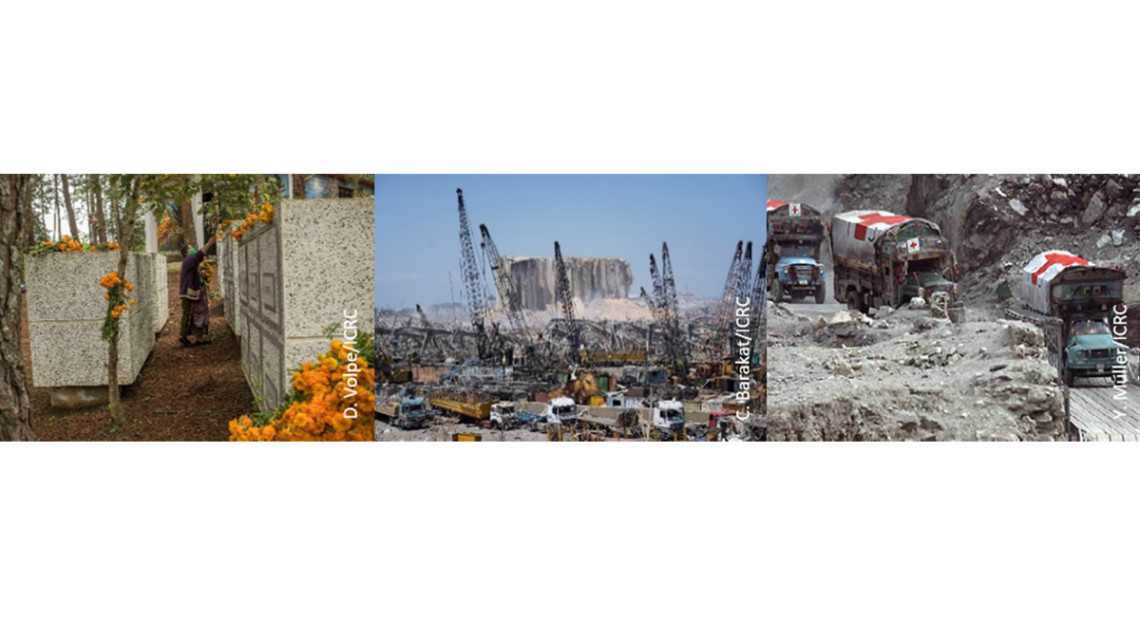 The fifth Universal Meeting of National Committees and Similar Entities on International Humanitarian Law (IHL), hosted by the ICRC, took place online between 29 November and 2 December 2021, under the banner "Bringing IHL home through domestic law and policy". 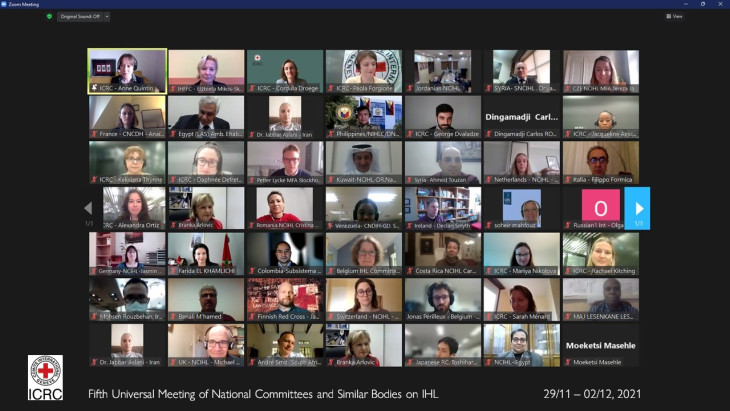 1. Kelisiana, can you tell us what these universal meetings are all about?

KT: Since 1995, the ICRC has been tasked with organizing a regular universal meeting that gathers together national IHL committees and similar entities, as well as states interested in setting up such an entity.

I had the honour of attending the last universal meeting, held in 2016, and while we didn't have the same sense of engagement with each other at this year's meeting, because of the online format, it was nevertheless a valuable opportunity to exchange views and share good practices on the domestic implementation of IHL.

2. Anne, can you explain the functions of a national IHL committee?

AQ: Under the Geneva Conventions of 1949, states have the primary responsibility for respecting and ensuring respect for international humanitarian law. They are encouraged to set up inter-ministerial bodies, commonly known as national IHL committees, to assist them in this task. The main functions and roles of such committees are detailed in our Guidelines for Success.

3. Kelisiana, can you tell us who attended the fifth Universal Meeting?

In addition, the meeting was observed by governments that are interested in establishing such an entity, and by international and regional organizations involved in the domestic implementation of IHL.

In that sense, the universal meetings are one of the rare occasions on which the true universality of IHL can be demonstrated, when representatives from various bodies and departments across the globe can come together to discuss IHL implementation.

To facilitate their interaction, simultaneous interpreting was provided in Arabic, English, French, Spanish and Russian.

4. Anne, why was this universal meeting entitled "Bringing IHL home through domestic law and policy"?

AQ: This title refers to Resolution 1, "Bringing IHL home: A road map for better national implementation of international humanitarian law", adopted during the 33rd International Conference of the Red Cross and Red Crescent (2019).

As the fifth Universal Meeting took place midway between the 33rd (2019) and 34th (2023) International Conferences, it offered a good opportunity to reflect on what national IHL committees have already achieved in relation to Resolution 1, and to identify what more needs to be done in the run-up to the next International Conference.

5. Speaking of Resolution 1, Anne, can you tell us what progress national IHL committees have already made in this regard?

AQ: Resolution 1 encourages the establishment of national IHL committees or similar entities, the ratification of or accession to IHL treaties, the adoption of necessary legislative, administrative and practical measures, and other related actions.

During the first session, we congratulated the 13 national IHL committees that have been established or revived since our last universal meeting, in 2016, and some of these new entities subsequently took to the floor to share their experiences.

Between January 2017 and mid-November 2021, there have been 209 treaty ratifications across the globe, and we heard from entities about the steps they have taken to encourage the adoption and implementation of these treaties.

Furthermore, between January 2017 and December 2020, at least 85 domestic statutes were adopted that implement IHL and other instruments, and we heard from national IHL committees about their role in supporting related measures at the domestic level.

6. Anne, the second session was devoted to the missing. What can national IHL committees do to enhance protections for missing persons and their families during and after armed conflict?

AQ: During the second session on the missing, we emphasized the utility of compatibility studies in identifying changes that should be made to domestic frameworks to ensure compliance with IHL. We also emphasized the important role of national IHL committees in encouraging states to implement findings from these studies.

We concluded that these entities can push for the adoption of domestic laws, policies and structures to account for protected persons, prevent people from going missing and inform families in situations of armed conflict. One structure that could be established in each state, for instance, is a National Information Bureau.

7. Kelisiana, you chaired the third session on weapons. What can national IHL committees do to ensure the application of IHL to weapons, new technologies and arms transfers?

KT: During the session on weapons, great emphasis was placed on the role that national IHL committees can play in providing expert advice to governments on arms transfers or new, cutting-edge technologies. There is broad consensus that many weapons cause indiscriminate, superfluous or unnecessary suffering, and much more needs to be done to address this.

We did, however, hear excellent examples of engagement with parliament and work on arrangements for the drafting of legislation that have helped ensure that international obligations can be applied in the states concerned.

8. Kelisiana, in the fourth session, we learned that some states have adopted counter-terrorism laws, which can sometimes interfere with the delivery of humanitarian assistance. Can national IHL committees help ensure that counter-terrorism frameworks are consistent and coherent with IHL?

KT: Indeed! The final session clearly demonstrated that it is possible to have coherent and comprehensive counter-terrorism frameworks that meet national security objectives while also being consistent with IHL and the principles of humanitarian action.

We concluded that it is possible to respond to the terrorist threat while ensuring that humanitarian relief and protection continue to reach those in need. National IHL committees and similar entities and government officials shared how they have included humanitarian exemption clauses in their counter-terrorism legislation, thus providing useful examples to others who wish to facilitate humanitarian action.

9. Anne, what's next in terms of follow-up with national IHL committees on these agendas?

AQ: The ICRC's Advisory Service is in the process of following up with national IHL committees and states on their statements and commitments made during the fifth Universal Meeting.

There will be further opportunities for follow-up during the regional meetings of national IHL committees that are scheduled for 2022, subject to the evolution of the pandemic. These regional meetings are due to take place in the following regions: Near and Middle East (NAME), Western Europe, and Eastern Europe/Central Asia.

These regional meetings are important in allowing national committees to continue to work towards practical achievements and to collaborate with other entities in their region.

Looking further ahead, the 34th International Conference of the Red Cross and Red Crescent is scheduled to take place in 2023, while our next universal meeting is planned for 2025.

In the meantime, national IHL committees can remain in contact with each another via our online JIVE community.

10. Finally, Anne, where can more information about the meeting be found?

AQ: The opening and closing speeches of the fifth Universal Meeting, delivered, respectively, by Dr Helen Durham, the ICRC's director of international law and policy, and Dr Cordula Droege, the ICRC's chief legal officer and head of law, are available to read here.

A final report of the meeting is also due to be published in early 2022.

The Opening Speech by Dr Helen Durham, Director of International Law and Policy at the ICRC

The Closing Speech by Dr Cordula Droege, the ICRC's chief legal officer and head of law 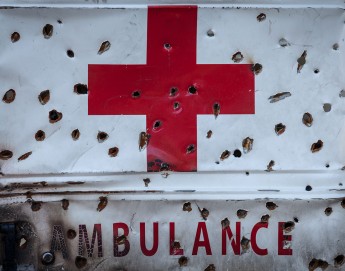 Universal meeting of National Committees and similar bodies on international humanitarian law. Statement by the ICRC 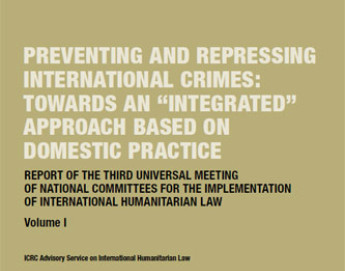 Preventing and Repressing International Crimes: Towards an "Integrated" Approach Based in Domestic Practice – Report of the Third Universal Meeting of National Committees for the Implementation of International Humanitarian Law