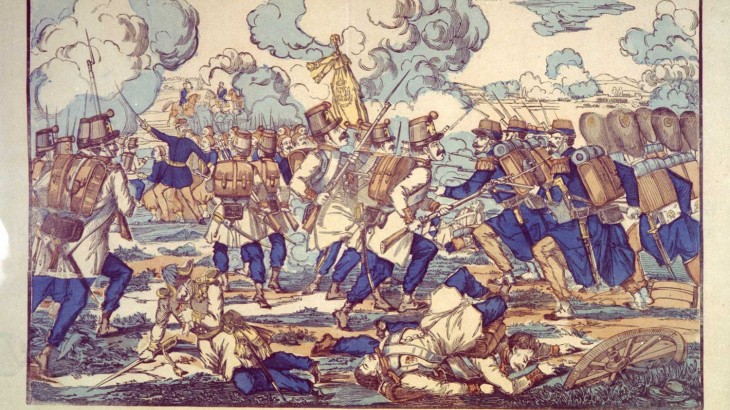 The Red Cross came into being at the initiative of a man named Henry Dunant, who helped wounded soldiers at the battle of Solferino in 1859 and then lobbied political leaders to take more action to protect war victims. His two main ideas were for a treaty that would oblige armies to care of all wounded soldiers and for the creation of national societies that would help the military medical services.

Dunant put down his ideas in a campaigning book, A Souvenir of Solferino, published in 1862. The Public Welfare Committee in his home town of Geneva took them up and formed a working group (the embryo ICRC, with Dunant as secretary), which first met in February 1863. The following October, an international conference was convened, to formalize the concept of national societies.

The conference also agreed on a standard emblem to identify medical personnel on the battlefield: a red cross on a white background. (The red crescent emblem was adopted by the (Turkish) Ottoman Empire in the 1870s.)

In August 1864, delegates from a dozen countries adopted the first Geneva Convention, which put a legal framework around these decisions and made it compulsory for armies to care for all wounded soldiers, whatever side they were on.

These developments put the ICRC at the origin of both the International Red Cross and Red Crescent Movement – today grouping the ICRC, the national societies (185 in 2007) and their International Federation – and of modern international humanitarian law: the four Geneva Conventions of 1949 and their three Additional Protocols of 1977 and 2006.

At the outset, the ICRC's task was to encourage the creation of national societies (the first was in the German state of Württemberg, in November 1863) and to act as a channel for communication between them. Its first field operation was in 1864, during the war between Germany and Denmark: delegates were sent to work on each side of the front line. This heralded the start of the ICRC's operational role as a neutral intermediary between belligerents.

Dunant's ideas found a positive response among leaders and benefactors, welfare groups and the public. In the following years, national societies were established throughout Europe. The Geneva Convention was later adapted to include wounded, sick and shipwrecked in warfare at sea, and governments adopted other laws (such as the Hague Conventions) to protect war victims.

At the same time, the ICRC expanded its own work, undertaking new activities such as visiting prisoners of war and transmitting lists of names, so that their families could be reassured.

By the end of the 19th century, Henry Dunant – whose vision had helped start the whole process – was living in obscurity in a Swiss mountain village; his business failures had forced him to withdraw from Geneva and from an active role in the Red Cross. But in 1901 he became the first recipient, along with the French pacifist, Frédéric Passy, of the Nobel peace prize.

Dunant died in 1910. By then, in Europe, North and South America, Asia and Africa, the Red Cross and the Geneva Conventions had taken root. Both were to be put to a severe test during the First World War.