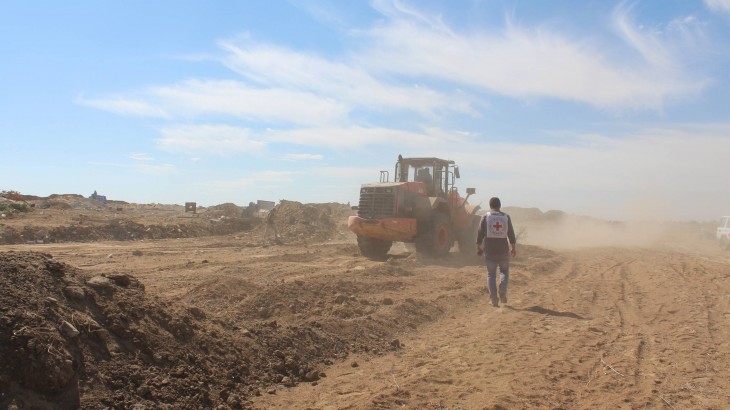 In the border area between Gaza and Israel, 12 bulldozers levelled 750 hectares of farmland that had been churned up during the 2014 conflict and reopened agricultural roads that had been damaged. The project has allowed Palestinian farmers to sow their seeds in time for the winter rainy season. © ICRC/Rama Humeid

Six months after the end of the conflict between Israel and Gaza, tens of thousands of people continue to suffer, with little or no help to rebuild their lives. Without viable shelter and essential infrastructure, heavy winter storms at the end of 2014 and beginning of 2015 have further exacerbated the humanitarian situation in the Gaza Strip. Progress on reconstruction has been agonizingly slow, while the economic slowdown and damage to homes and water and sanitation systems all combine to make the daily lives of Gazans extremely tough.

"Reconstruction of the Strip is grindingly slow," said Mamadou Sow, head of the International Committee of the Red Cross (ICRC) in Gaza. "This isn't helped by restrictions on the import of building materials. Relief is being provided by the ICRC and Palestine Red Crescent but it's not enough, and thousands are still struggling to cope. The impact of the conflict is still being acutely felt by civilians. It will take decades to rebuild Gaza but right now our priority is to meet the urgent humanitarian needs."

Immediately after the heavy fighting stopped, the ICRC and the Palestine Red Crescent Society (PRCS) expanded their relief work to provide shelter and basic aid (food and cooking, hygiene and bedding items) for over 140,000 of the most vulnerable people. The ICRC has also made major repairs to water and electricity systems, restored almost half of the farmland to a state fit for farming, repaired damage to hospitals, and provided psycho-social support to exhausted emergency workers.

The ICRC has now also completed its analysis of the overall humanitarian impact of the conflict, focusing in particular on how the conflict was waged by both sides. It has shared its findings with the authorities concerned through confidential written reports.

The water and electricity systems in Gaza were severely damaged during the conflict. Keeping them running is still a huge challenge because of the irregular fuel supply to the Strip's only power plant. Nevertheless, the power plant is now operational again. This, combined with the supplies from Israel and Egypt, provides at least 12 hours of electricity per day.

Water has been a priority for the ICRC, because the supply was also severely disrupted in the hostilities. Together with the Coastal Municipalities Water Utility and Gaza's local water board, the ICRC repaired a 22-kilometre network and a well in eastern Gaza, which supply water to 600,000 people. The ICRC also restored the operational capacity of the local water and sanitation boards by providing technical equipment and carrying out repairs.

The damaged pumping stations in the Zeitoun and Sheikh Radwan districts of Gaza caused flooding in a populated neighbourhood a few months ago. In the city of Beit Hanoun, meanwhile, the sewage system was destroyed during the summer hostilities. "We are currently renovating all three sewage pumping stations there, and we have already repaired the sewage network and pipes," explained ICRC water engineer Sara Badei. Overall, 140,000 people will benefit from these efforts.

The conflict not only destroyed or damaged over two-thirds of homes in Gaza, it also ruined up to 1,800 hectares of farmland and irrigation systems along the border. Electricity lines, greenhouses, nurseries, storage warehouses and farming equipment were also affected.

"These farming communities have endured the shock of losing not just their homes, but also their main source of income, with dire consequences," explained Janeth Idolog, who runs the ICRC's economic and livelihood projects in Gaza. Most farmers could not afford to make their land fit to farm again or replace their farming equipment. 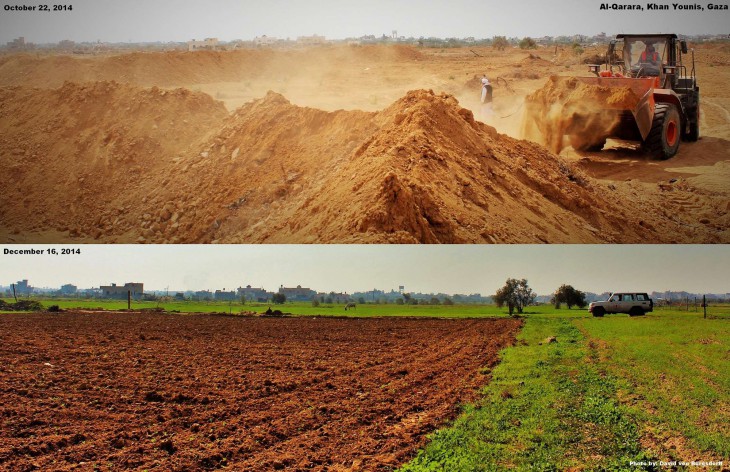 In the border area between Gaza and Israel, 12 bulldozers levelled 750 hectares of farmland that had been churned up during the 2014 conflict and reopened agricultural roads that had been damaged. The project has allowed Palestinian farmers to sow their seeds in time for the winter rainy season. © ICRC/D. Von Burgsdorff

A lot of farmland had to be cleared of unexploded ordnance before the ICRC could start preparing the land for farming. ICRC bulldozers re-levelled 750 hectares of overturned farmland in the 1.5-kilometre border zone, and repaired 15 kilometres of irrigation channels in time for the rainy season. "I'm really happy that the ICRC has helped us get the land ready for planting again," said Abu Attaf, whose olive trees were uprooted during the conflict. "Now I'll be able to plant wheat. The best thing is that I won't miss out on this season's crops."

Some 1,400 families received seed to grow wheat and peas on 575 hectares of cleared land. This will produce a harvest of up to 2,000 tonnes. In addition, six wells serving 600 farming families are being repaired, as are numerous water pipes, tanks and irrigation systems. This will help make vital farmland productive again.

In cooperation with the ministry of health, the ICRC has so far completed repairs in two of the five hospitals – Al Dorra Paediatric Hospital and Beit Hanoun Hospital – that suffered the most damage during the 2014 conflict, and work on the other three hospitals continues. The ICRC also supplied furniture and medical and surgical equipment to nine public hospitals, repaired water leaks in the European Gaza and Al Aqsa hospitals' operating theatres, and supplied essential materials to the ambulance services in Gaza. Additionally, psychological support sessions for front-line health workers who were exposed to traumatic situations during the conflict were run jointly with the ministry of health.

The ICRC also organized two training courses for doctors and nurses from three Gaza hospitals. "The purpose of this course was to strengthen the trauma-management skills of staff working in emergency departments and treating trauma patients," explained ICRC surgeon Charles Philip Barker.

Over 2,500 people with disabilities received physical rehabilitation with ICRC support at the Artificial Limb and Polio Center, the only facility of its kind in Gaza, which provides free artificial limbs, orthotic devices, and rehabilitation services.

The ICRC also teamed up with the Paralympic Committee to sponsor a wheelchair basketball tournament to promote the social inclusion of people with disabilities. The goal of the event was to raise awareness about the needs and plight of disabled people through sport. "Not so long ago, disabled people used to be stigmatized and denied opportunities. The strength, team spirit and determination of the players are highly inspiring. Through sport, they regain their energy and strength," said Asad Ghannam, the PRCS team leader.

Training on treating amputees was organized for 89 participants from the ministry of health's physiotherapy department, Handicap International and the Palestinian Physiotherapy Association. Mental health and psycho-social sessions were also run for the Artificial Limb and Polio Center's staff to help them deal with not only their own distress, but also that of their patients whose disabilities were a result of the conflict.

In September 2014, the ICRC resumed its visits to all places of detention in the Gaza Strip, to monitor detainees' treatment and conditions. The visits are coordinated with the Palestinian detaining authorities. The ICRC also works with the General Administration of Reform and Rehabilitation Centers and the Palestinian security services to improve the material conditions of detention by upgrading infrastructure and donating essential supplies.

Following the conflict in the summer of 2014, family visits to Palestinian detainees in Israeli detention centres were suspended until October 2014. Since January 2015, eligibility for the visits has been extended to include children up to the age of 14.

The ICRC has facilitated nine family visits to detention facilities since October 2014, enabling over 300 detainees to receive visits from 550 relatives. In addition, over 100 family messages have been delivered to Gazan detainees. The ICRC is also following up on families' requests to trace loved ones from whom they were separated due to the conflict.

ICRC staff and 600 PRCS volunteers together delivered emergency kits to 140,000 people whose homes had been damaged or destroyed in the fighting. The ICRC also restocked PRCS reserves with 100,000 litres of fuel and emergency aid supplies for 750 families, to boost its ability to respond in future emergencies. Furthermore, the PRCS and the ICRC have explored in detail how to deal with any future conflict situation more effectively. 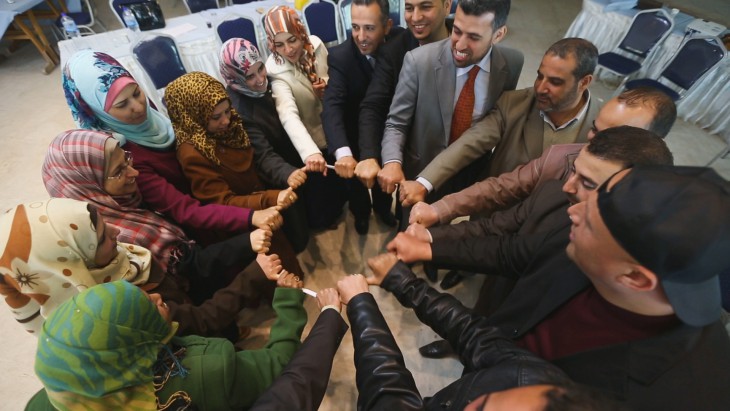 Gaza. ICRC mental-health officers conduct an exercise with nurses, doctors and emergency medical services personnel who worked under a lot of pressure at the front line during the 2014 conflict. The course aims to strengthen their trauma-management skills. © Shadow Pro/ICRC