Humanitarian impacts and risks of use of nuclear weapons 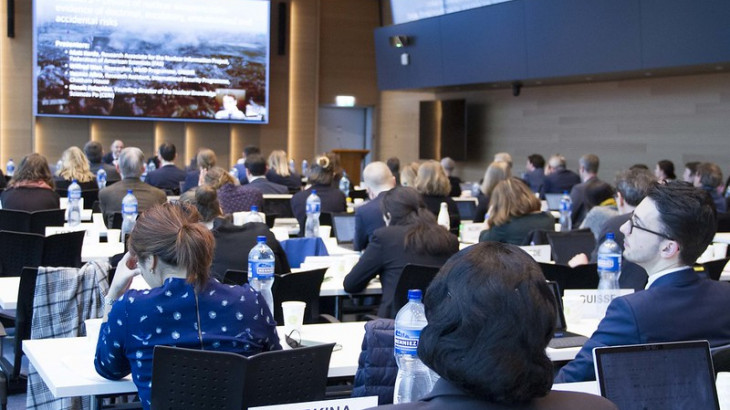 The Red Cross and Red Crescent Movement have brought together experts and government representatives in Geneva for a one-day expert meeting on the humanitarian consequences and the growing risks of nuclear weapons. ICAN

1. On 2 March 2020, the International Committee of the Red Cross (ICRC) and the International Federation of Red Cross and Red Crescent Societies (IFRC) convened a full-day expert meeting on the humanitarian impacts and risks of the use of nuclear weapons. Based on existing and emerging expert research, the meeting aimed to take stock of the humanitarian and environmental consequences of the use and testing of nuclear weapons, as well as the drivers of nuclear risk.

2. In addition to scientific experts from inter alia Sciences Po, Columbia University, Rutgers University, the Federation of American Scientists, Chatham House, the Gender and Radiation Impact Project and the United Nations Institute for Disarmament Research, representatives from approximately 45 states and a range of UN agencies and civil society organizations took part in the meeting. This paper provides a summary of the discussions and is published by the ICRC and the IFRC. It does not necessarily represent the views of the participants.

3. The horrific devastation and suffering witnessed in Hiroshima and Nagasaki in 1945 by Japanese Red Cross and ICRC medical staff, as they attempted to help tens of thousands of dying and wounded people, have left an enduring mark on the entire International Red Cross and Red Crescent Movement and have driven its advocacy of the prohibition and elimination of nuclear weapons over the last 75 years.[1] A few weeks after the atomic bombings of Hiroshima and Nagasaki in 1945, the ICRC and other organizations began documenting the effects of the nuclear explosions on human health, the environment and medical infrastructure.[2]

4. Evidence of the immediate and longer-term impacts of the use and testing of nuclear weapons has been the subject of scientific investigation ever since. In a major 1987 report, the World Health Organization (WHO) summarized existing research into the impacts on health and health services of nuclear detonations. The report noted inter alia that the blast wave, thermal wave, radiation and radioactive fallout generated by nuclear explosions have devastating short- and long-term effects on the human body, and that existing health services are not equipped to alleviate these effects in any significant way.[3] Since then, the body of evidence of the immediate and longer-term humanitarian impacts of nuclear weapons use and testing, and of the preparedness and capacity of national and international organizations and health systems to provide assistance to the victims of such events, has been growing steadily.[4]

5. In 2013 and 2014, three international conferences were organized by the governments of Norway, Mexico and Austria to comprehensively assess existing knowledge of the humanitarian consequences of nuclear weapons.[5] The evidence presented at the three conferences demonstrated inter alia the following:

6. The immediate and longer-term humanitarian and environmental consequences of nuclear weapons use and testing continue to be subject to scientific scrutiny, with emerging evidence and analysis inter alia of the sex- and age-differentiated impacts of ionizing radiation on human health,[14] the long-term impacts of nuclear weapons testing on the environment,[15] including on mortality and infant mortality rates,[16] the consequences of a nuclear war on the global climate,[17] food security,[18] ocean acidification,[19] as well as evidence and analysis of regional preparedness and response measures to nuclear testing.[20] While there are some aspects of these impacts that are not fully understood and require further study (see paragraph 17), these scientific studies reveal new and compelling evidence of long-term harm to human health and the environment from the use and testing of nuclear weapons.

7. There is a particular need for continued and scaled-up efforts to research and understand the humanitarian and environmental consequences of nuclear weapons testing. Communities in former nuclear testing areas – including the Marshall Islands,[21] Kazakhstan,[22] Algeria[23] and the United States[24] – continue to be affected today by the impacts of ionizing radiation released from nuclear tests that occurred decades ago. Many communities report that they do not have sufficient information about their own history of exposure, the current risks of living in a radioactively contaminated area and the intergenerational risks associated with radiation exposure.[25] A lack of transparency and a failure to take the perspectives, lifestyles and needs of communities into account are barriers that need to be overcome in future research efforts.

8. Moreover, while it has been established that women and children are disproportionally affected by ionizing radiation, little is known about the effects of ionizing radiation on reproductive health. Possible questions for further research in this area include: Why is biological sex a factor in radiation harm? Why are the biological sex differences in radiation harm greatest in young children? Is the percentage of reproductive tissue and how it reacts to radiation a contributing factor?[26]

III. The risk of the use of nuclear weapons

11. Since the three conferences on the humanitarian impacts of nuclear weapons, the risk that nuclear weapons may be used has increased. While there are different ways to conceptualize nuclear risks and the sources of these risks, the increased probability of nuclear weapons being used is driven by the following interconnected developments:

12. It is possible to conceptualize the increasing risk of nuclear weapons being used according to the following four risk-of-use scenarios:

b)      escalatory use, i.e. the use of nuclear weapons in an ongoing situation of tension or conflict

c)       unauthorized use, i.e. the non-sanctioned use of nuclear weapons by a non-state actor

d)      accidental use, i.e. the use of nuclear weapons through error, including technical malfunction and human error.[34]

13. When assessing the risks arising from technological developments, it is important to consider these technologies both individually and in combination. New technologies may interrelate and depend on each other, thus affecting decision-making systems in unpredictable ways. For example, increased reliance on digital technologies in decision-making processes may create new sources of error that may be difficult to detect, potentially leading to a misplaced overconfidence in the ability of these technologies to deliver accurate information. The introduction and use of new technologies may also lead a state to misinterpret or misunderstand the behaviour of another state, thereby increasing the likelihood of unnecessary escalation.[35]

14. It is important to note that offering an objective and meaningful quantification of these risks may not be possible and engaging in such quantification may create a sense of overconfidence. Objective probability estimates are based on experience and exclude new and unprecedented paths to nuclear catastrophe. Using the language of risk may therefore create a false sense of controllability and manageability by creating an illusion that all the possible paths to disaster have been anticipated and accounted for. The concepts of “luck” and “vulnerability” may better capture our inability to control and manage the possible use of nuclear weapons and therefore provide a more accurate understanding of the dangers posed by these weapons.[36]

15. Research into the various immediate and long-term impacts of nuclear weapons use and testing is important in itself because it informs us of the unique characteristics of these weapons. Such research also provides a crucial basis for humanitarian preparedness and response, and is important in upholding the rights of the individuals and communities affected. The evidence of the humanitarian impacts of nuclear weapons is essential to assess the legality of their use under international humanitarian law (IHL) and it gives a fact-based entry point for discussions about nuclear disarmament and nuclear non-proliferation, more broadly.

17. Although much is already known about the humanitarian and environmental impacts of nuclear weapons, there is a need for more research in certain areas. In particular, we need to understand more about the long-term humanitarian and environmental effects of nuclear weapons testing, as well as the sex- and age-differentiated and, potentially, intergenerational consequences of ionizing radiation.

[2] ICRC, “ICRC report on the effects of the atomic bomb at Hiroshima”, 2016: https://international-review.icrc.org/articles/icrc-report-effects-atomic-bomb-hiroshima.

[4] John Borrie and Tim Caughley, An Illusion of Safety: Challenges of Nuclear Weapon Detonations for United Nations Humanitarian Coordination and Response, UNIDIR, 2014, pp. 8–15 for a contextual overview of research into the humanitarian consequences and capacities to respond to nuclear detonations: https://unidir.org/publication/illusion-safety-challenges-nuclear-weapon-detonations-united-nations-humanitarian.

[5] Alexander Kmentt, “The Humanitarian Consequences and Risks of Nuclear Weapons: Taking stock of the main findings and substantive conclusions”, presentation to the ICRC and IFRC expert meeting in Geneva on 2 March 2020 with an overview of the evidence presented at the three conferences; ILPI, “Evidence of Catastrophe: A summary of the facts presented at the three conferences on the humanitarian impact of nuclear weapons”, ILPI, 2015.

[9] Matthew McKinzie et al., “Calculating the Effects of a Nuclear Explosion at a European Military Base”, 2014, presentation to the Vienna Conference on the Humanitarian Impact of Nuclear Weapons: https://www.bmeia.gv.at/fileadmin/user_upload/Zentrale/Aussenpolitik/Abruestung/HINW14/Presentations/HINW14_S1_Presentation_NRDC_ZAMG.pdf.

[10] Neil Buhne, “Social and economic impacts: Structural restoration of lives and livelihoods in and around affected areas”, 2013, presentation to the Conference on the Humanitarian Impact of Nuclear Weapons, Oslo: https://www.regjeringen.no/globalassets/upload/ud/vedlegg/hum/hum_buhne.pdf.

[11] Dominique Loye and Robin Coupland, “Who will assist the victims of use of nuclear, radiological, biological or chemical weapons – and how?”, 2007: https://international-review.icrc.org/articles/who-will-assist-victims-use-nuclear-radiological-biological-or-chemical-weapons-and-how; ICRC, “Humanitarian assistance in response to the use of nuclear weapons”, 2013: https://www.icrc.org/en/doc/assets/files/2013/4132-3-nuclear-weapons-humanitarian-assistance-2013.pdf; John Borrie and Tim Caughley, An Illusion of Safety: Challenges of Nuclear Weapon Detonations for United Nations Humanitarian Coordination and Response, UNIDIR, 2014: https://www.unidir.org/files/publications/pdfs/an-illusion-of-safety-en-611.pdf.

[14] Mary Olson, “Disproportionate impact of radiation and radiation regulation”, Interdisciplinary Science Reviews, 2019: https://www.tandfonline.com/doi/full/10.1080/03080188.2019.1603864, presented to the ICRC and IFRC expert meeting in Geneva on 2 March 2020. (In November 2022, Olson corrected an error in one of her visualizations of the degree of difference in cancer outcomes from the exposure of young girls and adult males, respectively: A Correction — Gender + Radiation Impact Project)

[17] Alan Robock et al., “How an India-Pakistan nuclear war could start–and have global consequences”, Bulletin of the Atomic Scientists, 2019: http://climate.envsci.rutgers.edu/pdf/IndiaPakistanBullAtomSci.pdf.

[24] Lilly Adams, “The human cost of nuclear weapons is not only a “feminine” concern”, Bulletin of the Atomic Scientists, 2019: https://thebulletin.org/2019/11/the-human-cost-of-nuclear-weapons-is-not-only-a-feminine-concern.

[25] Masaki Koyanagi, presentation to the Second International Conference on the Humanitarian Impact of Nuclear Weapons, 2014: https://www.reachingcriticalwill.org/images/documents/Disarmament-fora/nayarit-2014/statements/Hibakusha-Koyanagi.pdf, giving the perspective of a third-generation hibakusha. The Radiation Effects Research Foundation (RERF) is currently carrying out a research programme on the children of atomic-bomb survivors.

[26] Mary Olson, presentation to the ICRC and IFRC expert meeting in Geneva on 2 March 2020.

[27] Patricia Lewis et al., “Too Close for Comfort: Cases of Near Nuclear Use and Options for Policy”, Chatham House, 2014: https://www.chathamhouse.org/publications/papers/view/199200.

[28] Alexander Kmentt, “The Humanitarian Consequences and Risks of Nuclear Weapons: Taking stock of the main findings and substantive conclusions”, presentation to the ICRC and IFRC expert meeting in Geneva on 2 March 2020. The point was also made in the statement, “Never again: Nagasaki must be the last atomic bombing”, International Red Cross and Red Crescent Movement, 2017: https://www.icrc.org/en/document/never-again-nagasaki-must-be-last-atomic-bombing.

[36] Benoît Pelopidas, “The unbearable lightness of luck: Three sources of overconfidence in the manageability of nuclear crises”, European Journal of International Security, 2017: https://www.cambridge.org/core/journals/european-journal-of-international-security/article/unbearable-lightness-of-luck-three-sources-of-overconfidence-in-the-manageability-of-nuclear-crises/BDE95895C04E7E7988D15DB4F217D1E4; Benoît Pelopidas, “Power, luck, and scholarly responsibility at the end of the world(s),” International Theory, 2020: https://spire.sciencespo.fr/notice/2441/2gpssdhlp88r38vuhhl2h9et2v; Papers presented to the ICRC and IFRC expert meeting in Geneva on 2 March 2020.