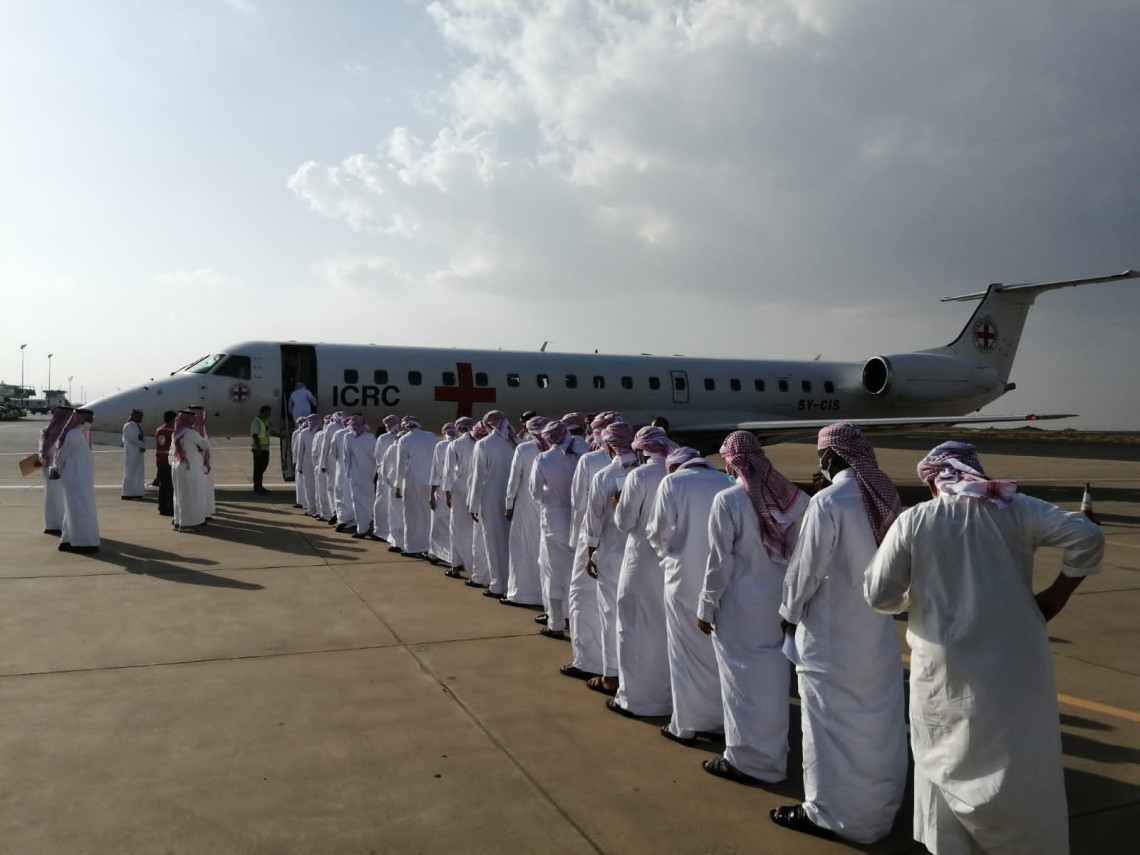 Geneva (ICRC) – The International Committee of the Red Cross (ICRC) facilitated the repatriation of 117 detainees on Friday from Saudi Arabia to Yemen, following a request from the Joint Forces Command (JFC) of the Coalition Forces
News release 06 May 2022 Yemen

The ICRC agreed to assist in this unilateral release of detainees by the Coalition upon the request of the JFC and based on its humanitarian mandate in situations of armed conflict.

"We are pleased to see that humanitarian considerations are being prioritized for the sake of the families, who are waiting for their loved ones to return home," said Katharina Ritz, head of the ICRC delegation in Yemen. "It is important to alleviate the suffering of the many Yemenis who continue to suffer from more than 7 years of conflict. This includes detainees and their families."

Before the repatriation, the ICRC conducted pre-departure interviews in private with the detainees in a Coalition Detention Center in Saudi Arabia. During the interviews, ICRC teams confirmed the detainees' identities and verified that all those eligible for release wished to be repatriated to Yemen. An ICRC medical team also assessed the health condition of detainees and confirmed that they were fit to travel. An ICRC team then accompanied the detainees back to Yemen to oversee the transfer and address any medical needs or emergencies.

"This is a positive step and an important humanitarian gesture," said Omar Odeh, head of the ICRC regional delegation for the GCC countries. "The ICRC stands ready to contribute to the release, transfer and repatriation of all conflict-related detainees so they can be reunited with their families after years of separation," he continued.

The Saudi Red Crescent Authority and Yemeni Red Crescent Society both played an essential role during the operation, supporting respectively the departure and reception of the returnees with volunteers and first aid specialists. After their arrival in Yemen, the former detainees received further support to continue their journey to their respective homes.

The release was announced unilaterally by the JFC and took place during the second month of the truce agreed by parties to the conflict in Yemen. It was preceded by the release of 37 persons by the JFC without involvement of the ICRC and for whom the ICRC received the necessary details for its humanitarian follow up.

The ICRC has been present in Yemen for over 60 years, and for more than 30 across the Gulf Cooperation Council Countries including 6 years in Saudi Arabia, working to promote respect for international humanitarian law in times of conflict and providing humanitarian assistance to communities in need.