The ICRC in Azerbaijan in 2019 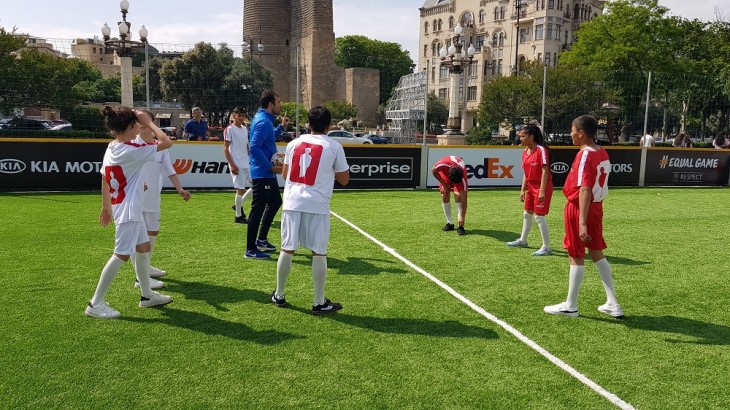 Children from vulnerable families living in communities exposed to the Nagorno-Karabakh conflict are playing mini football in the UEFA pitch in specially printed shirts with the logo of missing. Amil HASANOV/ICRC

In 2019, the ICRC delivered humanitarian assistance to thousands of beneficiaries in communities affected by the Nagorno-Karabakh conflict. Our colleagues carried out activities related to humanitarian protection, economic security, raising awareness on safe behaviour, and water and habitat.

In 2019, thanks to the ICRC's neutral intermediary role, approximately 3,000 people had safe access to fields in exposed areas for planting, harvesting and repairing vital infrastructure.

More than 9,500 people in twelve communities received agriculture or livestock inputs to improve their livelihoods. Thanks to cash transfers for microeconomic initiatives project and cash for work activities, 205 people witnessed a rise in their incomes. As many as 2,314 people experienced restored or improved access to water and better quality of electricity after infrastructure upgrade work conducted by the ICRC.

The ICRC also continued raising awareness on various topics such as safe behaviour, weapon- related risk and efficient use of water. Our colleagues reached out to more than 2,000 people sensitizing them on risk awareness and safe behaviour to increase their resilience to weapon contamination. As many as 3,570 civilians received knowledge on how to use water efficiently through leaflets and posters.

The fate of missing people remained another focus point for the ICRC as we continued our collaboration with authorities to bring answers to the families of missing people in relation to the Nagorno-Karabakh conflict. More than 2,100 biological reference samples were collected from the relatives of missing people to help the identification process in the future. To draw more attention to the needs and rights of families to know the fate of their loved ones, the ICRC organized a concert to mark the International Day of the Disappeared. Moreover, the ICRC participated in the UEFA Europa League fan festival where related messages were conveyed to hundreds of guests. Within the activity, a four-day trip to Baku was organized for fifteen children from vulnerable families living in communities exposed to the Nagorno-Karabakh conflict.

The ICRC also continued its efforts to promote the international humanitarian law (IHL) as its guardian. During the year, as many as 1,620 servicemen and cadets of the Azerbaijani army participated in various events where they received knowledge on the IHL.

Highlight of our work in Azerbaijan in 2019: