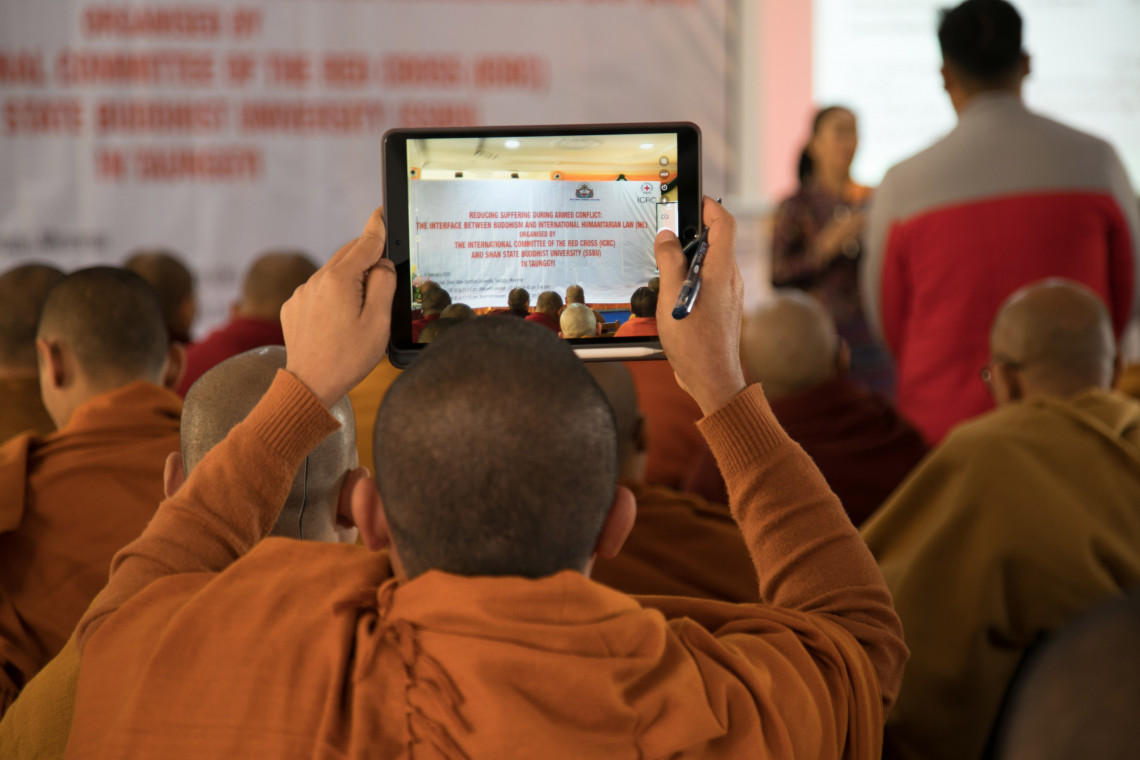 From 8 to 9 February 2020, the ICRC delegation in Myanmar, together with the Global Affairs Unit in Bangkok, made a significant step forward in terms of engagements with Buddhist circles in Asia by co-hosting, for the first time, a workshop with the Shan State Buddhist University (SSBU) entitled "Reducing Suffering During Armed Conflict: The Interface between Buddhism and IHL". Nearly 50 prominent scholar monks, nuns, and students from across Shan and other states exchanged their views with the ICRC on the synergies between Buddhism and International Humanitarian Law.

The workshop was supported by the professor Dr Khammai Dhammasami, founder of the SSBU, and was aligned with the commemorations marking the fourth anniversary of the university. In light of the anniversary celebrations, the Union President of Myanmar U Win Myint visited the SSBU a day prior to the workshop and could also be met by members of the ICRC team.

Over the two days, participants discussed Buddhist and IHL concepts and principles as they relate to topics such as compassion and dignity, use of deadly force, self-discipline and control, self-awareness, responsibilities of governments, sexual violence, emergency response to the most vulnerable, and care for the injured. Many exchanges also took place around humanitarian principles and ICRC's operations, mandate and identity.

Capitalizing on the positive outcomes of the first international conference on Buddhism and International Humanitarian Law held by the ICRC delegation in Sri Lanka in September 2019, this new event exemplified the growing networking approach that the delegation in Myanmar, supported by the Global Affairs Unit of Bangkok, is carrying out with Buddhist and other religious circles over the past two years, a key element of the ICRC's acceptance on the field, but also of its acknowledgement as a neutral organization engaging all segments of society.

Dr Asanga Tilakarante, one of the leading Buddhist scholars in Asia, shared his perspective that explored the reality of conflict, and how they could be reconciled with Buddhist ideals as well as international humanitarian law.

"It was a rare privilege and an important opportunity for us to jointly host this exchange with SSBU," explained Stephan Sakalian, the ICRC head of delegation in Myanmar. "We look forward to building on this extremely rich experience and discussions, where we could learn from one another in the interest of helping those affected by conflict and violence."