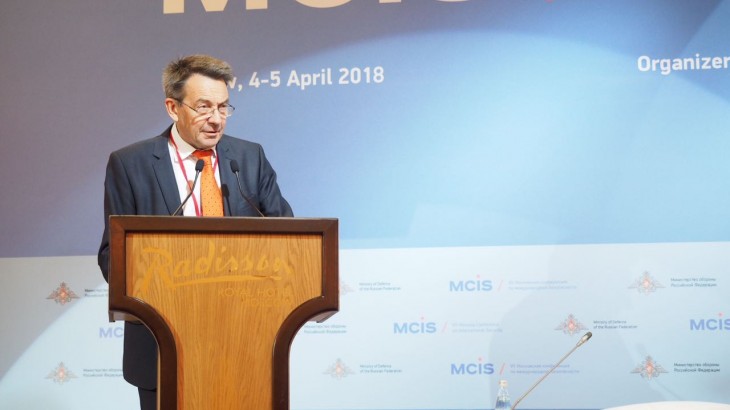 MOSCOW (ICRC) – The changing nature of conflict is blurring the lines between military and civilian, ICRC President Peter Maurer said on Wednesday, noting the devastating consequences of this and other trends and urging more respect for international humanitarian law (IHL).

Addressing the Moscow Security Conference after visits to Syria, Iraq, Libya, Sudan, the Central African Republic, and more, Mr Maurer described the changing nature of conflict. Around the world, but especially in the Middle East, armed actors have become more numerous and more radical, the use of force has become increasingly disproportionate, more battles are fought in urban areas using explosive weapons in densely populated areas, and weapons have become easier to obtain.

“While each conflict has its particular dynamics, it is shocking to see the deep humanitarian impact of such fundamental transformations, which often is accompanied by a blurring of lines between civilians and militaries and an unwillingness and inability to adequately protect those who are not participating in hostilities,” he said.

The consequences of these trends are devastating, especially when combined with the erosion of basic infrastructure such as health, water, and sanitation.

In addition to the loss of human lives, including children under the age of five, conflict and violence cost the global economy US$14 trillion each year, or 14 percent of global GDP. More than 1.5 billion people live in an environment of continuous fragility, violence, and conflict.

“Whatever the motives by which present day warfare is legitimised, this cannot be an acceptable result for responsible leadership,” he said, noting that today’s conflicts are increasingly protracted.

“In our ten largest operations, we have been on the ground for an average of 36 years, and still the wars continue.”

Mr Maurer urged states to respect IHL, the body of law that protects populations affected by armed conflict and limits the methods of warfare.

“Each of its rules contains a balance between humanity and military necessity, allowing armies to exercise common decency,” he said.

“Humanitarian assistance programmes will have limited success if we do not make major efforts to change behaviour on the battlefields.”

As a neutral, impartial, and independent organisation, the ICRC facilitates humanitarian action, works with all parties to protect all those affected by armed violence, and engages in dialogue to minimise the impact of war on civilian populations.

As the ICRC’s chief diplomat, Mr Maurer speaks widely on IHL and its implementation. In February, he attended the Munich Security Conference. In March, he spoke with authorities in Syria, Iran, and Iraq, as well as with officials at the European Union and at NATO.

Mr Maurer’s next scheduled visit to Russia is in November, when he will return to celebrate the 150th anniversary of the St Petersburg Declaration, the world’s first ever arms control treaty. With that declaration, Russia took a lead role in minimising unnecessary suffering by prohibiting a weapon it had developed itself. The principles of this treaty are more relevant than ever today.