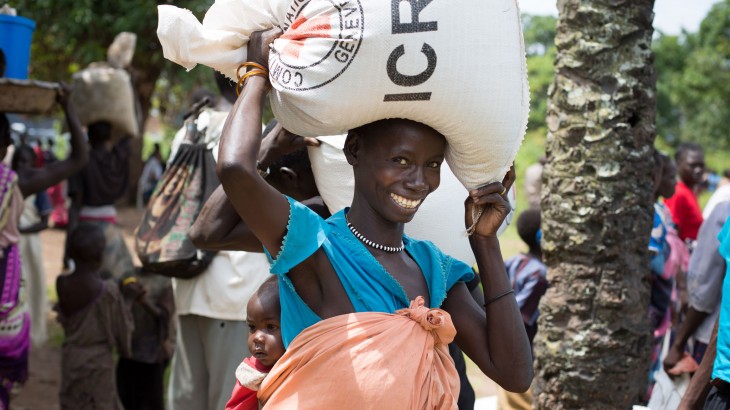 The fourth year of South Sudan's civil war saw a severe deterioration of humanitarian conditions across the country. The conflict has claimed innumerable lives and left millions forcibly displaced from their homes and unable to meet even their most basic needs. Levels of acute insecurity reached an all-time high last year with six million people unable to provide sufficient amount of food.

The ICRC continued to work on the frontlines of the crisis throughout 2017, providing lifesaving assistance to the most vulnerable. This included fighting food insecurity and disease by delivering emergency food aid, relief supplies, as well as water and sanitation facilities to remote and food-insecure communities. At the same time, the ICRC distributed seeds, tools, and fishing nets to help vulnerable communities affected by the conflict to get back on their feet.

2017 also saw intense fighting and shifting frontlines. It was necessary for the ICRC to leave the health facilities it was supporting in Waat, Kodok, and Maiwut. To ensure medical services could still be provided, the ICRC began supporting health structures in Old Fangak, Ganyleil, and Akobo.

In 2017, the number of war-wounded people that the ICRC evacuated by air for surgical medical care almost doubled compared with 2016. At the same time, the ICRC maintained its support to medical structures including Juba Military Hospital and Wau Teaching Hospital and several primary health care units in remote locations.

In September, the ICRC suffered the tragic loss of one of its staff. Lukudu Kennedy Emmanuel Laki, a driver, was shot and killed while helping to deliver aid to the victims of the conflict in Western Equatoria. Consequently, the ICRC immediately suspended most of its activities in the region, and resumed a month later after receiving security reassurances from the concerned parties. Kennedy was the first ICRC staff member to lose his life in a violent attack since the beginning of the conflict in December 2013.

Highlights of our work in South Sudan in 2017.

For more information, read the full update on our work in South Sudan.