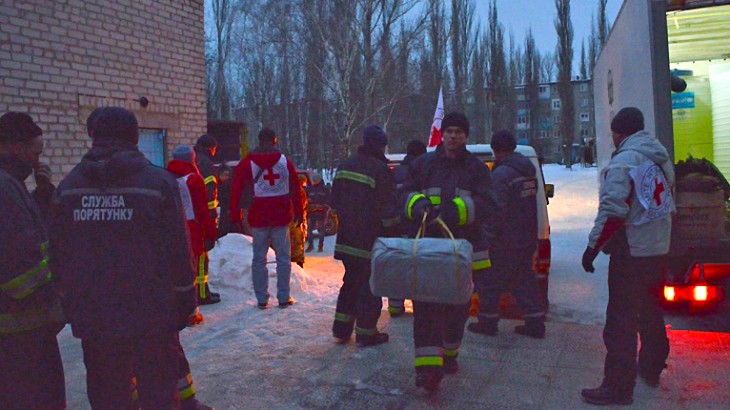 With tens of thousands of people living by the line of contact in eastern Ukraine caught in a spike in the hostilities since Sunday, the ICRC is warning of the toll that the fighting is having on civilians and on the functioning of essential services, resulting in electricity, water and heating cuts amid freezing temperatures.

"We are very concerned at the impact on civilians triggered by this escalation in fighting," said Alain Aeschlimann, head of the International Committee of the Red Cross in Ukraine. "Several vital installations, including electricity and water lines, have been targeted, with potentially tremendous humanitarian consequences for hundreds of thousands of people on each side of the front line."

The fighting has been most severe around the town of Avdiivka, but other areas have also been affected, with casualties and destruction reported in many other areas of the Donetsk and Lugansk regions.

The ICRC is working on both sides of the front line and supporting the efforts of the local authorities to provide aid and address the most urgent needs.

"The main priority is to restore power and repair the damaged water line," explained Mr Aeschliman. Along with a number of other organizations, the ICRC asked for a reinforced ceasefire to enable repair teams to fix the damaged electricity lines. The ICRC is now working to provide fuel for generators.

International humanitarian law dictates that objects essential to the survival of the civilian population, like water and electricity installations, must be spared. The use of explosive weapons with wide impact area should also be avoided in populated areas.

"We call on all those concerned to make sure these rules are respected, that civilians and medical staff and facilities are protected, and not put at risk while hostilities continue," said Mr Aeschlimann.

"The conflict in Donbass is about much more than politics and numbers," he added. "It is affecting densely populated areas, where many people live. It has a human face, and despite the impressive resilience demonstrated by the local population here, this conflict is destroying people's lives."

The ICRC hopes to do more in the coming hours and days, in coordination with the relevant authorities and humanitarian organizations. It is ready to act as a neutral intermediary to enhance the protection of civilians and the infrastructure needed for their survival.