The ICRC in WWI: Efforts to ban chemical warfare

Faced with the growing use of poisonous gases on the battlefield, causing terrible injuries, the ICRC appealed publicly for a ban on their use. Despite the controversy surrounding the issue, the call helped bring about the 1925 Geneva Protocol – still in force today. 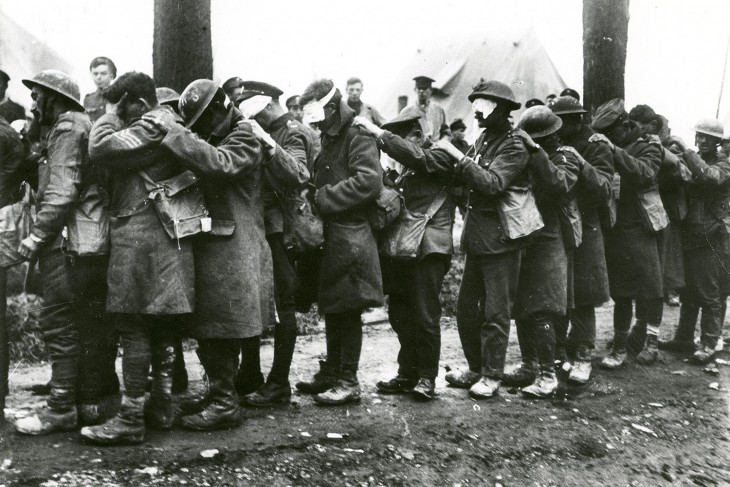 The first poisonous weapons emerged in the fighting on the western front in 1915. During the following two years these weapons were extensively used by the warring parties. In July 1917, near the town of Ypres in Belgium, the Germans used mustard gas for the first time; it subsequently became known as "yperite" by analogy with the name of the town.

In early 1918, the ICRC feared that use of these indiscriminate weapons of mass destruction could become widespread. To curb this alarming escalation in means of warfare it invoked the Regulations annexed to the Hague Conventions of 1899 and 1907 respecting the Laws and Customs of War on Land, which prohibit the use of poisoned weapons, and a Declaration made by the States party to the 1899 Convention prohibiting the use of projectiles which diffuse asphyxiating gases.

On 6 February 1918 it launched an appeal against the use of poisonous gases, intended to convince the belligerents to renounce these weapons by virtue of an agreement concluded under the auspices of the Red Cross.

In deciding to actively oppose poisonous weapons, the ICRC was embarking on a new course of action which went beyond assisting victims and ventured into the area of methods and techniques of warfare. In this respect it was tackling a very controversial issue which was the subject of mutual accusations on the part of the belligerent States.

However, in order to protect the victims of war, the ICRC decided to pursue its course and to give wide publicity to its efforts. On 8 February 1918 it sent the text of its appeal to the monarchs and heads of State of the belligerent and neutral countries, the national societies, various religious leaders and the press.

Encouraging responses reached Geneva – in particular from the Danish, Norwegian and Swedish Red Cross societies, which all expressed their approval. The Vatican also expressed its support for the ICRC's initiative.

This success prompted the ICRC to make representations to the major powers which remained reticent. In March 1918 Édouard Naville, Acting President of the ICRC, and Dr Ferrière, its Vice-President, went to Paris. The President of the French Republic, Raymond Poincaré, informed them that the Allies were prepared to issue a declaration to the effect that they would cease t o use gas on condition that their adversaries, the Central Powers, did likewise.

In May 1918 the governments of the Entente sent the ICRC an official response to its appeal of 6 February. In it they stated their support for the ICRC's initiative and even accepted the idea of an agreement prohibiting the use of gas, but assigned responsibility for chemical warfare to the other side.

The German government's reply reached the ICRC on 12 September. After drawing attention to the position that it had adopted at The Hague Conference in 1899 in favour of banning poisonous weapons and its protests about the use of gas on the European front, Germany in turn accused its adversaries of being responsible for inventing and developing gas-based weapons for use in the conflict.

In the event, the steps taken by the ICRC were partially successful; the positive impact would only become clear later. The fact remains that the need for a complete ban on weapons of this kind was officially proclaimed during the First World War by the ICRC, which continued to work towards that goal by seeking support from academic and military circles and the national societies.

This work was to contribute directly to the adoption in Geneva on 17 June 1925 of the Protocol for the Prohibition of the Use in War of Asphyxiating, Poisonous or other Gases and of Bacteriological Methods of Warfare. It was, moreover, only the first stage in a series of studies that the ICRC was subsequently to carry out on weapons which strike indiscriminately – such as nuclear and biological weapons and landmines – and which are still among the key concerns of the International Red Cross and Red Crescent Movement today.