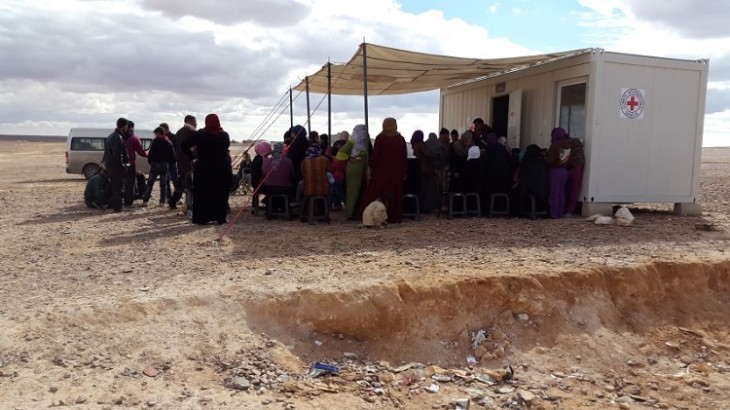 Geneva (ICRC) - Tens of thousands of people are in need of urgent assistance in a border area between Syria and Jordan. They are living in extremely harsh conditions in a desert area known as 'the berm'. The vast majority are women and children, who are seeking sanctuary from the ongoing violence in Syria. The reticence by so many Governments to take in more Syrian refugees means that the fate of these asylum seekers hangs in the balance.

"People fleeing conflict have the right to seek asylum and protection, and the international community must urgently find a solution to ensure their protection and well-being," said the ICRC's Regional Director for the Near and Middle East, Robert Mardini. "This is not just about Jordan. The crisis at the berm reflects an international failure to protect and help people affected by conflict and who are in desperate need. The circumstances people are living in right now are unacceptable. Only immediate and concerted international action will relieve their plight."

Following a car bomb attack on a military post near the Rukban crossing point on June 21, the berm area was declared a closed military zone and the ICRC has since been unable to return to the berm settlements of Rukban and Hadalat to provide medical support. The deterioration in the security situation means that it has become extremely difficult for organisations such as the ICRC to reach, assess and respond to people's needs, and consequently the ICRC is scaling down its operations.

"Until a real and sustainable solution is found for the thousands of families trapped at the berm, immediate measures must be taken to ensure they can receive protection and assistance in a safe environment," Mardini continued. "Priority attention must be given to the most vulnerable, including urgent medical cases, pregnant women and infants, and unaccompanied minors. Independent humanitarian organisations must be able to reach all those in need of safety, and be able to deliver their assistance according to internationally recognized humanitarian standards."