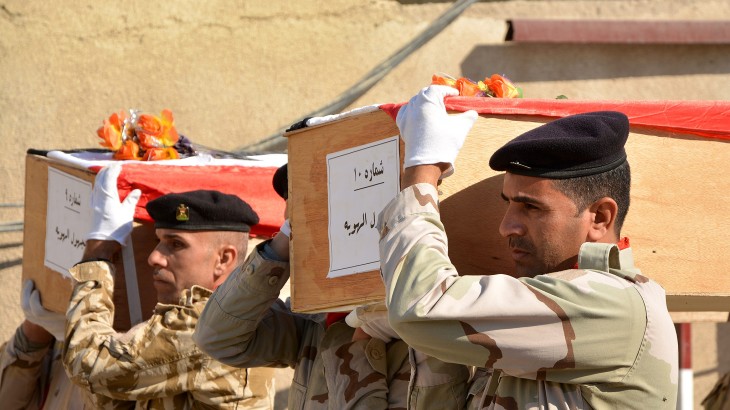 Baghdad/Tehran (ICRC) - The ICRC has once again participated in the handover of the remains of soldiers killed during the Iran-Iraq war.

The remains were repatriated to their respective countries on 22 January 2015 during a ceremony at the Shalamcha border crossing near Basra (Iraq), attended by military and civilian officials from both countries in the presence of ICRC staff. Of the remains repatriated during this ceremony, forensic teams have so far identified 46 of the Iranian soldiers and 3 of the Iraqi personnel. Work continues on identifying the others.

"Over 25 years have passed since the guns fell silent, yet thousands of families on both sides still don't know what happened to their loved ones," said Patrick Youssef, who heads the ICRC delegation in Iraq. "It is vital that families know the fate of their missing sons if they are to reach any kind of closure and deal with their pain."

The ICRC is currently assessing the needs of families of missing persons in Iraq to see what help they require.

"We applaud the steps already taken jointly to recover human remains from the Iran-Iraq war," said Olivier Martin, who heads the ICRC's mission in Iran. "In particular, today's ceremony is only possible thanks to the cooperation and determination of the Iranian and Iraqi governments."

Under international humanitarian law, families have a right to know the fate of their missing relatives. The two sides have shown commitment to ensure that this right is respected.

A Tripartite Committee on persons missing since the Iran-Iraq war brings together Iran, Iraq and the ICRC. The ICRC has been acting as a neutral intermediary, supporting the process of finding out what happened to these missing persons by attending handovers of remains, training Iranian and Iraqi forensic personnel and supplying specialized equipment for the recovery and identification process.

Shalamcha border crossing, Iraq. ICRC staff participate in the handing over of the remains.

Shalamcha border crossing, near Basra, Iraq. The remains of Iranian soldiers are repatriated.