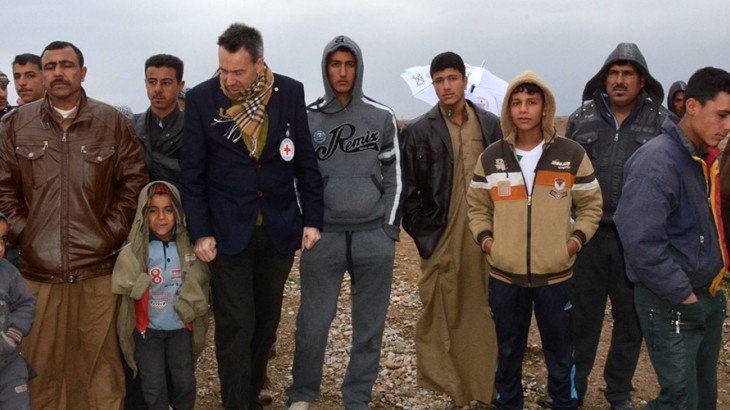 Baghdad/Erbil/Geneva (ICRC) – At the end of a six-day visit to Iraq, the president of the International Committee of the Red Cross (ICRC) vowed to scale up assistance to displaced people and the communities hosting them.

President Peter Maurer witnessed the difficult conditions endured by people as a result of ongoing fighting, long periods of displacement, loss of property, and freezing temperatures. He joined ICRC teams distributing food and other relief and visited a facility that provides clean drinking water to displaced people.

"This week I have heard heartbreaking stories of families uprooted violently from their homes and separated from their loved ones," said Mr Maurer. "The people of Iraq have shown extraordinary solidarity with their fellow countrymen and women who have fled the violence in their thousands. When the ICRC comes to deliver aid to the displaced, it finds that local communities have already received these people in distress with open arms and great generosity. But in the face of the enormous suffering of the displaced and the additional pressure on host communities and services, we all have a duty to ensure that their basic needs in terms of food, water, health care and shelter are met."

During his visit, the ICRC president also met with top officials in Baghdad and Erbil, including Iraqi President Fouad Massoum, Prime Minister Haider al-Abadi and the Speaker of Parliament, Salim al-Jubouri. In Erbil, he held meetings with the President of the Kurdistan Region, Massoud Barzani, Prime Minister Nechervan Barzani, the Speaker of the Regional Parliament, Yousif Mohammed, and other high-ranking officials.

In these meetings, Mr Maurer described the challenges faced by humanitarian workers in the field, such as reaching people in need and delivering aid and health care in areas affected by the violence. "I am encouraged by the commitment of the leaders I have met to sparing and protecting civilians from violence by ensuring that the armed and security forces respect international humanitarian law," Mr Maurer said.

Mr Maurer joined an ICRC team conducting a prison visit in Baghdad. "Individuals detained in connection with the armed conflict must be treated with dignity and respect," he said. "The ICRC is striving to step up visits of this kind to ensure that conditions of detention meet international standards and that detainees can stay in touch with their families."

The ICRC operation in Iraq is its fourth largest operation in the world, amounting to 76 million Swiss francs in 2015 (78 million US dollars). One third of its worldwide budget is used to fund its operations in the Middle East.