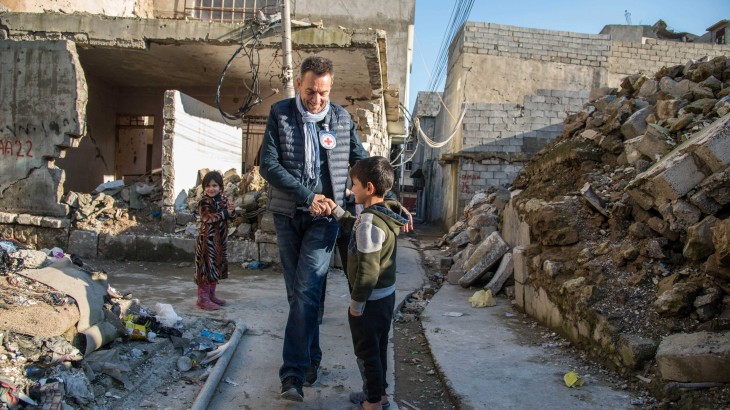 Baghdad/Geneva (ICRC) – Rebuilding Iraq's social fabric is key to ensuring that the country can leave its violent past behind, the president of the International Committee of the Red Cross (ICRC) said during a four-day visit to the country, which included Mosul, Baghdad and Erbil.

ICRC President Peter Maurer highlighted the extraordinary challenges that communities across the country continue to face, including the fact that 1.8 million people remain displaced within Iraq more than a year after major combat operations ended, with nearly one in three still living in camps.

"The magnitude of the destruction in Iraq doesn't get any less shocking, but what's less visible are the social scars that run deep in Iraq today," Mr Maurer said.

"If Iraq is to get back on its feet, then society must work towards reconciliation. Within that process, safe and voluntary returns without discrimination for all displaced Iraqis who wish to go back to their homes need to be ensured."

Mr Maurer added that conditions must be right for people to return home and stressed the significant ongoing humanitarian needs for the population at large.

"The returns process cannot be rushed," he said. "People need adequate housing and basic services, including drinking water and health care, as well as livelihood opportunities, security and the clearance of unexploded ordnance."

Referencing the crucial reconciliation process, Mr Maurer highlighted the need for judicial processes and dignified conditions of detention to be applied equitably to all detainees irrespective of the charges they face or their country of origin.

He also drew attention to the critical need to clarify the fate of the large number of people still missing, which are from decades of different rounds of conflict and thought to be in the hundreds of thousands.

"Those who are missing loved ones must get the answers they need," he said. "In Mosul I met families searching for their sons, fathers and husbands. They told me of the daily emotional agony of not knowing what happened to their relatives. Iraqi society – and its authorities – need to tackle these emotional issues head-on."

For all of the immense destruction still visible in Mosul, there are some hopeful signs of a return to normal life. Mr Maurer said: "People are clearing their homes of rubble and have even opened shops in the most damaged western part of the city, and that's testimony to the resilience of the Iraqi people."

During his 1-4 February visit, Mr Maurer met with Prime Minister Adel Abdul-Mehdi, President Barham Salih, Deputy Prime Minister Fouad Hussein, and Speaker of Parliament Mohammed al-Halbousi, and expressed the ICRC's commitment, alongside its partners in the Iraqi Red Crescent Society, to continue to assist the Iraqi people during the current recovery phase following multiple cycles of violence and uncertainty.

Photos and videos from Iraq are available to download.