Iraq: A tough year for civilians, especially the displaced 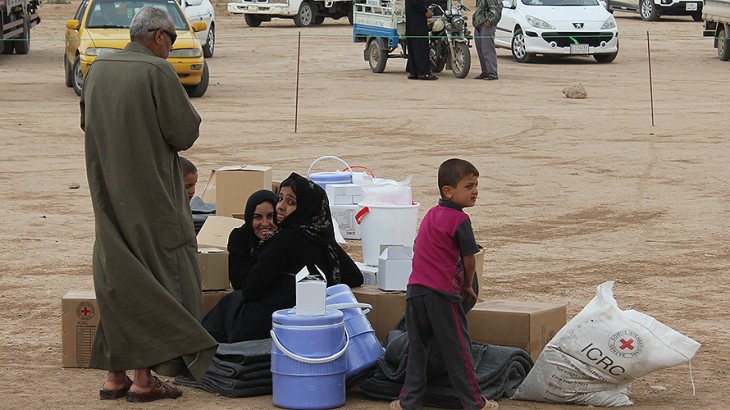 Another year in nearly three decades of turbulence in Iraq that saw various armed conflicts and other violence is coming to an end, but is also taking an immense toll on the civilian population. More than two million people were displaced in 2014 and key infrastructure was destroyed. For some, the hope of returning home remains elusive. The ICRC, which has been working in Iraq since 1980, ramped up its activities massively during the year and brought aid to more than two million people.

An estimated two million displaced Iraqis have taken refuge with relatives, host families or in makeshift shelters or camps. Thousands have been killed or injured. "Displaced civilians have had an appalling year. Some have been displaced multiple times. Living conditions, particularly for women, children and the elderly, have been dire. Their present is a struggle and their future uncertain," said Patrick Youssef head of the ICRC delegation in Iraq. "We are doing everything we can with the resources available to us to improve their lives. Their needs are immense."

Since January, the ICRC has distributed one-month food rations and other relief items such as blankets, kerosene stoves, tarpaulins, jerrycans and kitchenware to nearly 594,000 displaced people in 156 locations in 17 of the country's 18 provinces. Nearly 28,000 of the recipients were given food and other items more than once.

With the onset of winter and rains, the ICRC has also provided winterization packages, which included food, other essential relief items and clothing, for 42,000 displaced people. In addition, the ICRC provided cash assistance for about 20,000 displaced people in Najaf to help them attend to their immediate needs. To restore the ability of conflict-affected people to earn a living, the ICRC has also distributed about 1,800 metric tonnes of seed and fertilizer to over 5,000 farming families in the provinces of Babel, Karbala, Baghdad, Diyala, Kirkuk and Ninewa. Furthermore, it has upgraded five irrigation canals serving over 31,000 people. 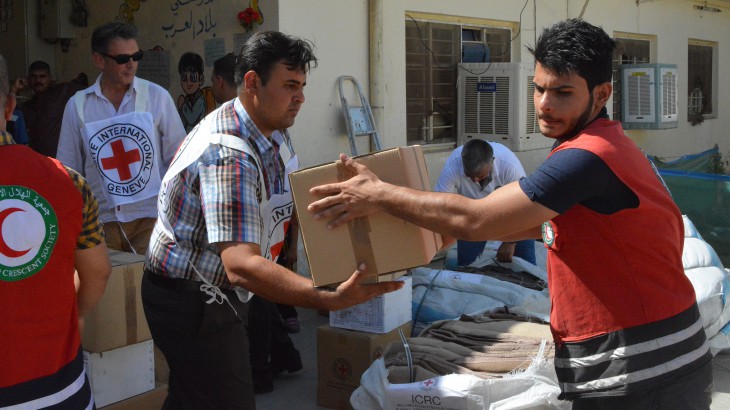 ICRC and Iraqi Red Crescent staff working together during a distribution of relief items for the displaced in AlSaidya, Baghdad. CC BY-NC-ND/ICRC/Tareq Hassoon

"The ongoing cycle of violence, which contravenes international humanitarian law and has resulted in the continued loss of civilian lives and the destruction of property essential for survival, remains a matter of serious concern for the ICRC," said Mr Youssef. "We managed to send staff and relief items to places such as Mosul, Fallujah and Hawijah to help civilians in those areas. We would like the parties concerned to give us more extensive access to continue our life-saving activities."

The current conflict has had a serious effect on health-care facilities in violence-stricken areas. A number of the facilities have come under attack and suffer from chronic shortages of medicines and supplies. With water, electricity and even medical staff in short supply, the level of service for the injured and the sick has eroded. "Everyone is entitled to impartial health care. The wounded and the sick must be cared for without any discrimination," said Mr Youssef. "Health-care facilities and staff must be protected from attacks. They must be allowed to function." 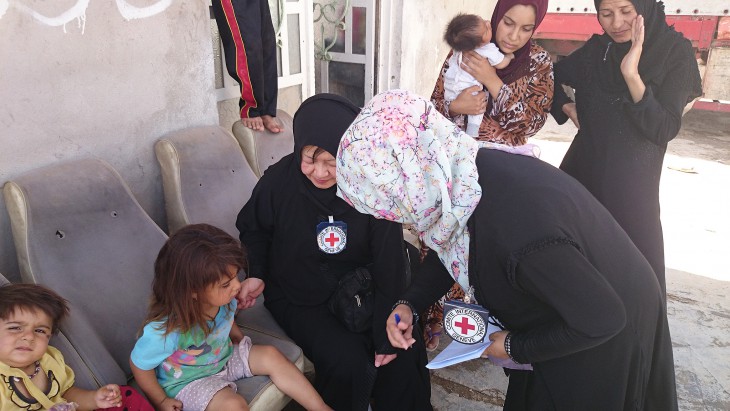 The ICRC, working in a strictly neutral and impartial manner, and seeking dialogue with everyone concerned by the conflict (government authorities, communities, tribal and religious leaders, etc.), has succeeded in distributing medicines, surgical instruments, bandages, intravenous fluids and other items to 67 health-care facilities in nine provinces. People in Basrah, Daquq, Dibis, Erbil, Fallujah, Hawijah, Khanaqin, Makhmour, Mosul, Najaf, Ramadi, Sinjar, Tallafar, Tooz and elsewhere have benefited from these life-saving supplies, which are sufficient to cover the needs of over 283,000 people for extended periods. Additionally, the ICRC physical rehabilitation centre in Erbil and eight other ICRC-supported centres served nearly 30,000 disabled people in 2014.

Making clean drinking water more widely available is one of the ICRC's priorities in Iraq. Since the beginning of the year, the organization has installed new water facilities and upgraded existing ones for host communities while also delivering water by truck and installing additional storage and distribution points for displaced people. These improvements have brought clean drinking water to almost 1.4 million people – almost 265,000 of them displaced – in 12 provinces. People in violence-affected areas such as Abu Ghrayb, Fallujah, Hamdaniyah, Heet, Hawijah, Kirkuk, Mosul, Ramadi, Samara, Sinjar, Tikrit, Tilkaif, Talafar were among those who benefited. In addition, the ICRC trained more than 125 technicians to operate water pumping facilities. 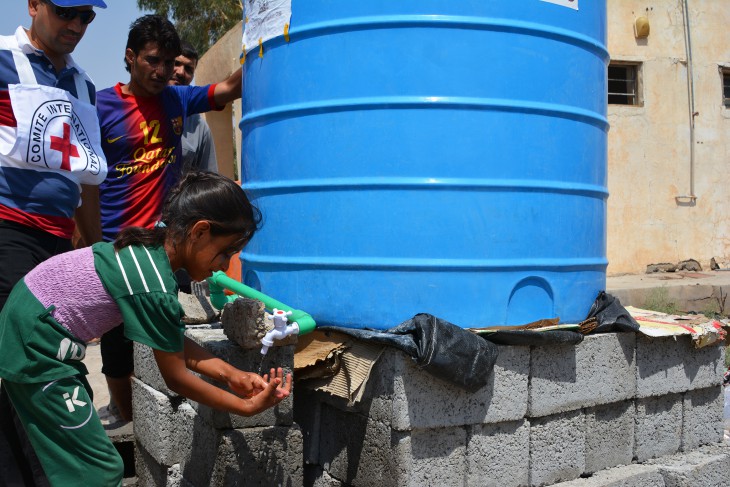 A water tank was installed by the ICRC to provide clean water to the displaced in Khanaqin, Diyala. CC BY-NC-ND/ICRC/Saleh Dabbakeh

"Water facilities have been destroyed as a result of fighting, making the lives of civilians more difficult," said Luc Brondel, an ICRC water engineer based in Iraq. "Because water is essential for human life, it is imperative that it be protected by parties to the conflict." Whenever possible, the ICRC has repaired water resources destroyed by the fighting.

Striving to ensure that detainees are treated with dignity

The ICRC continues to visit places of detention under the authority of the Iraqi national government and the regional government in Kurdistan. The purpose of the visits is to improve conditions of detention, help detainees establish and maintain contact with their families, and provide them with hygiene products and other necessary items. Meanwhile, by means of confidential dialogue with the authorities, the ICRC strives to ensure that detainees are treated in a dignified manner. It also monitors the condition of foreign nationals detained in Iraq and of detainees who have been moved to other locations on account of security concerns.

Since the beginning of the year, the ICRC has: 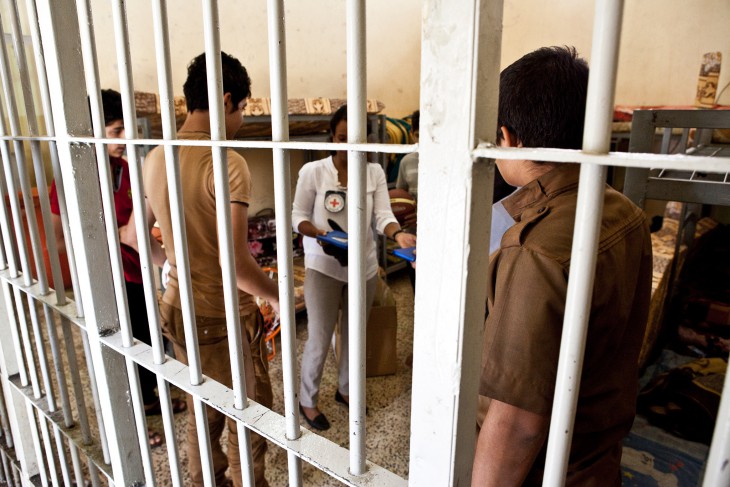 Committed to resolve the issue of missing persons

Tens of thousands of people remain missing in Iraq as a result of past armed conflicts, and the current violence is sadly adding to those numbers. The ICRC chairs the meetings of the committees responsible for accounting for people who went missing in connection with the 1980-1988 Iran-Iraq War and the 1990-1991 Gulf War. The aim is to shed light on what happened, through high-level meetings with the governments concerned, in order to relieve the suffering of the families, who still do not know what became of their missing loved ones.

Since the beginning of the year, the ICRC has facilitated three joint Iraqi-Iranian missions in the south of Iraq, where the remains of 338 people were recovered. Subsequently, in three handover ceremonies, the remains of 210 Iranians and 19 Iraqis were repatriated to their respective countries. In addition, by signing a memorandum of understanding with Iraq's Medico-Legal Institute, the ICRC renewed its commitment to expanding the forensic capabilities of the institute by providing it with training and equipment.

The ICRC continues to support the Iraqi Red Crescent Society in its efforts to expand its capabilities. In particular, it has provided the society with 12 mini-trucks, cars and forklifts, and has helped it to equip its emergency operational centre with the latest information technology tools.