Kosovo: Workshop on IHL and Islamic Law in Pristina 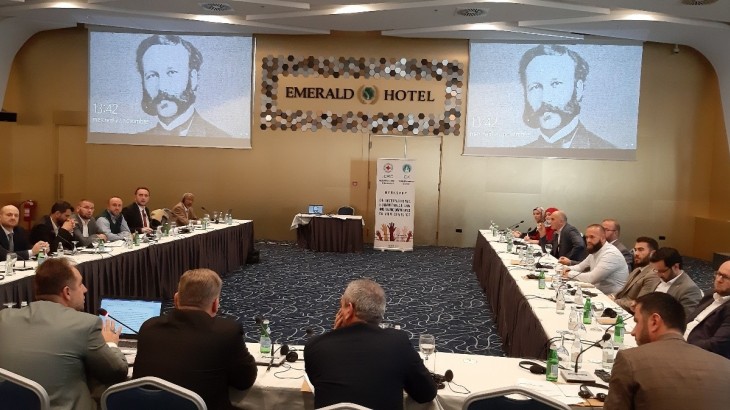 ICRC experts on IHL, along with Islamic Law experts from the Islamic Communities of the Western Balkan countries, discuss main principles, rules and commonalities between IHL and Islamic Law.

On 26 and 27 November 2019, the ICRC mission in Kosovo, in cooperation with the Islamic Community of Kosovo, organized a regional Workshop on International Humanitarian Law (IHL) and Islamic Law. The workshop was attended by leaders of the Islamic Community of Kosovo (ICK), including Grand Mufti Naim Tërnava, as well as senior representatives of Islamic communities from Macedonia and Albania.

During the two-day workshop, Islamic Law lecturers from Kosovo and Macedonia, along with ICRC experts on IHL, gave insightful presentations. While extrapolating on the evolution of IHL and Islamic Law through the ages, they also discussed commonalities and differences between the two. Professors and postgraduate students of the Faculty of Islamic Studies in Pristina, present at the workshop, also contributed to the discussion by sharing their views.

In an opening speech, the head of the ICRC mission in Kosovo, Agim Gashi, appreciated the ICK's readiness to always cooperate with the ICRC. "By Involving people from their own ranks and lecturers from the Islamic communities of the region, the ICK brings valuable input to the discussions and the presentations. The ICRC appreciates the ICK's contributions to a variety of topics, which are covered by IHL and Islamic Law. These topics continue to remain relevant in nowadays' contexts in Kosovo and beyond," he said.

The workshop was a follow-up to a session, held on 17 April 2019, to raise awareness of the ICRC's origin and Movement components. From the ICRC's legal sources to its main principles, the session served to spread knowledge of the ICRC's activities worldwide, especially in Kosovo. It also helped promote the ICRC's and the ICK's contribution to the issue of the missing and the welfare of their families in Kosovo.

The event served as a good opportunity to promote and exchange knowledge of IHL and Islamic Law and discuss ways to enhance the cooperation between the ICRC and the ICK in the future.