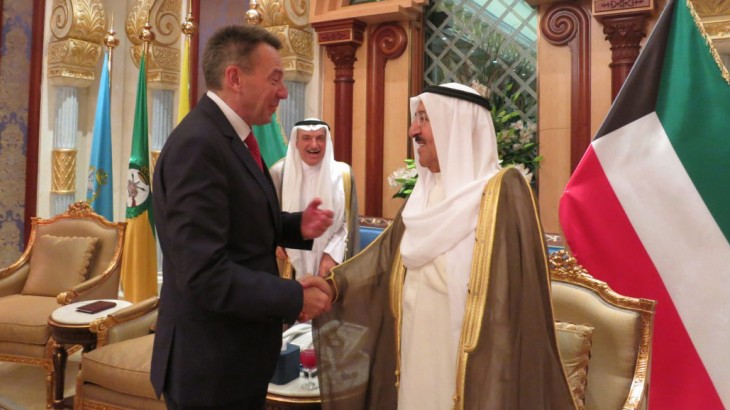 Peter Maurer, president of the ICRC, met with the Emir of Kuwait His Highness, Sheikh Sabah Al-Ahmad Al-Jaber Al-Sabah.

Kuwait (ICRC) – The president of the International Committee of the Red Cross (ICRC), Peter Maurer, has just completed a one-day official visit to Kuwait.

"This visit was an opportunity to thank the Emir and the government of Kuwait for their political, diplomatic, moral and financial support for the ICRC's humanitarian task", said Mr Maurer. "The humanitarian action is facing tremendous challenges in various parts of the world. We need a collective will and commitment of the international community in order to face these challenges and to respond to the humanitarian needs of the victims of armed conflicts and other situations of violence worldwide", added Mr. Maurer.

Mr. Maurer met also with the Speaker of Kuwait National assembly, H.E. Mr. Marzouq Al-Ghanem, in order to further discuss the regional situation and the ever increasing plight of the victims.

Besides, the ICRC president met with Dr. Hilal Al-Sayer, president of the Kuwait Red Crescent Society. They both reviewed the existing cooperation and discussed potential areas for development, in order to strengthen the strategic partnership between both institutions.