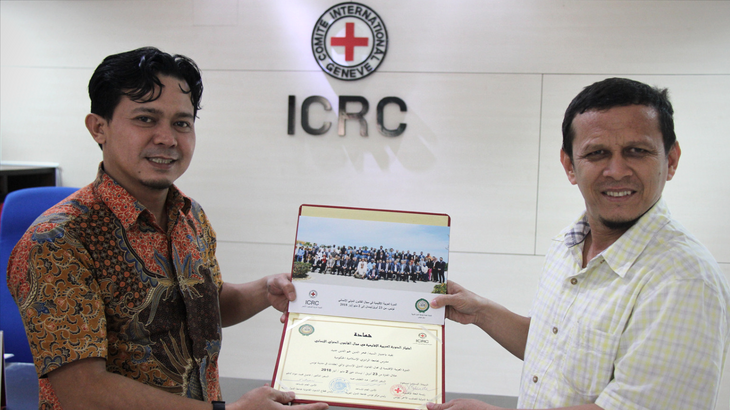 Prominent Indonesian Islamic scholar Sheikh Fakhruddin Lahmuddin, a lecturer at Universitas Islam Negeri (UIN), Ar-Raniry, Banda Aceh, was among the 80 participants at the IHL Regional Arabic Course co-organized by the International Committee of the Red Cross (ICRC) in Tunis recently. Held from 23 April till 2 May 2018, the event brought together leading scholars, government representatives and religious leaders from the Middle East, Asia and Africa.

Sheikh Fakhruddin was accompanied by three other representatives from South-East Asia – head of the Ulama Council of the Philippines, Sulu, Sheikh Zai-Ulhaq Biruwa, president of United Imam of the Philippines in Marawi Saad Ibrahim Amate and a lecturer from the Universiti Utara Malaysia (UUM), Mr Makueta Hayiwaesorhoh.

The 10-day course, jointly organized with the League of Arab States, was intended for government officials, Islamic scholars and professors of law. This is the only Arabic-language forum that offers in-depth study of international humanitarian law (IHL) as well as examination of issues related to human rights and the International Red Cross and Red Crescent Movement.

“It’s very important to see the representation of senior Islamic scholars from South-East Asia in this regional forum,” said Andrew Bartles-Smith, the ICRC’s regional advisor for humanitarian affairs. “South-East Asia has emerged as an important hub of Islamic study and is home to many influential scholars. It’s important that the Asian perspectives on IHL, Islam and humanitarian affairs were heard at the international level.”

The IHL courses were first organized in 2004 based on a resolution issued by the League of Arab States to raise awareness on IHL rules and principles among the Arab governments.

The topics discussed over the 10-day course included means and methods of warfare, persons and places protected under IHL, mechanisms for ensuring compliance with IHL and its implementation at national level, apart from IHL and Sharia.

“It’s the first time that I’ve attended a course on IHL so it was something new and extremely valuable for me,” said Sheikh Fakhruddin, who comes from the province of Aceh, a region that experienced prolonged armed conflict between 1976 and 2005.

Since the late 1990s, the ICRC has been developing a working relationship with Islamic circles, academics and civil society in countries such as Pakistan, Afghanistan, Iran, Jordan and more recently, Indonesia. Amongst these initiatives in Indonesia is the Akhlak Kemanusiaan course, a modified version of the ICRC’s Exploring Humanitarian Law (EHL), a teaching resource pack for teachers to introduce students between ages 13 and 18 to the basic rules of international humanitarian law.

The ICRC also regularly organizes workshops on IHL and Siyar (the Islamic law of armed conflict) across Asia to explore possible points of convergence between the two bodies of law.

Learn more about the ICRC's work with religious circles