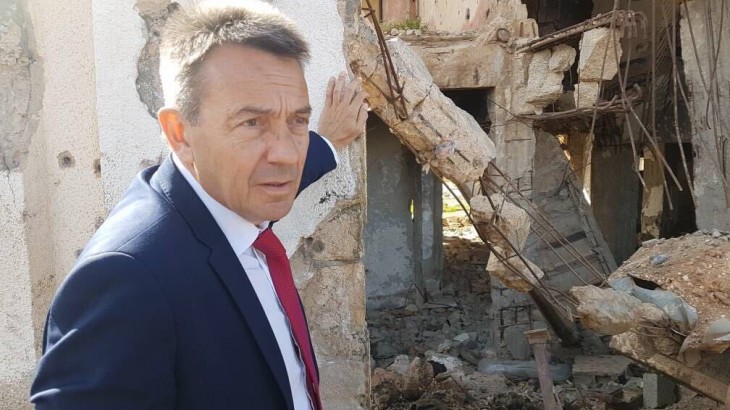 ICRC President Peter Maurer during his visit to Libya. ICRC

Geneva/Munich (ICRC) – As Libya enters its eighth year of conflict, the humanitarian situation of the population is relentlessly deteriorating amid persistent armed conflict, violence and insecurity, the President of the International Committee of the Red Cross (ICRC) said on Friday after a three-day visit to the country.

The ICRC has recently scaled up its operations in Libya, which has been engulfed in economic chaos, general lawlessness and armed groups vying for power since the revolution in 2011.

The threat of ongoing conflict prevents many from returning to their homes and as a result Libya suffers from one of the highest per capita displacement levels in Africa.

"It's hard to fathom how many people are affected by conflict in Libya," the ICRC President Peter Maurer said after visiting Tripoli, Tobruk and Benghazi to assess the humanitarian situation and speak with high-level Libyan authorities. "Urban violence and vast displacement have been an everyday reality for Libyans since 2011, while migrants - desperate to reach Europe - are often trapped and abused there".

Tragic numbers underscore the perilous position of conflict-affected people there - residents and migrants included: 1.3 million need humanitarian assistance. An estimated 200,000 people (3% of the population) are internally displaced, many of them having lost their homes because of air strikes and the use of heavy artillery in populated areas. Hospitals struggle with chronic shortages of medical supplies; 20% are not even functional. Criminal activities including kidnappings, smuggling, people trafficking and ransoming are rising all over the country.

"It is clear that immediate and determined efforts are needed to relieve the suffering in Libya. Leadership at an international level is sorely needed. A head in the sand approach will only create more suffering for the future," said Mr Maurer following a series of constructive meetings with the Libyan authorities.

"We plan to step up considerably our assistance and remain committed to act as a neutral intermediary between all parties in order to help those directly affected by the armed conflict and violence. We also recognize that our humanitarian response needs to adapt to support the strengths of a highly educated population in this middle income country."

Libya's turmoil has created fertile ground for migrants to be exploited. Many migrants detained in Libya suffer from inhumane treatment and conditions, a situation that must be addressed. Thousands of migrants languish in immigration centres.

With the current political instability and security vacuum in the country, the ICRC is concerned that detention places do not fulfil the basic structural requirements and material conditions to ensure the humane and dignified treatment of detained migrants.

"We strongly encourage policy makers to support Libya in the development of migration policies exploring alternatives to detention and fully incorporating measures for the protection of vulnerable migrants," said Mr Maurer.

The ICRC recognizes that States have legitimate economic, social cohesion and security concerns and have a right to regulate migration. However, under international law migrants must not be trapped or returned to country where they could be harmed. States must review individual cases before refusing admission or sending migrants back.

The number of migrants from Africa who have died en route is critically under-reported. The ICRC encourages authorities to take steps towards clarifying the fate of the missing migrants through strengthening their forensics and justice departments and by cooperating with the ICRC.

"Europe has a role to play in ensuring human dignity in migration policies and actions," Mr Maurer said. "The marker for success of Europe's immigration policies must not be how many people were stopped from going to Europe. Instead, the gauge of success must be how were migrants treated? What laws were followed? Was human dignity respected?"

The ICRC has been present in Libya uninterruptedly since 2011, working side by side with the Libyan Red Crescent to the benefit of all Libyans throughout the country, in a strictly neutral and impartial way. Red Crescent volunteers often work day and night despite the dangers and challenges, to alleviate the suffering of those in need. This year, the organization plans to increase its emergency assistance to those affected by the conflict, including distributions of food and essential household items; more medical supplies and support for health facilities; and putting separated family members back in touch, in particular for detained migrants. We also hope to have access to detention centres throughout the country.