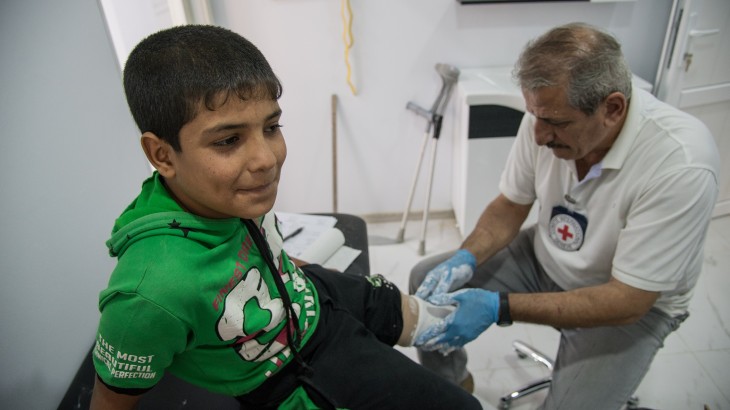 Mosul (ICRC): A new physical rehabilitation centre was opened in Mosul on 14 October 2018. Constructed by the International Committee of the Red Cross (ICRC), the Ninawa Physical Rehabilitation Centre (Ninawa PRC) was handed over to the Ninawa Directorate of Health, Ministry of Health.

The rehabilitation centre, which took four months to build, will treat patients with disabilities and provide specialist prosthetic, orthotic and physiotherapy services.

“Due to the massive destruction of infrastructure and lack of services in Ninawa province, amputees requiring prosthetic limbs had to travel for several hours to Erbil or Sulaymaniyah to receive services,” said Therese Powell, the ICRC's physical rehabilitation programme manager in Iraq. "We know that there are hundreds of people still waiting to access these much-needed services."

"Before the opening of this centre, I had to take my nine-year-old disabled son to far away Erbil. That meant spending several days away from home not to mention crossing check-points and the transportation costs. Now we can come back home the same day," explained Muna Mahmood Hamid.

"The centre will support some 4,500 amputees in Ninawa governorate and will prevent the burden of travel and financial effects on the patients," specified Dr. Layth Al-Hajjar, manager of the Ninawa PRC.

"The services provided are crucial for the rehabilitation and social integration of people with disabilities to help them regain their independence, ability to work and to provide for their families," said Katharina Ritz, head of the ICRC's Iraq delegation.