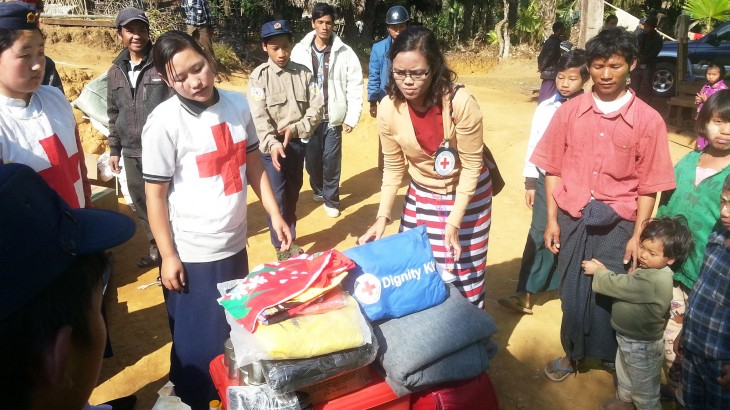 The Myanmar Red Cross and ICRC distribute household items and cold weather clothing to displaced families at a camp for the displaced in Putao, northern Kachin state, Myanmar. CC BY-NC-ND/ICRC

Three unrelated women recently joined hands in support of fighting-affected families in Putao, in the far north of Myanmar's Kachin state. The way these women from the Red Cross Movement lent support to displaced women and their families typifies the spirit of women humanitarian workers the world over.

The impact of armed conflict, fighting and violence is borne most heavily by those least able to cope with it: the elderly, women and children. In situations of armed conflict, men of 'fighting age' are often drafted to fight, or detained as suspects. The result is that many families, already vulnerable due to conflict, are left without a breadwinner – forcing women to cope on their own with their children, and sometimes with dependent elderly parents.

Physical abuse and sexual violence are also prominent in these circumstances – both factors which increase the vulnerability of women in conflict-affected areas. Very often, women are left powerless to deal with such situations, as reflected in the following stories.

After five years as a programme officer with the Myanmar Red Cross Society (MRCS) and two years working for another humanitarian charity, Aye Thanter Tun joined the ICRC in 2013. Aye explained how, in Putao, one family came to be displaced: "During fighting in their village the woman's father had a stroke and could not be moved. When the fighting intensified and they were told to abandon their village. They left without him.

"It took six days to reach the refugee camp. Along the way her husband became lost when they encountered fighting and they were separated. She does not know if her husband is dead or alive. After she arrived at the camp she heard that her father had died. Because her family has no breadwinner, she has to work on programmes like cash-for-work or laying stones on roads. The displaced woman said she has two children and that she struggles for them, wanting them to have an education and health care."

Since becoming a MRCS volunteer on new year's day in 1981, San San Aye has worked in the Ayerawaddy region after it was hit by cyclone Nargis, was a member of a township women's affairs committee, led a township committee for prevention of violence against women, and was a member of a committee assisting disabled people and disaster risk reduction.

San San Aye recalls: "In August 2011, armed groups began fighting near my town. They blocked the road about nine miles away and during a fight, six civilians and one policeman were killed. A Red Cross team displaying the emblem of the Red Cross was despatched to recover the dead. We were very worried for their safety."

Born and educated in agricultural engineering in Pamplona, Spain, Esther Lopez has worked on humanitarian projects in Mali, Peru, Armenia, Liberia and other trouble spots since 1997. Esther and her family now live in Yangon, where she coordinates economic security assistance programmes for the ICRC. In this capacity she works closely with ICRC resident staff and MRCS volunteers.

While never displaced herself, Esther has witnessed first-hand the plight of mothers who, without their husbands, have fled fighting, taking their young children with them to seek safety. "This is the sad reality of conflict," she says. "It is terrible to think of the impact of war on families. I remember one woman who walked almost 70 kilometres with her children, including carrying a young baby on her back. Her face showed how close to her last breath she was as she arrived at a displaced persons camp. As a mother myself, I do not want to imagine how terrible such a burden must be. These events make our small problems seem insignificant."

Making a difference for women affected by violence

What have these three women in common? Esther, San San Aye and Aye Thanter Tun came together in Putao, representing the Myanmar Red Cross and the ICRC, to jointly distribute assistance to some of those who have suffered the effects of fighting in Kachin state.

Many women, whose bread-winning husbands have gone missing or been killed in armed conflict, are forced for the sake of their families to cope with violence, displacement, physical and sexual abuse and the loss of family members. In many instances it is women who then respond, through humanitarian action, to assist those in need.

From the comfort of our homes on International Women's Day on 8 March 2015, we need to remember those who are affected by armed conflict and situations of violence. We need also to recognize that a stand must be taken to minimize the impact of fighting and ill-treatment on civilians – and especially on the most vulnerable. At the same time we should be grateful, and proud, of the work done to address these problems by strong and determined women from within our communities.