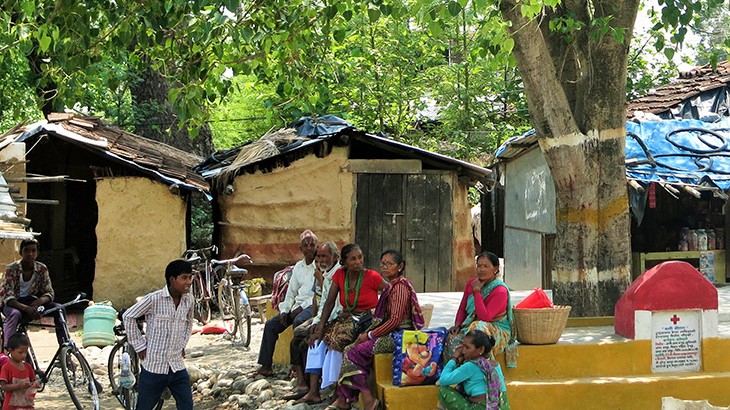 The families of missing persons at the Chautara, a monument built in the memory of their missing loved ones, wait for a bus to go home. CC BY-NC-ND / ICRC / Binod Kafle

Most parents tend to remember dates associated with their children - the date of birth, the first time the child spoke, took the first step, smiled or laughed, the first day of school, the date of graduation, the wedding day. For one grieving mother, it's the 20th of November 2002 – the day when she last saw her son.

Fathers and mothers whose sons and daughters have gone missing, wives whose husbands are still unaccounted for, and a young son still searching for the whereabouts of his father: they all gathered at the Chautara – a commemoration monument – in Nepal, to share the grief of losing their loved ones.

In the morning of Sunday 21st of June, despite the monsoon rain, families of missing persons, government and non-governmental organizations, local journalists, and ICRC and Red Cross staff came together in Kanchanpur for a ceremony to honour missing loved ones. Attendees gathered in front of the Chautara and lit candles in loving memory of their missing relatives.

In the crowd was Dhan Bahadur Chaudhary, a father whose teenage son went missing. Quiet and calm, Chaudhary says, "Our sons have been missing for a long time. We built this Chautara in their memory, wishing them well, wherever they are."

But some others weren't as calm as Dhan Bahadur. Laxmi Chaudhary feels that the families of missing persons have been neglected. But she is thankful for Hateymalo, a psychosocial support programme, as it has given her a way to share her pain with people in similar situations, and to not feel so alone.

Launched by the ICRC in 2010, Hateymalo aims to help families of missing persons find a way to manage their grief.

"There is no similar pattern or way to manage the ambiguity of loss that families of missing persons feel," says Yubaraj Adhikari, responsible for mental health and psychosocial support programmes at the ICRC in Nepal. "The process of commemoration helps families to move forward through the complicated grieving process. Nepali society still believes in some sense of spiritual control over their lives, and the commemorative process is a cultural way to help mitigate the impact of uncertainty due to the disappearances of their loved ones."

The decision on what to build to commemorate loved ones rests with the families of missing persons. Geeta Khatri, the Hateymalo programme team leader in Kailali and Kanchanpur, explains, "We do not interfere with the decision. The families hold group meetings where all options are weighed and together, they come to an agreement. All we do is give our input when asked and help them once they have made a decision."

The Chautara, one of the commemoration sites built as part of Hateymalo, now stands along the highway at Bani, Krishnapur, in the far-western district of Kanchanpur. The site is a place of remembrance for many families. And for those who take the time to read the engraved message, they would know that it was created in loving memory of people who have been missing since the days of a decade long armed-conflict in Nepal (1996 – 2006), and remain unaccounted for.

In collaboration with the Nepal Red Cross Society and number of local NGOs, Hateymalo provides psychological, economical, legal and social-cultural support to families of missing persons. So far, Hateymalo has helped more than 1,300 families in 43 districts across Nepal.