Nepal: Families of missing persons still searching for loved ones 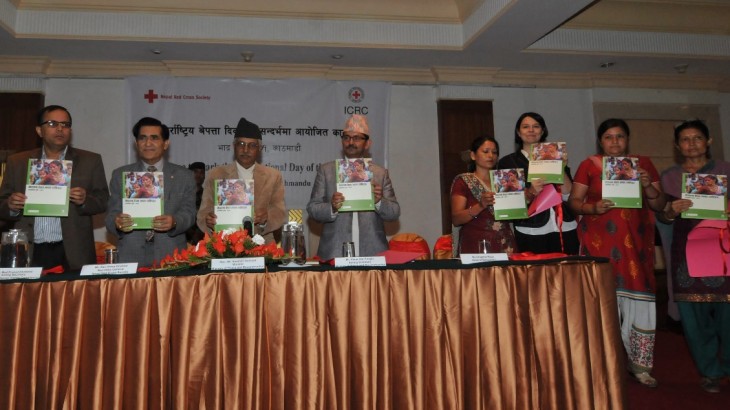 The Minister for Peace and Reconstruction, families of missing persons and other distinguished guests launch the publication "Missing Persons in Nepal: Updated list 2014" at a function in Kathmandu, 1 September 2014

The families of people who went missing in connection with the conflict in Nepal from 1996 to 2006 cling to shreds of hope. They want to believe that their missing relatives will return one day. By supporting one another, they are able to better cope with their loss.

Surya Mali (35) is a man with a heavy heart. Although he goes about his life with a smile on his face, his pleasant demeanour belies the anguish within. Since 2002, he has been on an unfruitful search for his elder brother and cousins, who went missing during the height of the conflict in Nepal. "I did everything I could to find my brother and my two cousins, but to no avail," says Mali, a resident of Thecho in Lalitpur, one of the three districts in the valley of Kathmandu.

There are thousands like Mali in Nepal, still suffering the uncertainty of not knowing what happened to family members who went missing during the country's decade-long conflict. It has been eight years since the Comprehensive Peace Accord was signed in Nepal, but families of many of the disappeared still do not know what happened to their loved ones. According to the ICRC, 3,777 individuals went missing during the internal armed conflict. Of them, 1,347 – about one in three – are still missing.

To help the families of these missing persons, the ICRC launched a psychosocial support programme in 2010 called "Hateymalo" (join hands together). The ICRC and the Nepal Red Cross Society work with national non-governmental organizations to provide psychological, economic, legal, administrative and socio-cultural support for relatives of missing persons. The Hateymalo programme is or was operational in 43 districts.

On 1 September 2014, partners within the International Red Cross and Red Crescent Movement organized an event in Kathmandu to mark the International Day of the Disappeared – 30 August – which brought together around 100 families of missing persons from three districts – Kathmandu, Lalitpur and Bhaktapur. Mali was one of the participants. A publication was unveiled on the occasion entitled Missing persons in Nepal: Updated list 2014 – the seventh edition of the list first published in 2007. The ICRC and the Nepal Red Cross also held other events in different parts of the country on that day.

Although it has been over a decade since these people went missing, their families are still hoping to find their loved ones. Baikuntha Shrestha, another participant at the 1 September programme and a resident of Naikap in Kathmandu, has been searching for his daughter for nine long years. He believes she was detained by the authorities. Her family never saw her again and have been unable to obtain any information about her whereabouts despite numerous efforts. The septuagenarian is hoping against hope that his daughter will come back home one day.

Field assessments conducted by the ICRC and the Nepal Red Cross have repeatedly shown that the primary need of the families is to know what happened to their missing loved ones, even years after the events took place. These families regularly organize social and cultural gatherings as part of their efforts to find out what happened to missing relatives and to deal with their loss. They have formed support groups and hold ceremonies in memory of their loved ones. They also raise funds to build chautaris and pratichhalaya (resting places) in memory of their relatives. The ICRC Hateymalo programme supports these efforts.

Mali, in one such initiative, is trying to collect funds for the construction of a memorial park for missing persons in his locality. Fiercely dedicated to his mother and his aunt (the mother of his missing cousins), Mali is determined to bring solace to families like his and is fighting against all odds to make the park a reality. "The loved ones we have lost are irreplaceable, and the pain will never go, but life has to go on. By coming together and supporting one another, families of missing persons can better cope with their loss," he says.