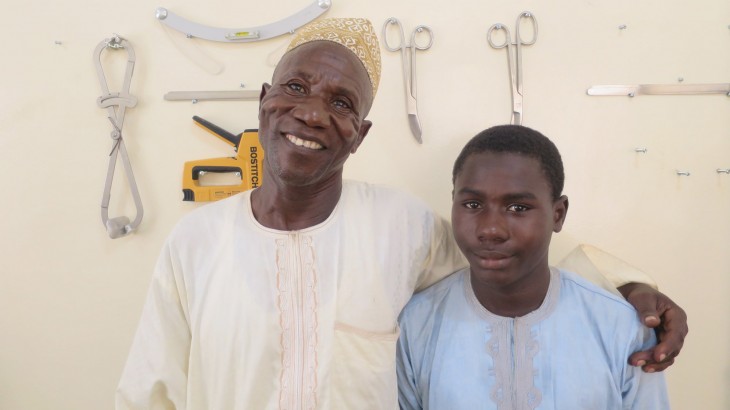 Musa’s father is hopeful about his son’s future, especially since he can now walk with his new limb. CC BY-NC-ND / ICRC / Adewole Ajao

Musa was a thriving 14-year-old student with a passion for football when a boy walked into his school with a bag - despite the fact bags were banned.

"We kept asking him why he was carrying a bag," Musa recalls. "Then we heard a beeping sound, but we thought it was his phone"

The bag was concealing a bomb. The ensuing blast was huge, killing two dozen students and injuring more than 40.

Alhaji Musa, Musa's father, who lived in the staff quarters near the school, heard the bomb go off.

"I ran to the school and saw dead bodies everywhere and everyone running around confused. I started looking for my son," he says, recalling the November 2014 attack. "I eventually found Musa in the emergency ward of Potiskum General Hospital."

Musa's left leg had been blown off by the blast. The football-loving teen faced a grueling recovery.

A ray of hope

Three days after the blast, Musa's family learned about an International Committee of the Red Cross (ICRC) program to fit victims of violence with a prosthesis free of charge.

Musa was fitted with a prosthetic limb three months later at the National Orthopedic Hospital, Dala-Kano in Kano. The youngest person in the program at the time, Musa was trained by the orthopedic staff on how to use his new limb. 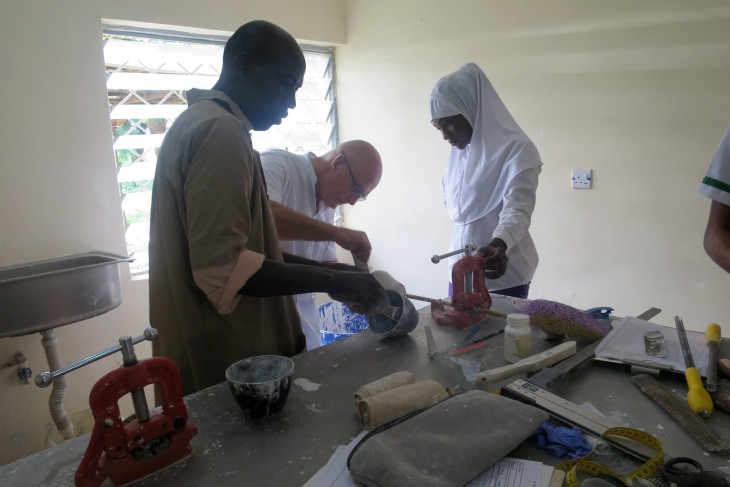 The orthopedic team attends to four to five beneficiaries a week on the average. CC BY-NC-ND / ICRC / Adewole Ajao

"He found it very easy to cope," his father says. "After we were discharged, he used a stick for a while but soon dropped it and began to walk around unaided."

Jacques Forget, the ICRC ortho-prosthetist who oversees the project in Dala-Kano, says more than 180 people have been fitted with prostheses since August 2016.

"We work only with amputees referred from ICRC health field officers in Adamawa, Borno and Damaturu. This way, we are able to control what would otherwise be a huge demand for fittings," Forget said.

Forget currently works with six National Orthopedic Hospital staff and one ICRC staff. He said the team is proficient but he wants to improve their skills.

"Improving the technical know-how of the staff for me involves not just training them on how to fabricate and fit the amputees, but also helping them to see the patients as 'beneficiaries,' a mindset that personalizes their approach to the victims," Forget said.

"I often repeat them to treat the amputees as if they were their father, mother or brother."

"He is young and he still feels the trauma sometimes. He gets angry sometimes but other times he is friendly with everyone," Musa's father Alhaji Musa says. "I got a three-wheeled bike for him and he rides it very well."

Alhaji Musa Musa's father expresses deep appreciation for the assistance his son has received. ICRC plans to help more victims of violence by opening a prosthetic and ortho centre in Maiduguri, Borno state, the epicenter of the armed conflict in north east Nigeria.

While playing football is more difficult now, Musa stays connected to the sport by fervently supporting the Barcelona team.

"My favorite footballers are Messi and Neymar," he says shyly.