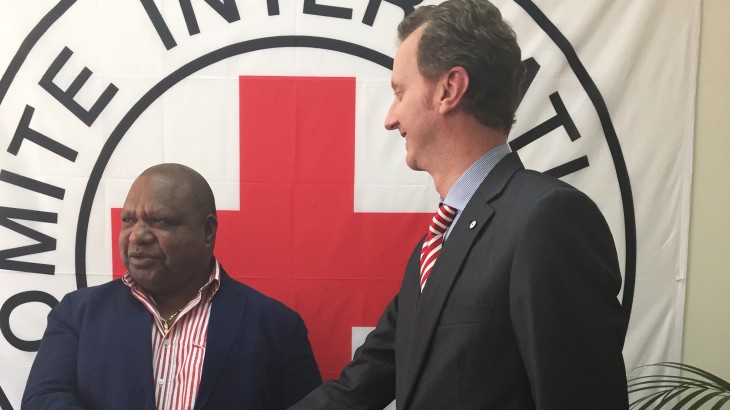 The health post, to be located in the remote village of Kalolo in Kagua Erave District, will provide primary health care for over 20,000 people affected by tribal violence in the area.

Currently there are no health facilities in Kalolo or the surrounding communities. The closest one is 20 kilometres away and, owing to poor road conditions, can only be reached after four hours of walking.

According to signatory Joseph Turian, CEO of the Provincial Health Authority, 17 of the 24 health posts in Kagua Erave District have ceased to function in the past 15 years, many of them deliberately targeted by fighting. In times of tribal fights, health care is often the first public service to be lost and the last to be restored. In Kalolo and surrounding communities, the estimated 20,000 inhabitants have gone without a community health post for three years.

"Access to health care is under attack in the Highlands, and safeguarding it requires a determined effort from national and provincial authorities," said signatory Gauthier Lefèvre, head of the ICRC's mission in Papua New Guinea.

The ICRC, working in close partnership with the Southern Highlands Provincial Health Authority, will fund construction of the health post, which is expected to be opened within four months. The project also enjoys strong support from local communities. Residents of Kalolo have chosen to call the health post Yakisu, which borrows syllables from the names of surrounding areas Yambaki, Yakira Creek and Suku Valley.

"Bringing back healthcare services to remote, violence-prone areas is one of the provincial government's top priorities," said signatory and Governor of Southern Highlands Province, the Honourable Mr William Powi. "The ICRC is helping us to do this, but it is up to us to provide the staff and manage the health post effectively for the future."

This initiative represents a further step in the ICRC's efforts to promote access to health care in the region, after the opening of Uma community health post, also in Kagua Erave District, in 2014. The ICRC recently conducted first-aid training courses in Kalolo and Batri for thirty participants. In 2015, it is planning to expand its activities to Hela and Enga Provinces as well.

The ICRC is a neutral, impartial and independent humanitarian organization whose mandate is to protect and assist people affected by armed conflict and other situations of violence. In Papua New Guinea, it has offices in Port Moresby, Mount Hagen and Arawa.