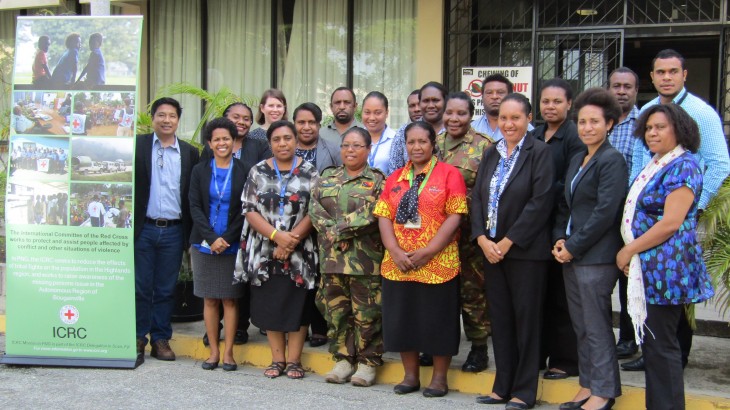 Port Moresby (ICRC) - The ICRC this week conducted a training session on International Humanitarian Law (IHL) for officials of the PNG Government, at the invitation of the recently established National IHL Committee.

"This training session is the first of its kind in PNG and demonstrates the authorities' continued commitment to strengthening the implementation of IHL nationally" said ICRC Pacific Regional Legal Advisor Netta Goussac, "The purpose of the training was to strengthen participants' understanding of how IHL works, and how it promotes justice in situations of armed conflict. Understanding these rules is important at all times, even in times of peace."

Held at the Department of Justice and Attorney-General (DJAG), the two-day session included lectures and practical exercises, and examined why it is important to place humanitarian restraints on the waging of war, how armed conflicts are classified, and what rules must be followed by parties to conflict.

A total of 18 officials participated, representing government agencies that hold responsibility for implementing IHL, including DJAG, the Department of Foreign Affairs, the Department of Prime Minister and National Executive Council, and the PNG Defense Force.

"Over the last two days, participants learned new tools that will help them to do their daily work such as drafting laws to give effect to IHL treaties, advising the government on in relation to resolutions of international fora or reacting to alleged IHL violations by other countries" Ms Goussac, the main facilitator of the training, said.

"It is important for the members of the PNG National IHL Committee and stakeholders to apply the knowledge of IHL in their respective roles in the government. This training is very timely because the National IHL Committee recently commenced its activities this year," said Roselyn Gwaibo, DJAG Deputy Secretary, who also attended the workshop.

IHL is a set of rules that limits the effects of armed conflict, restricts the types of weapons and methods used during conflicts and protects civilians and those no longer participating directly in the hostilities. The ICRC serves as the guardian of the IHL, the foundations of which are the Geneva Conventions of 1949 and its two additional protocols.