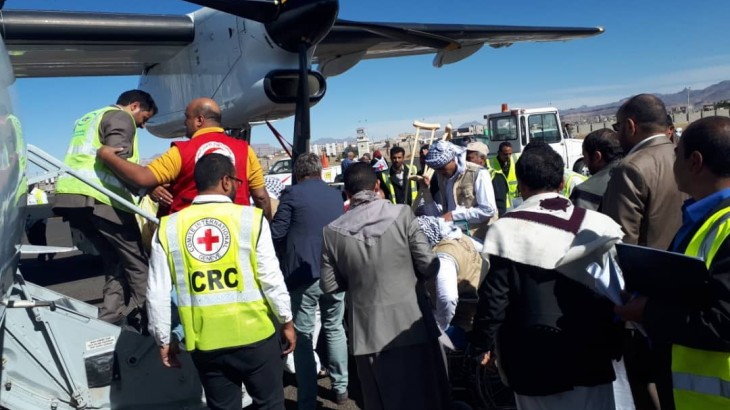 Photo from a previous release of 128 detainees repatriated to Yemen from Saudi Arabia in 2019.

Delegates representing the parties to the conflict in Yemen agreed on a detailed plan to complete the first official large-scale exchange of prisoners since the beginning of the conflict. This is a step towards the fulfillment of the parties’ commitment to the phased release of all conflict-related detainees according to the Stockholm Agreement. At the conclusion of a seven-day meeting today, Sunday, the parties decided to immediately begin with exchanging the lists for the upcoming release.

This is the third round of deliberations for the Supervisory Committee on the Implementation of the Prisoners’ Exchange Agreement since the Stockholm consultations in late 2018. The committee brings together delegations from the parties to the conflict, as well as representatives from the Arab Coalition. The committee is co-chaired by the Office of the Special Envoy of the Secretary-General for Yemen (OSESGY) and the International Committee of the Red Cross (ICRC).

“I urge the parties to move forward with the exchange they agreed on today with the utmost sense of urgency. Progress has been too slow on this front. The pain of the thousands awaiting reunion with their loved ones must end,” said Martin Griffiths, the UN Special Envoy for Yemen, “Today the parties showed us that even with the growing challenges on the ground, the confidence they have been building can still yield positive results.”

Mr. Griffiths further expressed his appreciation for the leadership of the parties for engaging in good faith negotiations to alleviate the suffering of the prisoners and their families. He also extended his gratitude for the Hashemite Kingdom of Jordan for hosting the meeting.

During the meeting, the parties renewed their commitment to facilitate the ability of all conflict-related prisoners and detainees to contact their families in accordance with international humanitarian law. The committee made plans to convene again in late March to discuss further exchanges. Plans were also made to convene the next meeting of the Sub-Committee on Dead Bodies and Human Remains within a month under the supervision of the ICRC.

“Today, despite ongoing clashes, we saw that the parties have found common humanitarian ground that will allow many detainees to return to their loved ones. This shows that only the parties themselves have it in their hands to bring about positive and lasting change. This is very encouraging and will hopefully lay the ground for further releases in the near future,” said Franz Rauchenstein, the head of the ICRC in Sana’a.