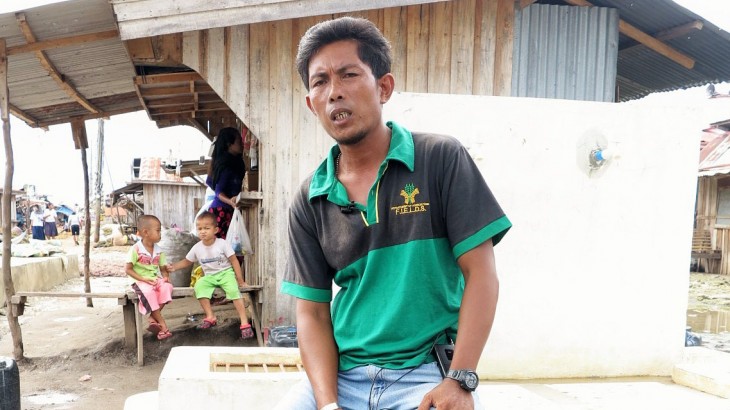 Alawi Asid, whose displaced family now lives in the transition site in Taluksangay, says the new tap stands around their community – just like the one behind him – relieve them from traveling to a remote area to fetch clean water. CC BY-NC-ND / ICRC / R. Ang

The project, supported by the International Committee of the Red Cross (ICRC) and the village and city authorities, is a long-term solution to the shortage of water in this barangay (village), which hosts about 900 people displaced by the armed fighting in 2013.

"Water was really scarce here in Taluksangay. It was difficult. Now our lives are better – people in the community no longer fight to get first in line. We can easily get water. We don't have to ride our banca (boat) anymore because the water source is near," said Alawi Asid, whose family was displaced from Layag-Layag.

Clean water started flowing from nine communal tap stands in September, reaching a total of 4,000 people in Taluksangay transition site, the nearby relocation site, and the host community. More people stand to benefit as the water system has the ability to cover additional localities in the barangay. Only half of the capacity of the water source has been used so far.

The project was built by 80 displaced people who were employed in a cash-for-work programme, with the ICRC providing materials and technical expertise. It was recently handed over to the Taluksangay Water and Sanitation Association (TAWASA), which was formed with ICRC support, and which will operate and maintain the project. To help the TAWASA sustain the project, the ICRC gave them tools, spare parts and office supplies.

"The ICRC went beyond the engineering works, focusing also on community organization and empowerment. The community took ownership of the project, and the system is self-sustaining, making it able to last for years to come," explained Marcel Goyeneche, who heads the ICRC office in Zamboanga.

Since the armed clashes in 2013, the ICRC has stayed on with the Philippine Red Cross to support thousands of displaced people in Zamboanga in speeding up their recovery and improving their health and living conditions.