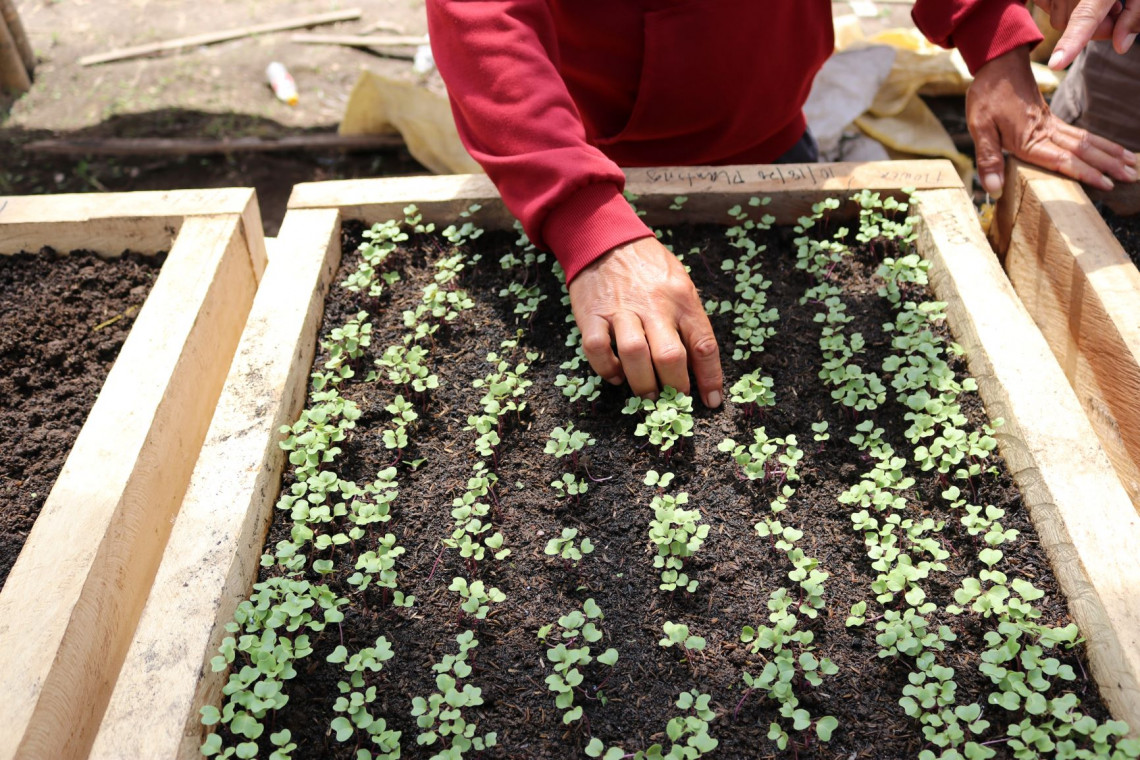 Farmers in Pagayawan, Lanao del Sur are learning biodynamic and organic farming in the hope of restarting their livelihoods.
Article 04 December 2020 Philippines

Basar buried his sun-scorched face in his hands and heaved a deep sigh as he recalled the displacement he and many others suffered in 2018 due to armed clashes between government forces and a non-state armed group in Pagayawan town, Lanao del Sur province. The farmer and his family fled and stayed with relatives in a neighboring town. 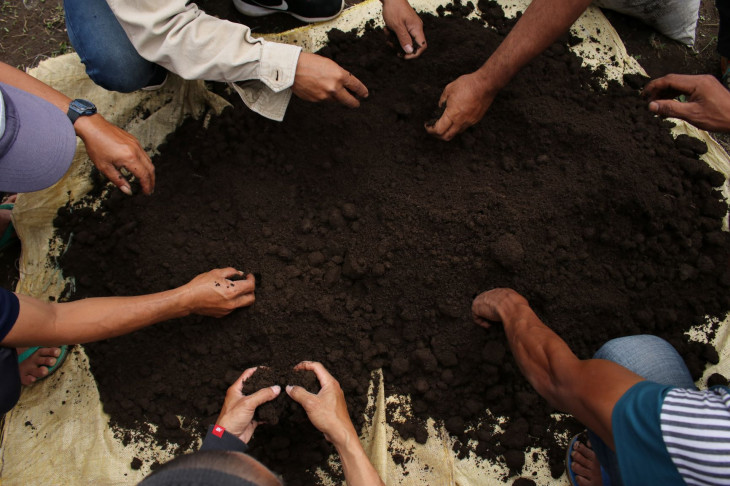 Farmer-representatives from six most-affected villages of Pagayawan in Lanao del Sur work together to prepare soil media—a mixture of soil, vermicast and carbonized rice hull where seedlings will be sown.

“Katatanodan aken pen giyoto a masa kiyapakapalagoy ami. Omani-isa na kikha-alek, labaw so mga babay go mga lokes rkami ago gyoto a minitaralo a kalek a miyagedam aken ko miyakadowa kiyapakapalagoy ami (“I remember the tremor that ran through the fleeing crowd, oh… the women and elderlies, and the intense fear that gripped me as we evacuated… twice),” said Basar, his eyes welling with tears.

The father-of-four said they were displaced again in March 2019. They returned home after several months of staying with relatives while other displaced community members stayed in evacuation centers. But the farmer barely had anything to return to.

Basar’s household items, livestock, and farm tools were all looted. The farmland where his livelihood heavily depended on was overgrown by bush and tufts of weed.

Restarting their livelihood became a struggle. In re-cultivating their lands, farmershad to borrow money from others at a whopping 20-percent interest rate. Nearly all displaced families relied on external assistance to meet their needs.

The International Committee of the Red Cross (ICRC), a humanitarian organization that strives to protect and assist victims of armed conflict, has been supporting the displaced residents of Pagayawan since 2018. After providing relief items and conditional cash grants in 2018 and 2019 respectively, the organization recently implemented a more sustainable approach to capacitate residents and allow them to stand on their own feet.

In coordination with the local government unit (LGU) of Pagayawan and Municipal Agriculture Office of Kauswagan in Lanao del Norte, the ICRC introduced “Bio-dynamic and Organic Farming,” a holistic ecological and ethical approach to farming, food and nutrition, to the residents.

Biodynamic farms are an integrated and interdependent organism inspired by the biodiversity of the natural ecosystem. This method aims to achieve food of high nutritional produce without the use of artificial fertilizers or synthetic chemicals and genetically modified organisms. 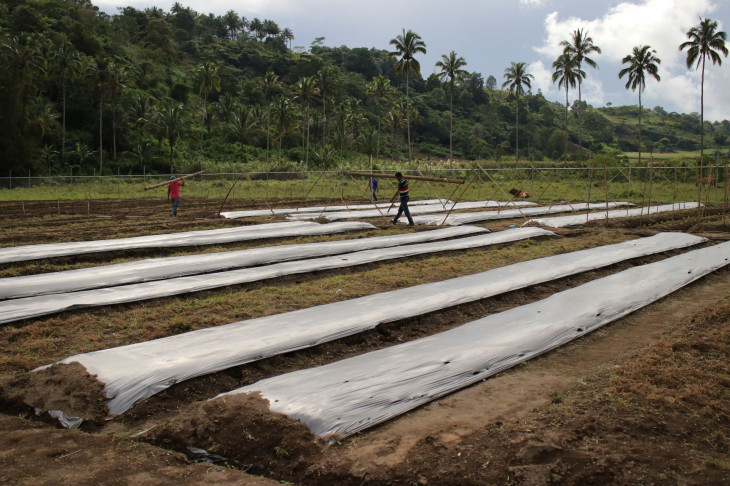 30 farmer-representatives and two members of the Pagayawan LGU are being trained on biodynamic and organic farming in its pilot implementation so they can cascade the method to their community members for replication. The demo farm is on an 8,112 sq. m. piece of land provided by the town mayor through usufruct agreement.

“Since Pagayawan is an agricultural area, the concept is to thoroughly train – in theory and application— 30 farmer-representatives from the six most-affected villages (barangay) and two members of the LGU so they can cascade their knowledge to the rest of the community,” shared Hussien Abubacar of ICRC’s economic security team.

“When residents replicate the method, the produce from the organic farm which can be harvested as early as two months will give them additional income and boost their food security while they wait for 5-6 months to harvest their main staple crops: rice and corn,” he added. 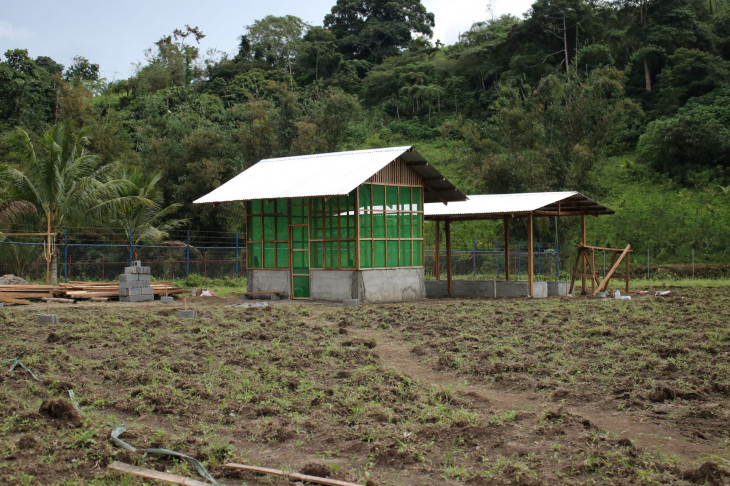 Agriculturist Amenah Taratingan, municipal cooperative specialist of MAO Kauswagan, said that the climate in Pagayawan was ideal for bio-dynamic and organic farming. “Through this project, we introduce farmers to new techniques that will utilize readily available resources. Compared to conventional farming, it’s more environmentally friendly, cheaper and healthier, too.”

The ICRC provided the seeds and tools as well as technical assistance while the resident-farmers remained entirely responsible for the management of the demo farm. The organization also conducted a cash-for-work project that involved 15 conflict-affected residents, for the construction of facilities for concoction or fermentation and vermi-composting.

Basar was one of the 30 farmers who underwent the five-day classroom training from November 9-13. They are now being taught using a “learning by doing” method by agriculturists from Kauswagan. They started planting seedlings—some of which are high-value commercial crops such as lettuce, broccoli, carrots and cabbage.

These days, they are focusing on taking care of their seedlings—which are starting to sprout—in the demo farm. The farmers are expected to graduate after the harvest season in four months. 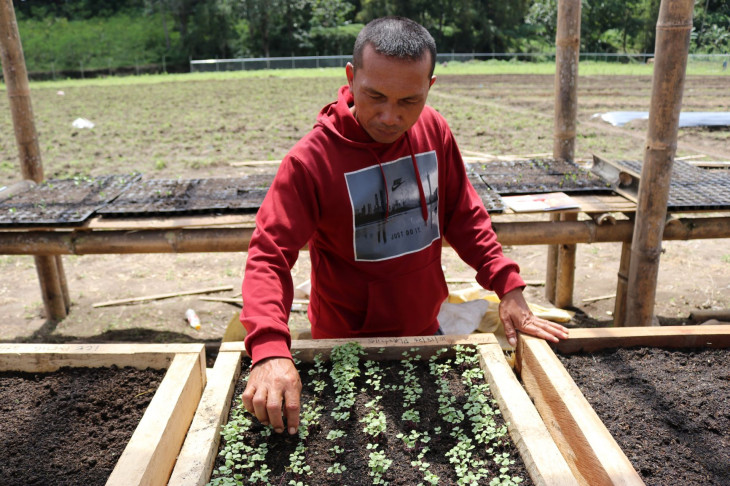 At the nursery where seedlings are nourished and hardened, Basar gleamed with excitement as he showed the broccoli seedlings which started to sprout.

Basar found consolation in taking part in this initiative. “Most of us here learned farming by experience. Through this project, we discovered a lot of new things,” he said, as a smile stretched across his face.

“We didn’t think this was possible, that the kitchen waste we usually throw away could be used as organic fertilizers. Understanding that the land we toil in is a living organism, the way we nurture and care for it will change. While we wait for six months to harvest our staple crops, we can benefit from the harvest in the organic farm. In two months, we can both sell and consume some of the produce,” he said.

The demo farm also keeps Basar and others busy. Not a day goes by without him visiting the farm. He feels a sense of calm in toiling the land and watching the plants grow. For him, the sprouting of seedlings signifies his “panginam” or renewed hope for a better tomorrow.

On top of it all, Basar said the project has cultivated camaraderie among residents. As the farmer-representatives were selected from six out of 18 villages, and they’re expected to eventually pass the method to the rest of the community, he sees the project as a tool to foster their “kaisa-isa,” a Meranao word for unity. 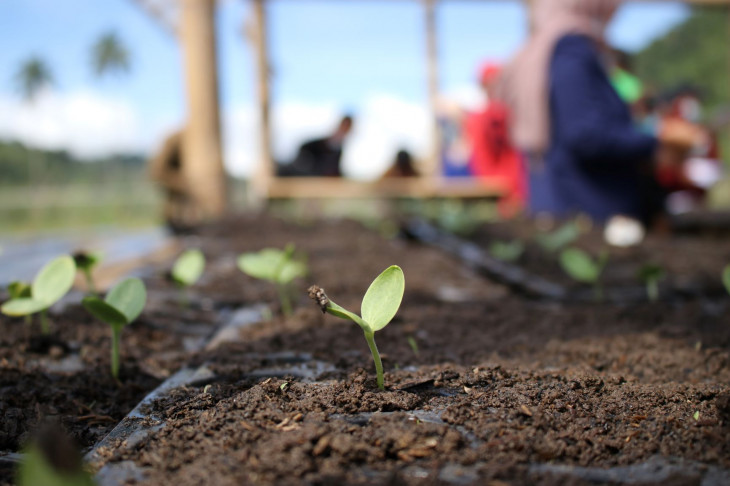 Watermelon seedlings started to sprout – a symbol of hope for farmer Basar.

“It feels good to share your acquired knowledge with your neighbors. We can benefit from what we learned for a long period of time, and it ties us closer, too,” he said.

Basar was eager to share more about his farming experience but time would not allow. There were many tasks to do at the farm.

He heaves another sigh, only this time, it is not of anguish but of joy.

Like the seedlings he sowed, a sprout of hope sprang up in Basar’s heart: hope for an abundant harvest, hope for a continuous calm, and hope for a brighter tomorrow for the people of Pagayawan. 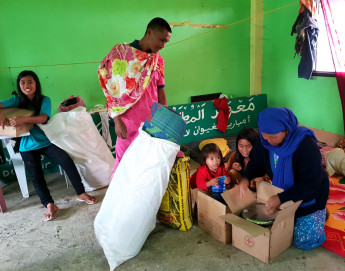 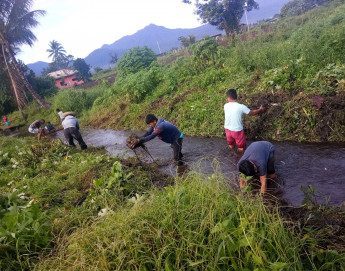 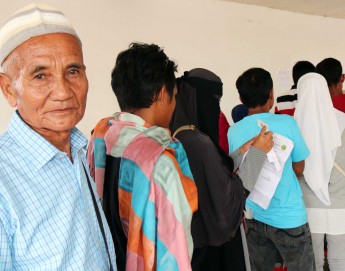