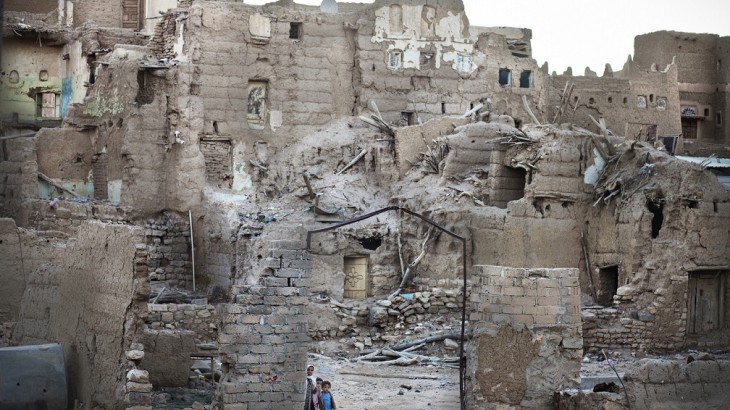 Sa’ada, Yemen (October 2017): The neighbourhood of Rahban, a World Heritage site, was severely damaged by airstrikes.

The International Committee of the Red Cross (ICRC) awarded the Humanitarian Visa d'Or yesterday to French photojournalist Véronique De Viguerie for her report on the impact of the conflict in Yemen on its people. This year's theme was urban war and the consequences for people forced to hide or flee, fearing for their safety and enduring shortages of food, water, health care and shelter.

Entitled "Yemen: The war they're hiding from us", Véronique de Viguerie's photo-reportage focuses in particular on Yemeni women, paying tribute to their struggle for survival in urban areas. These women have stepped up to fill many of the places left by men, becoming the heads of their household and caretakers for the community.

"It's gratifying to have my work recognized by a jury of respected professionals. But more than that, I hope this award will draw attention to the hidden conflict in Yemen and the terrible humanitarian situation there," said Véronique de Viguerie. "It was quite an ordeal reaching the north of the country, but once my reporting partner, Manon Querouil, and I got there, we forgot all the obstacles in the face of people's suffering. I just wanted to tell the story of their daily struggle to survive."

"This award has shed stark new light on one of today's worst humanitarian crises. Véronique de Viguerie's series of ten stirring photos is a reminder that civilians must always be safeguarded, relief efforts must never be obstructed and, more generally, international humanitarian law must be followed at all times and in all circumstances," said Frédéric Joli, the ICRC's spokesperson in France.

Véronique de Viguerie's work will also be on display at the 30th edition of the Visa pour l'Image international photojournalism festival in Perpignan in September. She will officially receive her prize, and the 8,000-euro prize money, at the prize-giving ceremony on 6 September.

Who is Véronique de Viguerie?
Véronique de Viguerie is a French photographer based in Paris. She works with Getty Images and Verbatim Photo Agency. Since 2006, she has reported on events in many places, including Algeria, Guatemala, Iraq, Kashmir, Lebanon, Mali Mexico, Niger, Nigeria, Pakistan, Somalia and Syria. Her photos are regularly published in Paris-Match, The New York Times Magazine, Newsweek, El País, Stern, Der Spiegel, Le Figaro Magazine, GEO, Marie Claire, The Mail on Sunday and The Guardian.