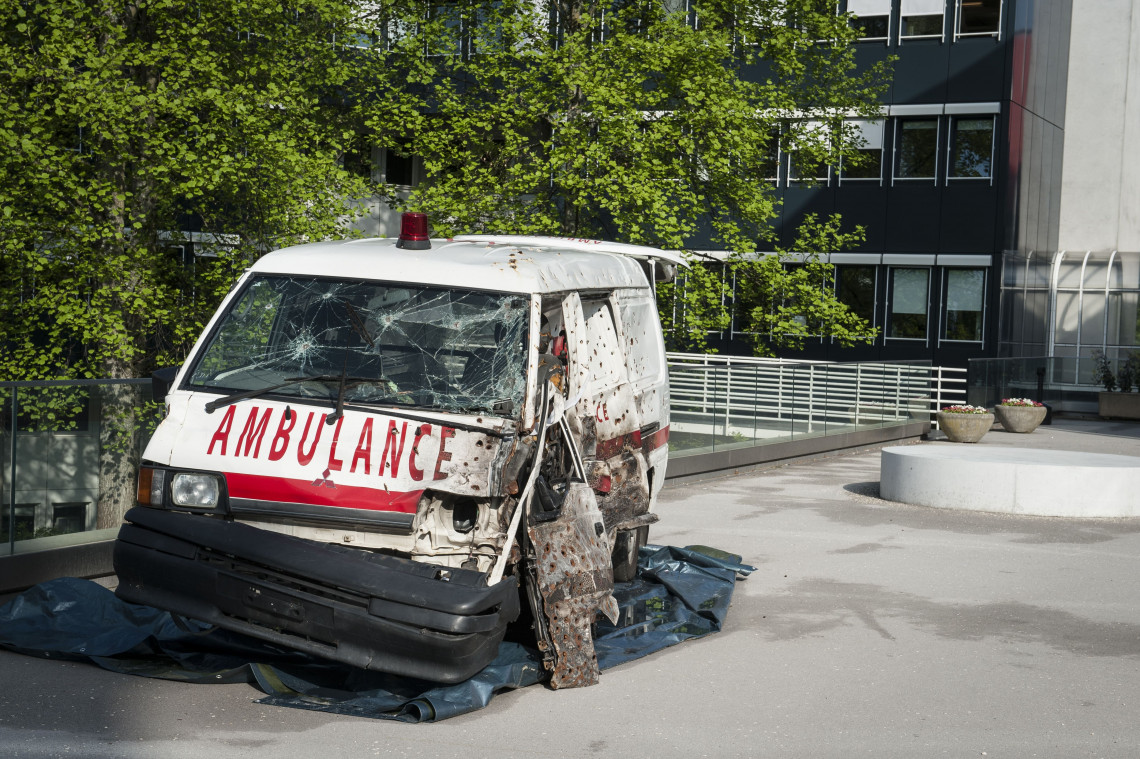 Security Council open debate, protection of civilians in armed conflict: Speech given by Mr Peter Maurer, President of the International Committee of the Red Cross.
Statement 25 May 2021

Chair, excellencies. Thank you for the opportunity to brief you and to China for convening today's open debate.

Since my last briefing on the Protection of Civilians we have seen global fragility deepen due to the converging challenges of armed conflict, the pandemic, economic downturn, rising inequality and climate change.

In conflicts we are witnessing vicious cycles of violence with political, ideological, ethnic, religious and criminal motivations intersecting; and violations of basic norms leading to massive protection challenges.

At the macro-level we are struggling with issues such as the fragmentation and proliferation of actors, the privatization of warfare with private military and security companies entering battlefields, widespread availability of weapons, and urban violence.

War and violence within and between States and non-state armed groups becomes even more complex with inter-community violence spreading in many contexts.

The result is that individuals and local communities face elevated risks and barriers. Those already at the back of the queue - women, children, people with disabilities, minorities, the elderly - are hit hardest and are increasingly marginalized.

The ICRC recently released its first comprehensive report showing the systemic impacts of COVID-19 on communities shouldering the double burden of war and disease. I would like to focus my briefing today on these observations, in light of the serious and compounding protection challenges that are emerging.

It is obvious to all of us, that the pandemic has not solely been a health crisis: it has intensified existing protection needs and created new concerns.

Colleagues, while the need for robust health care systems has perhaps never been greater, paradoxically, health care is under attack.

Five years since the UN Security Council demanded an end to impunity for attacks on health care, our observations in 40 countries affected by conflict show that attacks on healthcare have gone unabated; healthcare delivery continues to be impeded due to disregard for international humanitarian law. We have also seen an increase in cyber-attacks against healthcare facilities.

Clearly not enough is being done to protect health care workers and medical facilities; to translate resolution 2286 into action.

We cannot allow hospitals to be bombed with impunity; For the ill and injured to die needlessly; For diseases to spread unchecked; or for lifesaving vaccines to be reserved for the privileged.

This global crisis brings with it a compelling imperative for change. Collective action to look after the most vulnerable people in societies has never been more vital.

We need a fundamental change of behavior of belligerents in conflicts. We need political solidarity, investment in basic infrastructure and services; We need better protection for civilians and more substantive and broader support for humanitarian action.

This is the urgent task for Council Members: we have seen how the decisions made here – or the lack of decisions – can have enormous and devastating humanitarian outcomes around the world.

Today I bring to your attention five key calls that we believe will strengthen the protection of civilians:

One, parties to conflict, and all those with influence over them, must respect international law and protect civilians.

Respect for IHL is a fundamental but forgotten part of the narrative on COVID-19.

The pandemic has shown us the corrosive effects on societies when IHL is violated. The destruction of health systems and essential services has led to large-scale displacement; and limits people's ability to withstand future shocks.

Additionally, we call for rapid and unimpeded humanitarian access to populations in need. While neutral and impartial humanitarian organizations must respect national and international legal rules, States have the obligation to facilitate their work, not to hinder them with dubious and vague references to sovereignty and security.

Two, we ask States to prioritize the full implementation of resolution 2286 by taking concrete steps to protect healthcare.

States supportive of this resolution should lead by example and implement measures including: national policies to ensure the translation of international frameworks into concrete protective measures; military doctrine and practice that protects healthcare in conflict, including in partnered military operations.

Three, and more precisely, we expect members of the Council to act more decisively to improve their own action and leverage their special relationship with allies, partners and proxies to respect IHL.

We won't see better respect of the law if members of the Council continue to call out others, while at the same time excluding themselves and their allies and proxies from critical review. Scrutinizing your own military operations and leveraging relationships in order to improve IHL is critical.

Today, nobody fights wars alone. Through arms transfers, training, equipment, advice, assistance, intelligence cooperation, capacity building, information and logistical support, members of the Council engage directly or indirectly in military operations around the world where, at times we see violations of IHL.

Simultaneously, little consideration is offered on how respect for the law can be enhanced by improving a State's own operations and leveraging influence to foster respect for the law and protection outcome for civilians and others not fighting. The ICRC, in a recent study "Allies, partners and proxies", has proposed a framework for strategic reflection on how to minimize risks of violations and maximize protection outcomes in such situations.

We stand ready, bilaterally and multilaterally, confidentially, diplomatically to work with you to achieve better outcomes.

My fourth call is to encourage States to invest in local responses and prioritize community engagement and trust-building before, during and after crises.

We have seen the dangers when communities fail to trust the measures implemented by governments during COVID-19; and we have seen the rapid spread of misinformation, disinformation and rumors, which can result in violence against health workers and first responders.

Inclusive responses should also include equitable access to vaccines and medicines – both between countries and within them so that no population is excluded, such as those living in areas controlled by non-state armed groups. This is critical not only to live up to ethical imperatives and to overcome the pandemic, but also to prevent further entrenchment of the systemic weaknesses revealed by this crisis.

Five, we call on States to strengthen health, water and sanitation services, and protect them at all times in accordance with the rules of international humanitarian law.

The poor state of essential services may have accelerated the trajectory of the COVID-19 pandemic, but on the flipside, the ICRC also sees how the rehabilitation of infrastructure and capacities pays dividends in a major emergency.

Strengthening essential services in conflict-affected areas is not only a technical matter – it requires political support. And the ICRC was pleased to see last month, under Vietnam's presidency, all 15 members of the Council co-sponsored Resolution 2573 urging all parties to armed conflict to protect civilian infrastructure. We congratulate you on the unanimous adoption of this resolution and we call now for its full implementation.

The ICRC continues to call on all parties to armed conflict to avoid the use of explosive weapons with a wide impact area in populated areas, due to the significant likelihood of indiscriminate effects. We strongly support the ongoing diplomatic process to adopt a Political Declaration to strengthen the protection of civilians from the use of these weapons.

With strong political will, we can build on the good practices and progressive ideas emerging from the pandemic into longer-lasting policies to address individual and systemic drivers of vulnerability.

These practices include for example the expanded access for asylum seekers, refugees, other migrants and the internally displaced to social safety nets and social protection systems.

Or the increased use of non-custodial measures to decongest prisons and the use of technology to facilitate contact between detainees and their families.

There is much we can do – and so much of it depends on political support.

The ICRC offers its expertise and advice to States and we look forward to engaging with you further.