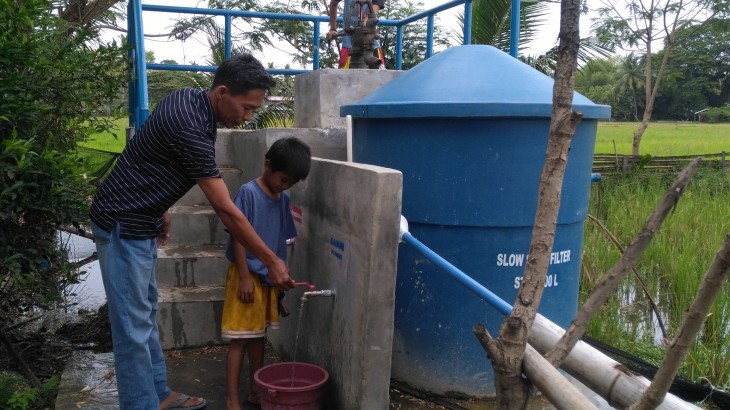 More than 16,000 residents and evacuees in Datu Saudi Ampatuan, Maguindanao, will have access to potable water through the hand pumps with slow sand filters built by the ICRC. ©ICRC/Z. Pangato

The barangays of Elian, Dapiawan, Madia, Kitango, and Salbo, all in Datu Saudi Ampatuan municipality in Maguindanao Province, are now better equipped to host displaced families whenever armed clashes erupt in the interior villages. Since 2003, civilians fearing for their lives have sought temporary shelter in these areas due to their strategic location and proximity to their homes.

Given that potable water and sanitation are among the basic needs of communities affected by the repeated clashes between government forces and armed groups in Maguindanao, the International Committee of the Red Cross (ICRC) built hand pumps with slow sand filters in 14 sites in Datu Saudi Ampatuan and in February turned over the project to the host barangays. This project aims to improve access to safe drinking water for people affected by conflict and for host communities to better cope with the influx of evacuees.

"Due to the unpredictable situation in Maguindanao, the ICRC continues to equip and help prepare identified evacuation centers and host communities for future displacements," explained Tomoko Matsuzawa, head of the ICRC office in Cotabato.

The facilities will benefit more than 16,000 people, both residents and evacuees. The ICRC also built toilets in all 14 sites that were identified as evacuation centers in the event of hostilities.

Prior to the handover, orientation sessions were held by ICRC engineers to help the residents operate the facilities, particularly the slow sand filters. Each community received a spare hand pump. The ICRC regularly monitors the water quality to confirm its potability and safeguard the health of the communities.

The Datu Saudi Ampatuan water and sanitation project drew on the experience and expertise of the ICRC in responding to the needs of conflict-affected communities in the Philippines and around the world. Similar water and sanitation facilities were constructed in nine sites in three barangays of Datu Salibo in 2015 to help local communities cope with the immediate needs of the conflict-affected civilians.