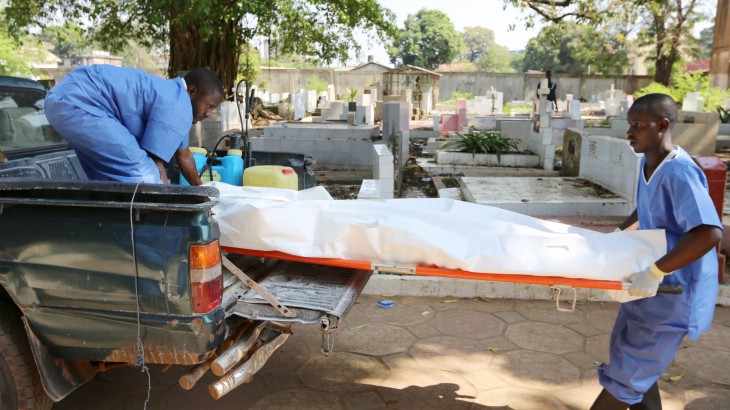 Volunteers from the Red Cross Society of Guinea bury an Ebola victim. They have been burying an average of two bodies daily during the Ebola outbreak. © International Federation / Moustapha Diallo

The International Red Cross and Red Crescent Movement is deeply concerned about continued violence perpetrated against its volunteers in Guinea. Due to the fear and mistrust surrounding Ebola virus disease, Red Cross staff and volunteers have regularly been attacked by scared communities.

The most recent incident took place on Sunday 8 February in the town of Forécariah, Western Guinea. Two Red Cross volunteers were beaten while attempting to provide a safe and dignified burial in the community. An average of ten attacks per month have been committed against Red Cross volunteers in Guinea since last July, ranging from verbal to physical assaults.

"Red Cross volunteers in Guinea are working day and night to keep communities safe," said Youssouf Traoré, president of the Red Cross Society of Guinea. "Acts of violence committed against them are completely unacceptable."

Any action that hinders the work of those responding to the Ebola epidemic prevents whole communities from getting the help they need. Safe burials are a vital part of the response to drive down the number of cases. When Red Cross teams cannot access communities and ensure burials are done safely, entire communities are put at risk.

"As long as people have misconceptions about how Ebola is spread – and continue to prevent volunteers from doing their work – we will not stop the disease," said Traoré. "We may have all the medical equipment we need to care for people, but until we change perceptions of the disease, it will not go away."

Since the beginning of the outbreak in March 2014, the Red Cross Society of Guinea has been actively engaged in dispelling the rumours and myths surrounding the disease. More than one million people have been reached using various communication channels. In consultation with communities, religious leaders, families and individuals, the Red Cross has helped find alternative and dignified ways for families, friends and communities to pay their respects to the dead while reducing risk of infection. By working with volunteers and using radio and television, the Red Cross has shared knowledge, tackled fear and reduced stigma.

"Community engagement remains critical if we want to get cases to zero," said Traoré. "Communities must understand the risks related to this disease and the positive contribution Red Cross volunteers can make to their safety."